As if part of a different cultural history, The Fellowship of the Ring settled into theaters only a few months after 9/11. One wonders if, beyond marketing and a built-in fanbase, if Lord of the Rings might actually catch on pop culture as it did were it released elsewhere in time.

Realistically, Lord of the Rings, for mainstream audiences, is stuffy and bloated. There are so many places, so many things, so many characters, it’s unusual that hard fantasy succeeds this sensationally. But then consider what Fellowship of the Ring is – a story about divided races coming together, and two Hobbits embracing their friendship openly in support of one another.

Time whittles Fellowship of the Ring’s spectacle, if not its storytelling

Of course, Lord of the Rings existed decades before Peter Jackson went behind the camera, but the film trilogy – unknowingly when production started – hit on a period of anxiety, when things like orcs and trolls so effortlessly defied reality. An escape, pure and epic as they come.

Although a single chapter, Fellowship of the Ring digs up a foundation, thematically striking against the overwhelming scale evident in later films. Two Towers convincingly displays war’s cost, Sauron’s army tearing down trees, leaving their land barren, only to build weapons. Then the ring itself, a representative of ruthless greed, less a power symbol as in other sword and sorcery fiction than a meaningful call to find those capable of resisting the urge.

Great stories translate to any era or time. Initially published amid the Red Scare in the ‘50s, Fellowship of the Ring complements a decade fraught with distrust. People see Frodo (Elijah Wood) adversely when they know he’s holding the ring. Fellowship of the Ring becomes a morality play about defying an urge to fight, always running and avoiding where possible rather than let those worst feelings overtake logic. So it was true in the ‘50s, and so in the ‘00s.

Time whittles Fellowship of the Ring’s spectacle, if not its storytelling. What was once a feature pushing digital effects forward now limps across the screen. Added resolution does the expansive composites no favors either. But this is all an illusion, never quite real or perfect. What the mind conjures reading Tolkien’s books isn’t precise either. There’s room for faults and nagging issues when amid glowing eyes on mountains, massive trolls, and warring wizards. Certainly, there’s no loss in the epic quality. 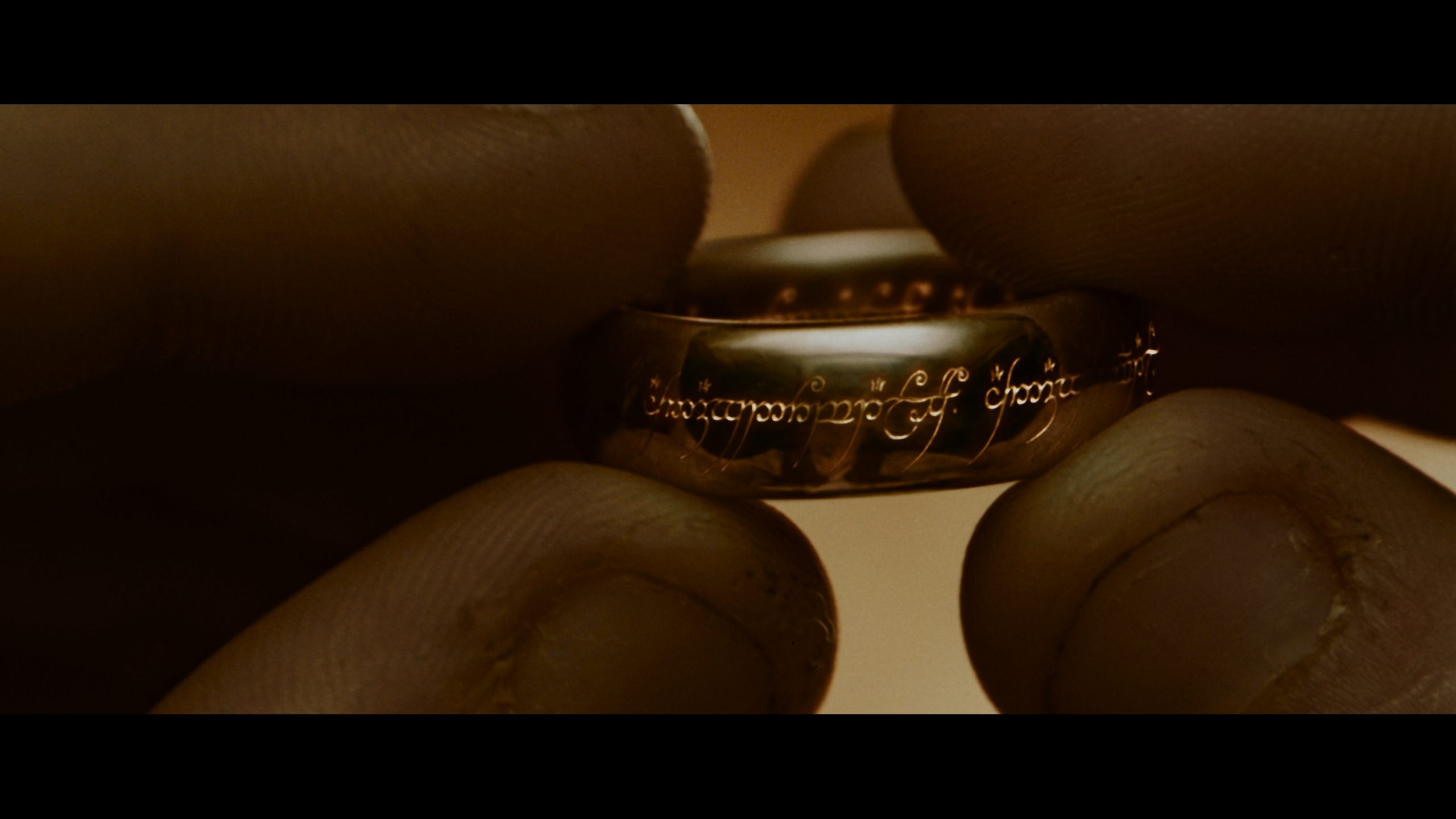 Being of the early ’00s, Fellowship of the Ring isn’t without some complexities. Digital composites represent a resolution challenge, notably lacking in refinement, but also smothered at times. Look at the waxy faces when Bilbo first invites Gandalf in, both characters mushy. To a lesser effect, those same issues mar those epic wide shots if any CG intrudes.

Of some concern before, color grading settles down. Variety in aesthetics bring warmth to Hobbits, a chill to Saruman, and harsh ashy gray under Sauron. No longer does a green tint intrude, allowing room for primaries, even if teal does retain a presence. Dolby Vision then expands things, boasting better dimension to the dimness near the towers. Warner’s HDR doesn’t elaborate, just accentuate, striking in highlights, and delicately pushing shadows into greater richness.

Invigorated by Atmos, an already high-end home theater staple gains substantially via this mix. Ridiculously precise motion expands on a stellar, world class design, working the heights and additional rears. Sound takes up position as needed, whether something minor like a fireworks display or massive, clashing battles where mounted armies charge forward, and arrows sling between speakers. Voices pan too, split wherever needed, fearless in moving away from the center. Natural transitions occur faultlessly, nothing missed or spared. Even ambiance swells, like birds rustling leaves in the overheads.

Likewise, LFE reaches room-sharking proportions. Volcanic eruptions and stampedes boast range rarely heard, living up to an overused term, “thunderous.” Or, maybe “earthquake…ous” fits better now. Attacked by the cave toll, the mammoth weight coming from the low-end is marvelous. The same for an avalanche. It’s easy to praise the action, which of course represents the peak of home theater prowess, but don’t discredit the score, equally boomy. Then someone slams a sword into flesh, and that impact overshadows any music.

Both theatrical and extended versions (extended taking up two discs) and nothing else, but Warner plans a loaded edition in 2021. Purchase accordingly.

Fellowship of the Ring

While time sapped the visual effect’s prowess, at its heart, The Fellowship of the Ring maintains its raw fantasy, and works in the now as it did when first published.