William ‘Bill’ S. Preston Esq. (Alex Winter) and Theodore ‘Ted’ Logan (Keanu Reeves) are finally back! The slacker music icons return for one last screen adventure in Bill & Ted Face The Music. Thirty years after making their mark on comedy in the classic Bill & Ted’s Excellent Adventure and the even funnier sequel, Bill & Ted’s Bogus Journey, the duo must save the future of humanity once again with their bodacious music. This time it’s a family affair as their daughters Thea & Billie help out. Most excellent, dude!

The premise for the Bill & Ted movies has always been stupid fun and amazing chemistry between its titular characters, a formula mostly repeated here with good intentions. Directed by Dean Parisot (Galaxy Quest) and written by Chris Matheson and Ed Solomon, the nostalgia bait should work for older fans who grew up with these characters back in the 1990s. If you believe in the power of Wyld Stallyns, Bill & Ted Face The Music will put a smile on your face despite missing George Carlin’s immense presence as Rufus. Rufus briefly appears in hologram form, if you are wondering.

William Sadler reprises his funny turn as Death in a small supporting role. Samara Weaving and Brigette Lundy-Paine capably play the iconic screen pair’s daughters, whose characters take after their dads in nearly everything. Bill & Ted have been plugging away as Wyld Stallyns since we last saw them, still looking to fulfill their musical destiny. The now middle-aged men remain the world’s biggest slackers, putting huge stress on their wives back in San Dimas, California.

The two men set out on one more time-travel adventure when Rufus’ daughter from the future warns them that only their song can save humanity. Helped by their daughters, a group of music legends from across history are brought together for a time-shattering rock performance.

Traveling through time and repeatedly running into older versions of themselves, Bill & Ted seek out the song that will save everyone. Random music celebrity cameos include Dave Grohl and Kid Cudi. I kept hoping Kanye would show up for some reason.

Bill & Ted Face The Music is more passably funny than a slam-dunk laugh riot. The slacker buddy comedy certainly has its moments, mostly thanks to the remarkable timing between Reeves and Winter. The 2020 movie is a pleasant watch that remains true to the spirit of the first two movies, even if it’s a decidedly lesser outing. 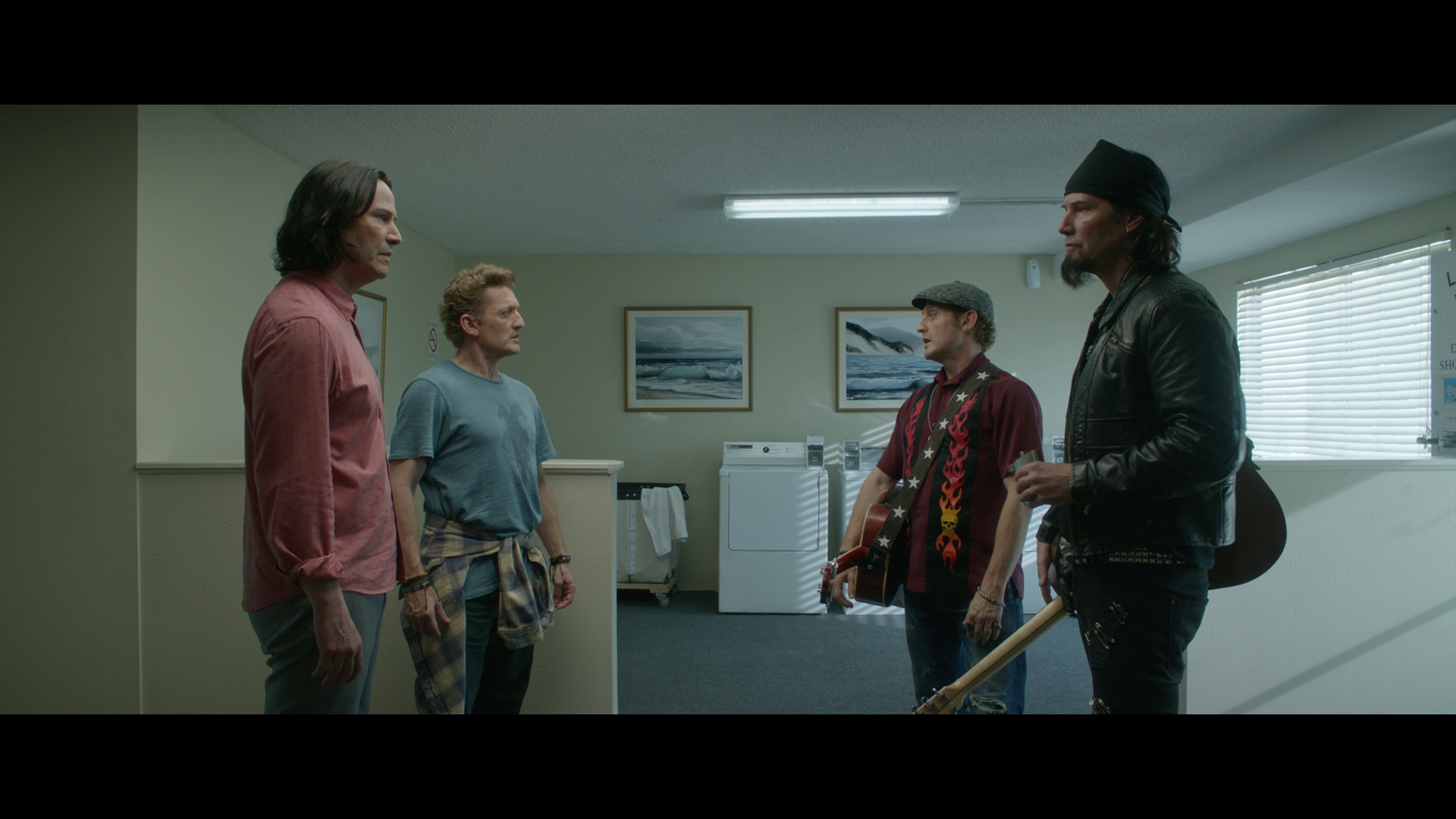 Filmed with ARRI cameras and finished at 4K with a full Dolby Vision pass, it’s somewhat disappointing that MGM/WB is passing on a UHD release in the States. A UHD will be made available in certain other territories like Europe. There’s absolutely nothing wrong with the Blu-ray or its immaculate transfer, likely taken directly from the movie’s digital intermediate with little alteration.

Bill & Ted Face The Music is a razor-sharp BD with high clarity. This is a bright 2.40:1 presentation at 1080P resolution that exudes crisp detail. The flawless video isn’t quite mannered enough for a true demo showcase but makes for a glossy Hi-Def viewing experience.

While the music in the film isn’t quite up to par with the more successful first two entries, everything sounds fairly powerful in a 5.1 DTS-HD MA track. The discrete audio design stretches its legs whenever the duo travels through time, often ending up in exotic locations like the future and even Hell.

The aggressive and consistent bass plays well with the upbeat score. Dialogue has excellent placement in the front soundstage and doesn’t get lost in the bigger dynamic moments. The finale’s big musical scene offers critical immersion and well-done channel separation.

While Bill & Ted Face The Music is distributed by WB, it’s an MGM property. That means the included digital copy isn’t compatible with Movies Anywhere. The digital copy allows you to redeem the movie on the provider of your choice. Redeeming on VUDU gives you the movie in HDX quality.

The regular BD release has a glossy slipcover available on first pressings. The big special feature is the complete Comic-Con panel with most of the starring cast appearing, hosted by fanboy Kevin Smith.

The Official Bill & Ted Face The Music Panel at 2020 [email protected] (43:14 in HD) – Due to Covid, Kevin Smith hosts an engaging virtual panel with most of the film’s key players, including Keanu Reeves and Alex Winters. It’s an enjoyable dynamic and group discussion that brings out more natural conversation than panels actually meeting in person. They discuss the intense audition process, how this movie finally came about, and more with the entire panel filling in when necessary.

Be Excellent to Each Other (01:22 in HD) – Keanu Reeves and Alex Winters briefly sum up their character’s philosophy.

A Most Triumphant Duo (01:17 in HD) – Crew discuss the pair’s enduring popularity.

Keanu Reeves and Alex Winters return for a goofy but enjoyable last ride into the sunset, this time helped out by daughters that take after their dads.

The 15 unaltered images below represent the Blu-ray. For an additional 41 Bill & Ted Face the Music screenshots, early access to all screens (plus the 120,000+ already in our library), 120 exclusive 4K UHD reviews, and more, subscribe on Patreon.