There’s a cop in the McCallister home when Home Alone begins. Usually, that’s an event in a suburban residence. Everyone stops and pays attention. Not here.

Partly, it’s plot development. That officer is Joe Pesci, less a law enforcer than a law breaker scoping out the neighborhood. More importantly, it’s the chaos. The panic. Home Alone is a Christmas movie not for the lights and decorations. Instead, it’s about how uncontrolled modern life made the holiday season, everyone aimlessly running, never a moment to breathe.

Home Alone earned its popularity through 20-minutes of cartoon lunacy. Blowtorches, glass ornaments, nails, irons. It’s ludicrous, but fun. In his own way, Kevin McCallister (Macaulay Culkin) experiences an adult Christmas after his parents leave him behind. He shops and when back home, prepares for the inevitable. His gifts though don’t have wrappings, just pain.

Home Alone still works because ultimately, no one sits down to talk anymore

Entertaining as it is, the most truthful moment in Home Alone is one without any of that mania. There’s no panic, just conversation. Kevin enters a church, sits next to a man he believes is a slasher movie villain, and they talk. Just talk. Barriers comes down. Both take away a life lesson, and that only happens because the quiet around them let it happen.

The scene works because this is four movies in one, perfect to encapsulate the thematic bedlam. There’s Kevin’s parents rushing to get back home, exaggerating travel’s misery at year’s end. Counter to that, a kid’s fantasy, a second grader left alone to eat gallons of ice cream and binge movies. Home Alone uses heist movie tropes for comedy, both Daniel Stern and Pesci wonderful incompetents when paired together. Finally then is a true Christmas movie – values, warmth, love, joy. Still funny of course. After rushing home on connecting flights and toughing it out in a rental van with a polka band, Kevin’s mom (and then everyone else) ditches Kevin in the main hallway. It’s just too busy to celebrate anything, even a reunion.

Credit the script team too who do a remarkable job in making this all plausible. Events all coalesce to make the mistake believable in a way movies contrive to make them so. Phones knocked out out, power outages, miscounts, spilled milk, neighbors away for the weekend; the scenario makes sense, batting away those in the audience trying to pick up on logic faults.

Of course, even without that series of events, Home Alone still works because ultimately, no one sits down to talk anymore. No wonder we forget people – even kids. 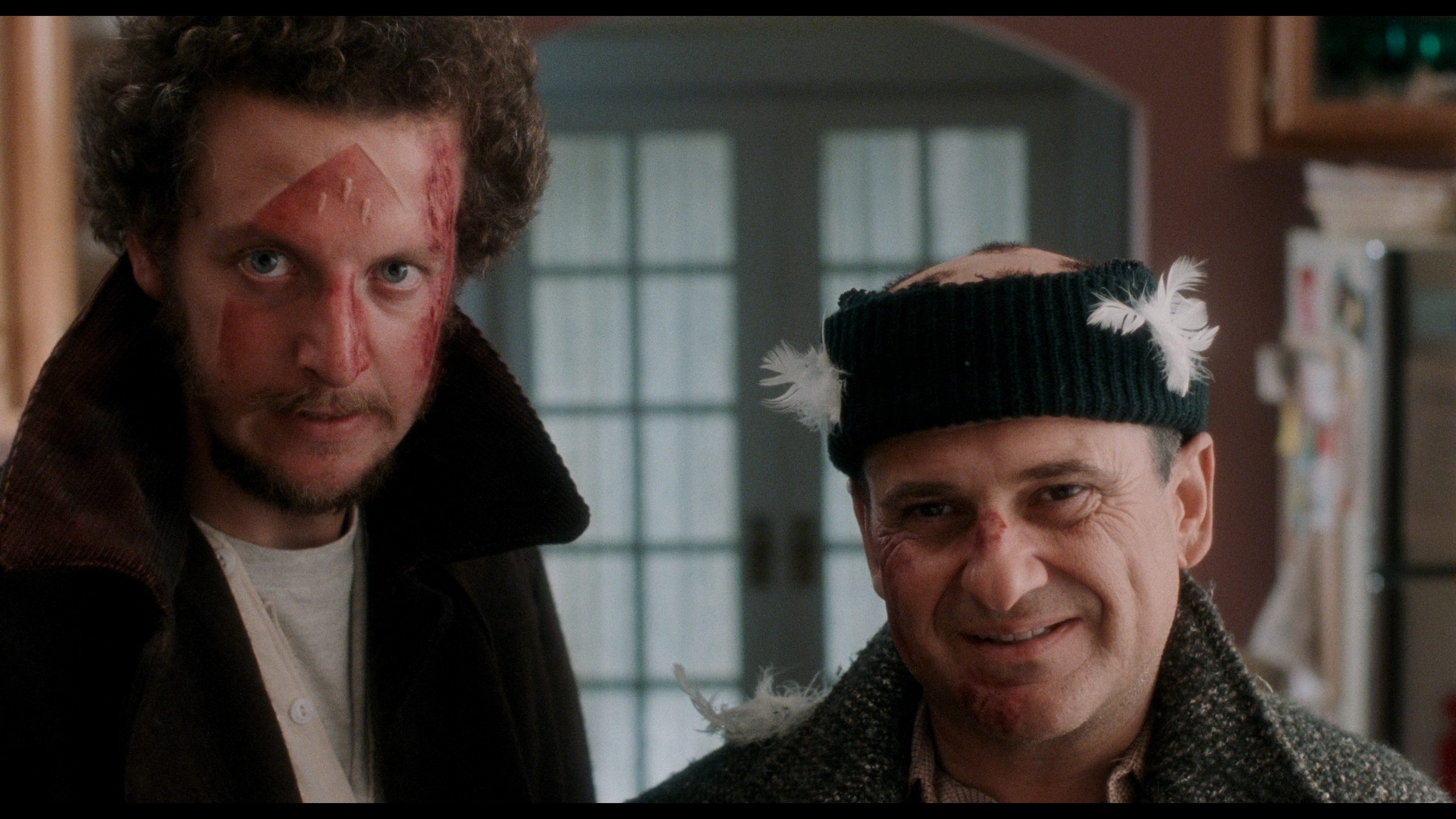 Disney handles the 4K release, sourced from a sharp, consistent print. Grain management draws some minor ire, sticking on occasion, but generally resolved and pure. Any processing remains nearly invisible, and without damage to image integrity.

Detail flourishes in this context. Texture quality excels when displaying the McCallister home in its idyllic upper class setting. Bricks and trees all sharply define. Close-ups draw detail on Culkin’s face in addition to clothing and other items. Medium shots offer equal resolution, certainly a true 4K master given the fidelity.

Christmas allows the HDR to swell, sensationally bright when handling the lights. Strings adorning houses and even interior lamps bring a newfound glow to Home Alone, and not betraying the source. Black levels add their own heartiness, potent as needed to keep depth/dimensionality stable.

Transferring the 5.1 DTS-HD track, Home Alone’s sedate design barely utilizes the soundstage. Kids running through the house fills the fronts, but minus any particular discrete stereo use. Kevin’s traps make limited travels between speakers. If anything, it’s the score spreading out, accentuated nicely, that reminds listeners this is a surround mix. Although, to be fair, planes do pan front to back a few times.

LFE barely reaches a whimper. The blowtorch trap and music dig in a bit, but not much.

There’s nothing on the UHD. The included Blu-ray begins as it did in previous releases – a Chris Columbus and Macaulay Culkin commentary. A fun making-of almost hits 20-minutes, a stunts featurette a bit over seven minutes. Overseas dubs, a ‘90s EPK, the movie-in-the-movie, and theories on Buzz are explored briefly. Deleted/alternate scenes and bloopers run up the tally.

Remembered for its cartoon violence, Home Alone is more than that though: A clever commentary on the modern holiday experience.