Of course Disney turns the ghastly Salem witch trials into something colorfully charming. Given how many parents the studio killed in their animated stories, ritualistic hangings and burnings doesn’t strain their imaginative touch.

There’s a lot of old horror in Hocus Pocus. Notably, the kids trying warn adults about the incoming terror, then left to their own devices when parents shrug off the danger. The cauldrons, the witches brew, Grimms-esque children eating; Hocus Pocus begins on solid, familiar footing.

Classic storybook flourishes bring a (then) new early ‘90s touch, notably the clashing US coastal cultures centered on Max (Omri Katz) who plays the role with typical teen angst. He hates his sister, hates the new town, and hates life. Then a couple witches try to eat his sister and Max comes around to things… quickly.

Hocus Pocus is the witch’s movie; they’re less villains than protagonists. Bette Midler, Sarah Jessica Parker, and Kathy Najimy own Hocus Pocus, delightfully campy and overplayed, genuinely clever too as they sort out modern society. More than fish-out-of-water playtime, the joke doubles up as late 1900s living suits them just fine. Much as Hocus Pocus pokes at their naivety, a kitchen serves as a suitable torture chamber. A gas stove is only a more convenient child broiler compared to their coal oven.

It’s a lightly morbid fairy tale in that way, wrapped around real world history, filtered through a PG-rating. Munching on grade schoolers isn’t difficult to fit into that frame. Hocus Pocus deals in surprising sexual undertones, lost on the intended pre-teen demographic, yet giving the script a lasting vitality. Parker’s witch is all in for foreplay and seduction. An encounter with a bus driver leads to an exchange about wanting kids; the driver retorts, “Hey, it may take me a couple of tries, but I don’t think there’s gonna be a problem.” Never mind the virgin-lit candle that puts Hocus Pocus in motion, a startlingly judgmental running joke at a time when teen pregnancy was an adamant sociological concern.

For its mass market entertainment appeal, Hocus Pocus succeeds. It’s soft, harmless, but smart. Casting finds a leading trio who make the material breathe, overwhelming the other key players, and like a slasher movie, makes fans not from the heroes, but the villains. 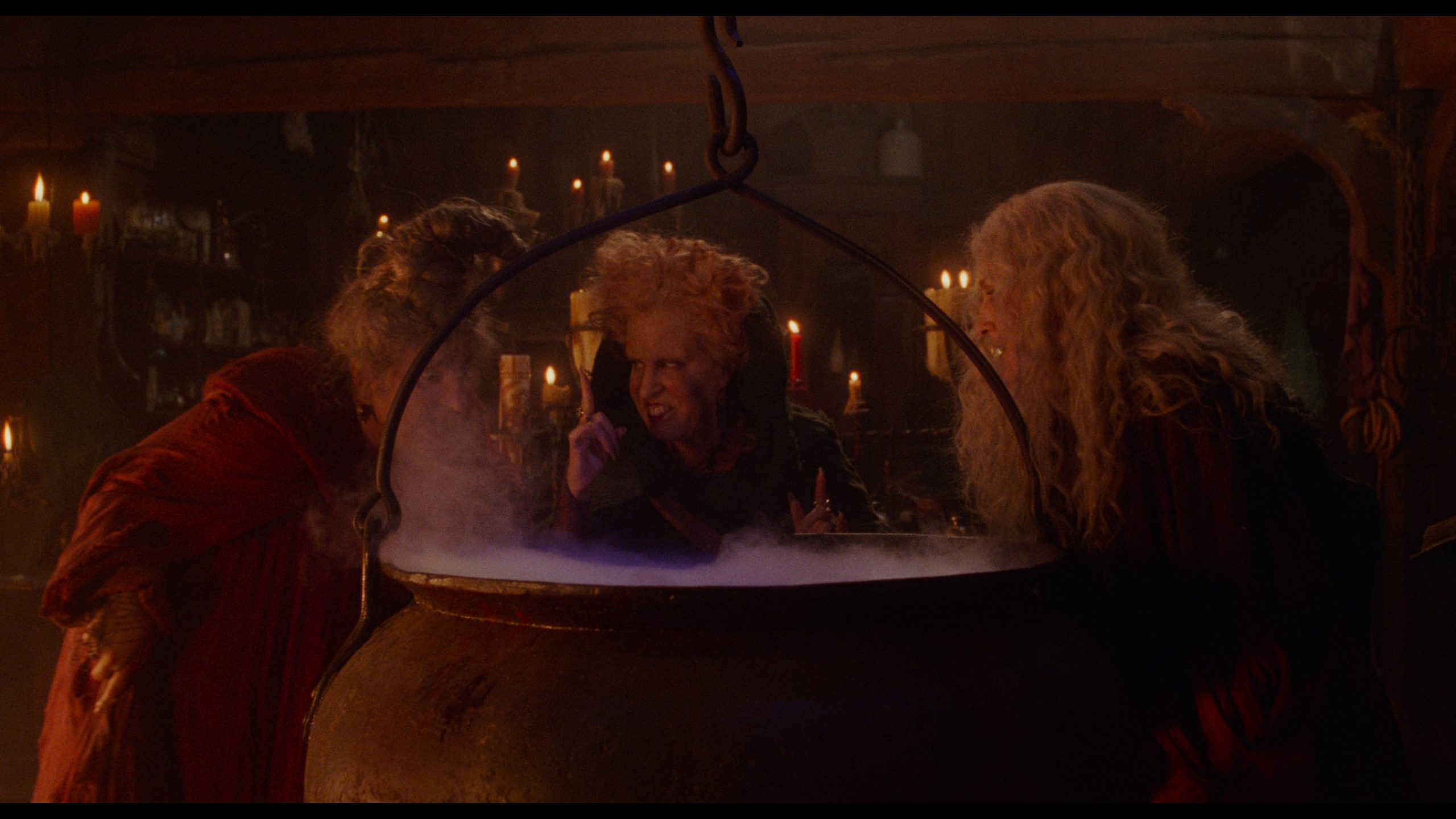 Disney turns up a firm new 4K master for this release. Clean grain structure doesn’t hide the strong resolution, sharpness high at all times except for digital effects. The CG cat causes visible lapses, unavoidable in their age and technology. Otherwise, textural details excel, beautifully rendered whether in close or at range. Wide shots resolve sets and towns flawlessly.

The HDR pass adds slight zest to candles and finger lightning. Pleasing brightness brings a slight jump, nothing incredible, but better. The real difference sits in black levels, generously dark, and other than (again) the digital effects, respectful to detail hiding within. Depth and dimension improve, giving Hocus Pocus life on a new format.

DTS-HD borrows the Blu-ray’s material, capable if lean. Range doesn’t push extremes, and the deepest jolt happens as the steel kiln door collapses to the floor. An earthquake bringing a zombie to life adds a small rumble. The score adds its own energy here and there, fine if unspectacular.

Discreet channels work harder, separating voices and tracking the witches as they pan around on their brooms. Thunder fills the soundstage. Ambient wind rushes between speakers to cover listeners in the effect.

The Blu-ray mirrors Disney’s previous disc, which means a short EPK and pop-up feature whose bonuses can only be accessed while watching the entire movie.

Hocus Pocus makes its witches into lovable villains, worth rooting for just to see them on screen longer.