Better than its TV series counterpart, Ultraman R/B’s epilogue movie locks into its theme of family, staying together, and the worries that life brings. Brothers Katsumi (Yuya Hirata) and Isami (Ryosuke Koike), after sorting out personal differences at the series’ end, now find adulthood pulling them in separate directions. College, career ambitions, and international studies present a challenge, not only for life, but this clever Ultraman iteration that requires both to defeat evil.

It’s fun and lively, comfortable in its anime-y splashes and flourishes. The genuine story fills only a quarter of the short runtime yet the expedience is impressive. Social isolation and indifference over a once promising videogame designer turned shut-in addict adds an understandable cause for the villain – he envies success and connection, going against Ultraman R/B’s theme for an accessible, purposeful plot.

Involving Ultraman Geed (because modern Ultraman finales always bundle superheroes), the scope expands, bettered by budget hikes. For the climactic brawl, Ultraman R/B becomes a future vision, skipping man-in-suits for an entirely digital Ultraman form, but set against the miniatures and practical monsters. While not perfect, it’s convincingly done, and allows for a spectacular in-air fight, totally impossible to do in front of a real world camera. After 25 episodes following traditional formula, the movie’s break allows a certain freedom to stage things in a visually arresting way, mournful as it is to see Ultraman so openly divesting from its gorgeous physical craftsmanship.

By picking up a year after the TV show, there’s some creative leeway and distance. There’s no need to rely on what was a conclusive finish. Most main characters do return, even if briefly, allowing for a familial fable of its own doing, not beholden to any plot thread/villain/conflict prior. And, while aiming at kids, there’s still room for some adult jabs, including a politician rambling on a news broadcast about Ultramen shattering infrastructure and forcing a tax hike to pay for it. Those world saving jerks busted a water pipe? Time to make them pay – literally.

Like the theme, Ultraman R/B clearly wants to bring people – families especially – together. Giant monsters, superheroes, and taxes do just that. 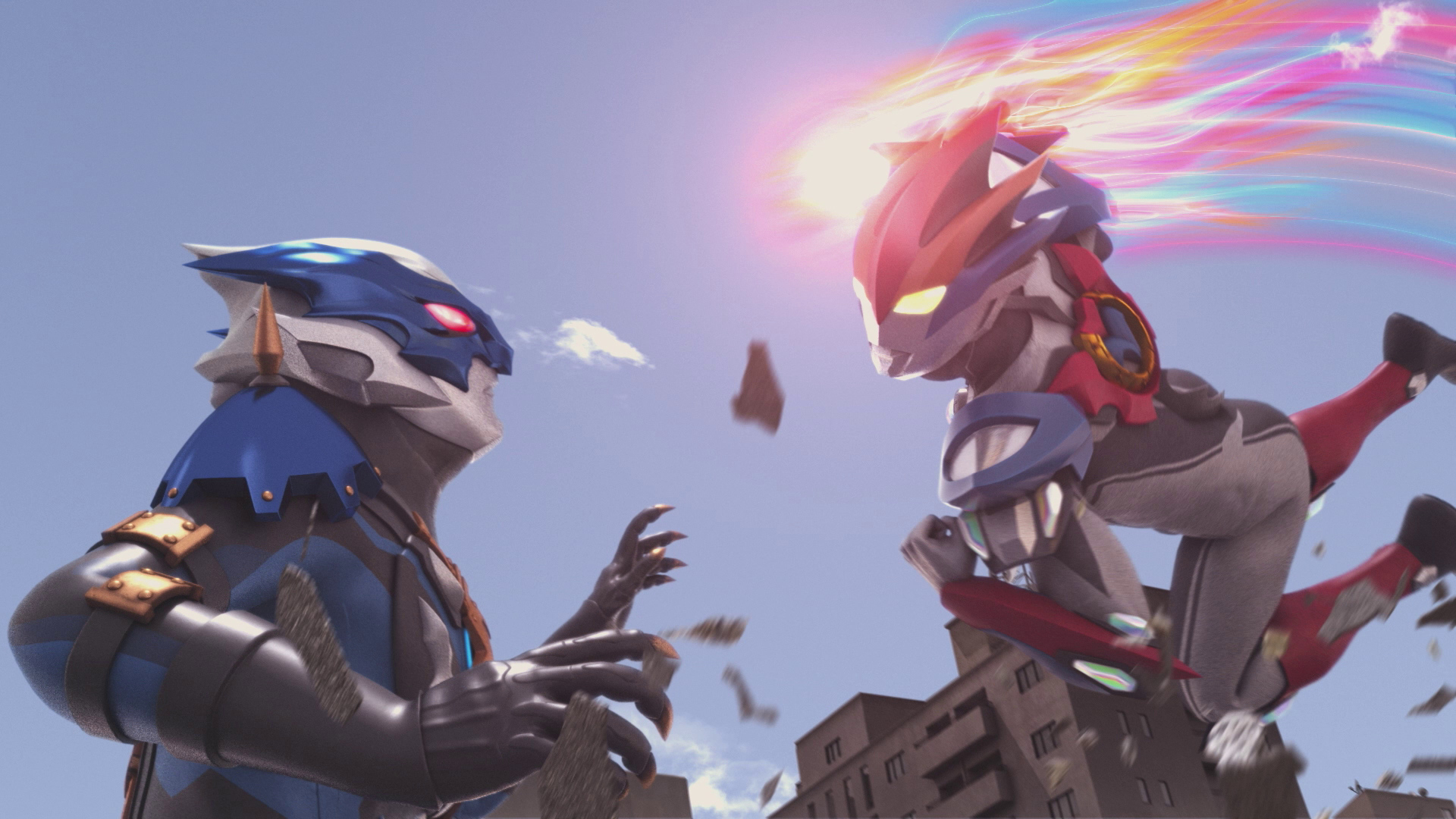 Visits to an alien planet and flashbacks add a little grit to the otherwise pristine digitally-sourced visuals. Mill Creek’s encode struggles a little, breaking down into mushier images in the process. A slight fidelity loss occurs as a result. Some banding during the climax pops up as well, likely more on the CG elements rather than the disc.

Nothing. Note the movie is available separately or in a bundle with the series. Either way, there’s no on-disc extras. The series does come with an episode guide insert.

A clean, speedy, and concise story helps Ultraman R/B stand out for more than its wild (even creative) action set pieces.

The 15 unaltered images below represent the Blu-ray. For an additional 36 Ultraman R/B screenshots, early access to all screens (plus the 120,000+ already in our library), 120 exclusive 4K UHD reviews, and more, subscribe on Patreon.