Your Friend in Time

Bob Gale and Robert Zemeckis made the same movie three times. They know it because they play with the repetition. By Back to the Future Part III, even the characters realize as much.

Watch when Marty McFly first wakes up to see Irish Lea Thompson at his bedside. Just before he stands up, McFly does a quick check to make sure he’s wearing pants, recalling the same incident in Back to the Future. It’s one thing to recall the obvious – Biff smothered in fertilizer, a jammed gun saving McFly – and another to show how aware the writing team was of their own work.

No time travel cinema is faultless, although Back to the Future Part III hides that better than most

The same, but different. There’s another dance, another Biff showdown, another panic about the future, another broken Delorean. However, Back to the Future Part III is less about McFly (Michael J. Fox) than it is Doc Brown (Christopher Lloyd). While once a comical caricature of Universal’s mad scientists, this trilogy-ender broadens Doc into an emotional, feeling person. It’s softened and charming, all set in an openly cliché western.

No time travel cinema is faultless, although Back to the Future Part III hides that better than most. The race to reset the timeline happens at a spectacular clip. As to not lose real world awareness, there’s a nudge to modern times as Doc denigrates a part’s Made in Japan stamp. “All the good stuff is made in Japan,” retorts McFly, taking a shot at then paranoia over foreign produced items, and worry that a rising Asian superpower might soon overtake the US. Kids had Nintendo though. What did they care?

If there’s an error in this series, it’s where McFly lands in the end. He’s back home, but in a timeline where his parents don’t represent his actual parents in his original timeline. Sure, Biff (Thomas F. Wilson) receives a villain’s fall, now subservient to Marty’s dad. That’s successful, but dominating, the thing McFly sought to overcome in Back to the Future Part II. The series never expanded on George McFly (Jeffery Weissman); blame Crispin Glover for refusing to return. Doc’s adage though of making one’s own future says McFly will be okay. He has goals, and somewhere to begin given his father’s success, even if that’s an admission that lower middle class living makes that almost impossible, and more masculine brutishness makes a winner.

But again, Back to the Future Part III is Doc’s movie. He leaves happy. Mary Steenburgen makes a delightful counterpart, enough to believe that no matter where Doc ends up, he’ll make due and love it, future or otherwise. 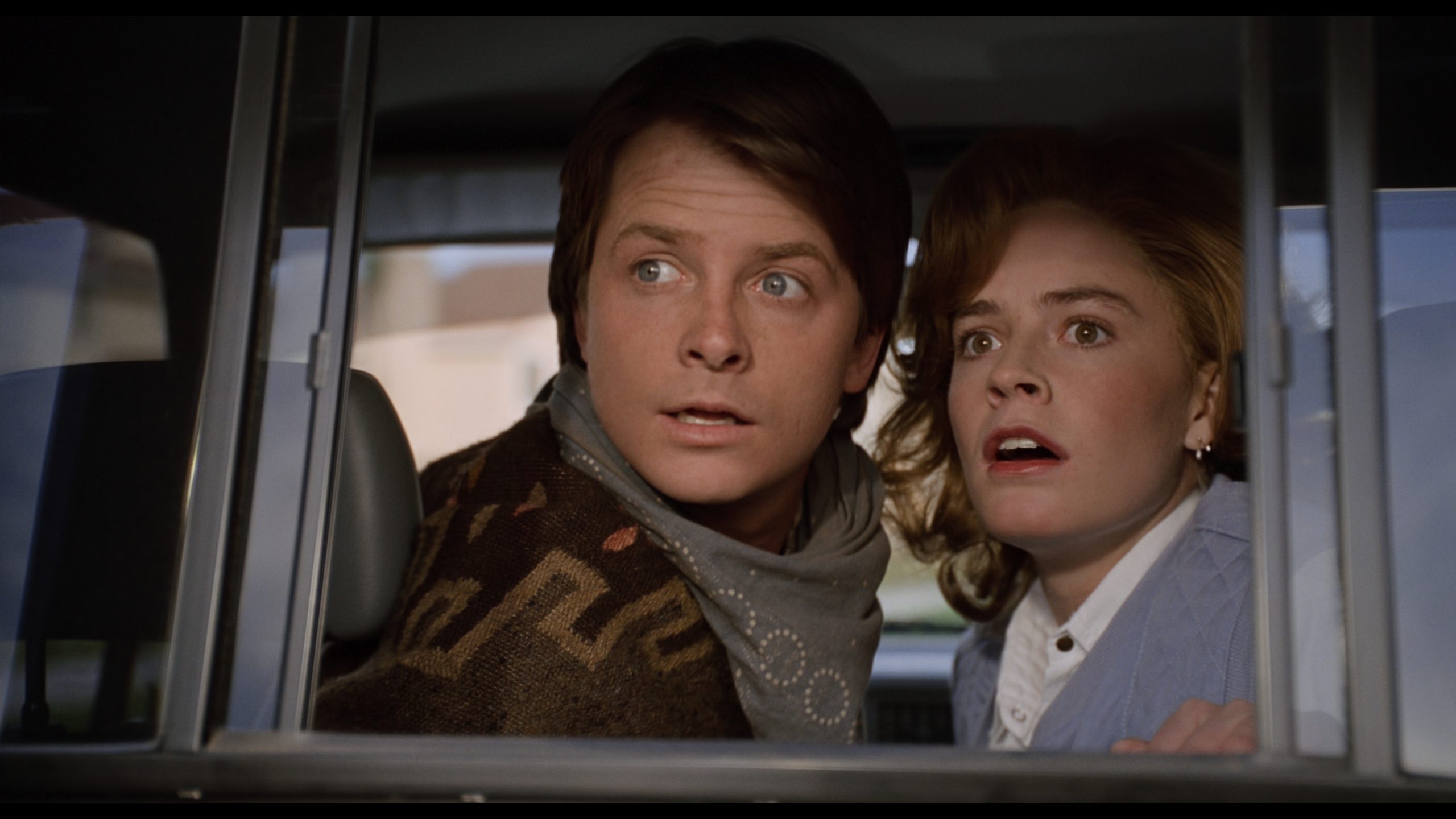 Of the three films, this is Universal’s best work. Imperfect, if satisfying. A warm color grade accentuates the western setting, made more natural via deep color tech. Primaries survive, and things like McFly’s pink shirt succeed in breaking from the orange aesthetic. Flesh tones still look pure too, and when away from the western setting, natural flourishes avoid any modern tinkering.

Only the slightest filtering remains, causing mild consternation at times. The undertaker offering McFly a suit begs caution given its unusual smoothness. Occasionally, detail does appear eroded, even when grain sticks around. Minor mosquito noise draws ire too, if minor. Pick up on some slight ringing on contrasting edges too, if you’re the perfectionist type. It’s there if you know what to look for (watch as the train first pulls up to the station as Steenburgen waits).

Misgivings as they are, they don’t diminish a sharp transfer, bringing out the full 4K potential. Back to the Future Part III is the only one of the three looking like a true 4K master, resolving excellent details, inconsistencies aside. Facial texture stands out, flawlessly resolved at peak moments. Cinematography creates challenges like thick tree lines, equally defined in wide shots.

Sunlit settings appease HDR buffs, adding an organic glow to the imagery. That contrast helps when scenes feature only flame lit actors, allowing their faces to better escape the precision black levels. Great depth is a rare constant in this transfer, and something to count on throughout.

Saving the best LFE for its finale, the steam engine creates steady low-end power. Its eventual demise is better still, stretching range to create needed scale for a miniature set. Earlier, jolts through time and stampeding horses add their own trust, along with the bold, widely staged score.

Two commentaries (and to note, extras appear on both the UHD and Blu-ray), the Q&A with producers Bob Gale and Robert Zemeckis up first. The second is your general commentary, given by Gale and Neil Canton. A single deleted scenes is here, again with a Bob Gale commentary.

Behind-the-scenes includes a look at the western Hill Valley, outtakes, and the design around the marketing campaign. A section on the Universal theme park ride takes you through the attraction. A music video and trailers are left.

Back to the Future Part III

Giving Doc Brown a full personality, Back to the Future Part III is his movie, and sends the series out in capable hands.