Biff Tannen isn’t often right in any of the three Back to the Future movies, but he’s crisply accurate when stating, “There’s something very familiar about all of this” in Back to the Future Part II. From a script that is in no way chicken, the intertwining aspects as the story jumps between three time periods – without any loss of clarity – celebrates almost faultless continuity. And, what happens to a world when bullies win.

It’s reasonable to see Back to the Future Part II as the future of Marty McFly’s (Michael J. Fox) creation. He did, obviously, creating a butterfly effect by leaving behind a Sports Almanac. The sequel isn’t so simple though. Back to the Future ended with McFly’s father a rich, yuppie author, dominating Tannen (Thomas F. Wilson). Fast-forward 20 years in that timeline, and maybe the elder McFly is just as controlling and abusive in his power trip. All the riches and trucks don’t seem as grand when viewed from the bottom.

Rarely do movies need sequels; Back to the Future Part II feels required

Back to the Future Part II has fun in its future 2015. Hoverboards, self-lacing shoes, flying cars, inflating jackets – all future-y cool. There’s another Jaws sequel too, but Universal whiffed on that in reality. That stuff, the pop culture-fueled world as envisioned by Hollywood, happens under a society battered by wealth inequality and hyper-inflation. Seeing Tannen as a mythical public figure, living a glossy tower, and successful only because of chance undoubtedly patterns itself after one specific real world figure. McFly can at any time revert back to his own, dream-like 1985, but instead races to restore his middle class existence. At least then, the world is spared Tannen’s rule. McFly isn’t in this for self alone, and that’s why he cements his hero status.

Rarely do movies need sequels; Back to the Future Part II feels required. Without it, Back to the Future is left with uncertainty. McFly matured, if leaving questions as to whether he did so enough. While the interlocked stories deal in wonderfully imaginative setpieces in which characters dodge their alternate selves (splendid in visual effects too), the entertainment doesn’t lose McFly’s identity. It’s a natural maturation and evolution, taking A Christmas Carol’s ethos, ignoring the holiday, and molding the whole thing into a smart, observant sci-fi tale. The end result is the same – McFly must ignore self to help others, and although riches await, it’s just too cruel a future to others. 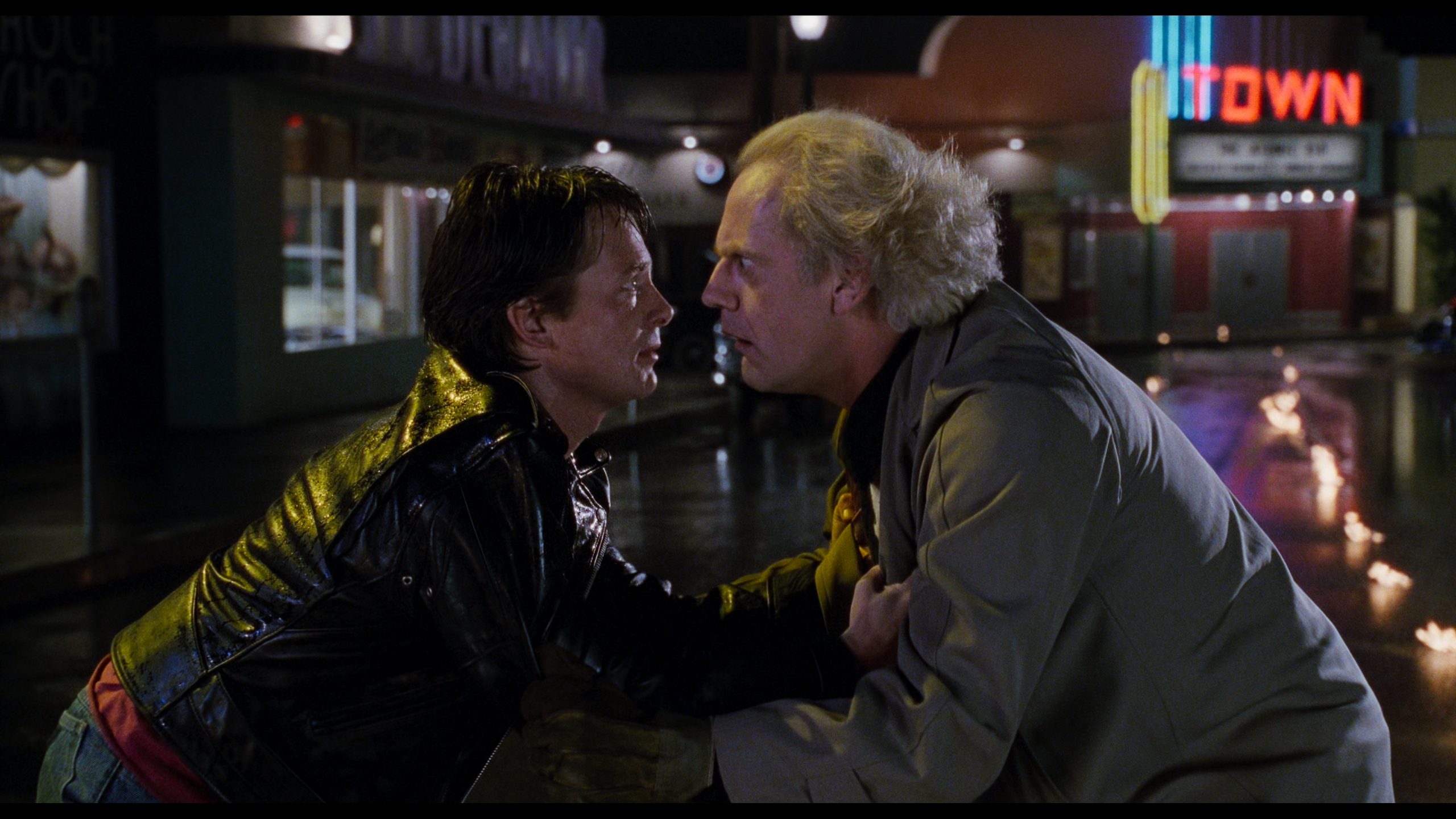 The good news: This is an improvement over Back to the Future. Back to the Future Part II shows sharper resolution, crisper detail, and more natural textures. At times, this new master absolutely looks its best, even glamorous. Added gloss from a Dolby Vision pass helps bring out depth, the contrast spunky as needed to bolster the lights adorning Tannen’s monolithic tower.

But – yes, there’s another but in this set – questions linger. This isn’t concerning the visual effects and composites. Those suffer typical degradation from the era, and given their smoothness, stick out from the rest; it’s easy to tell when effects draw near.

While grain resolves, filtering shows. Not significant enough to damage the overall look, rather earn some side eye as grain unnaturally floats around actors. There’s a bizarre moment when McFly enters the vintage ‘80s shop. Watch the background, along the edges of the steps and frames, where it seems like the restoration is covering up print damage, but doing so by smearing parts of the image. That’s not the only instance, if the most notable/visible.

Back to the Future Part II is a tough one, because it’s a pleasing transfer only when up against the first movie’s. Compared to other UHD’s mastered from the same decade (even Universal’s own, like E.T.), Universal’s wildly inconsistent effort deserves ire. Fair, but never great. Textured, but not always.

As a more active film, Atmos benefits this sequel, making sure to acknowledge the height channels by sending flying cars and hoverboards overhead as they pass. Said audio then keeps going through to the rears, landing where needed to make full use of the expanded surround soundstage. Pleasingly split stereos handle plenty too, certainly emboldening the memorable score, even as the sound effects strain a little in their age (especially gunshots).

Decent low-end brings its touch during time warps, accentuating music too. Homecoming brings a kick to the concert. There’s a stable hum from car engines, nothing aggressive, if noticeable.

Extras mimic the Back to the Future disc (and both the UHD and Blu-ray share the content). There are still two commentaries here, a Q&A with producers Bob Gale and Neil Canton up first. The second is your general commentary, given by Gale and director Robert Zemeckis. Deleted scenes after that, this time seven of them with a Bob Gale commentary, running 5:45 total.

Tales from the Future returns, this time with the subtitle Time Flies. This 28-minute piece covers the inception of the sequel, and the casting issues. The Physics of BTTF is actually a great look at time travel’s potential and the plausibility. An archive section contains a vintage making-of, and the second part of Making the Trilogy.

A behind-the-scenes section has eight selections, some of them on the various types of special effects like the hoverboard and DeLorean, followed by production design insight, outtakes, and photo gallery.

Back to the Future Part II

Back to the Future Part II doesn’t avoid a challenge in either storytelling or visual effects, and makes sure to evolve Marty McFly’s character.