There’s an occasional Twitter trend, asking people to explain their favorite film plot badly. For Back to the Future, “Man goes back in time, creates plan to molest his future mother,” isn’t wrong. In part – a crucial part – that’s Back to the Future.

Comedic awkwardness aside as Marty McFly attempts to pair (re-pair?) up his parents, it’s worth noting the subtle genius behind this movie. Writing Back to the Future off as a mainstream, big budget, Hollywood setpiece ignores the script’s ingenuity. In under twenty minutes, time travel becomes reality, and in that first act, Back to the Future foreshadowed the tiniest events to come. The camera pans a room of clocks behind the credits, a man’s picture stuck to one of the hands, seemingly a clever reference to silent star Harold Lloyd. But no. That’s Doc Brown, bringing humor from the past life he hasn’t lived yet.

In its final brilliant flash, Back to the Future turns into a coming of age story

McFly’s a good kid, ultimately. He’s in this to save Doc Brown from assassination, not only make sure his parents hook up. They do, of course, otherwise there’s no Marty. When returning to his own time, nothing is the same however. His dad turned into a bully. Their house looks gaudy and fancy. In the garage, Marty has the truck he so wanted. His girl’s still hanging around too. It’s clear he’s not happy; it’s all uncomfortable. That’s not who he is.

Much as Marty hates seeing his dad bullied, George’s (Crispin Glover) social clumsiness is part of life. In its final brilliant flash, Back to the Future turns into a coming of age story – and in movie time, it all happens overnight. Maturity makes it obvious that you don’t need money and you don’t need fame. 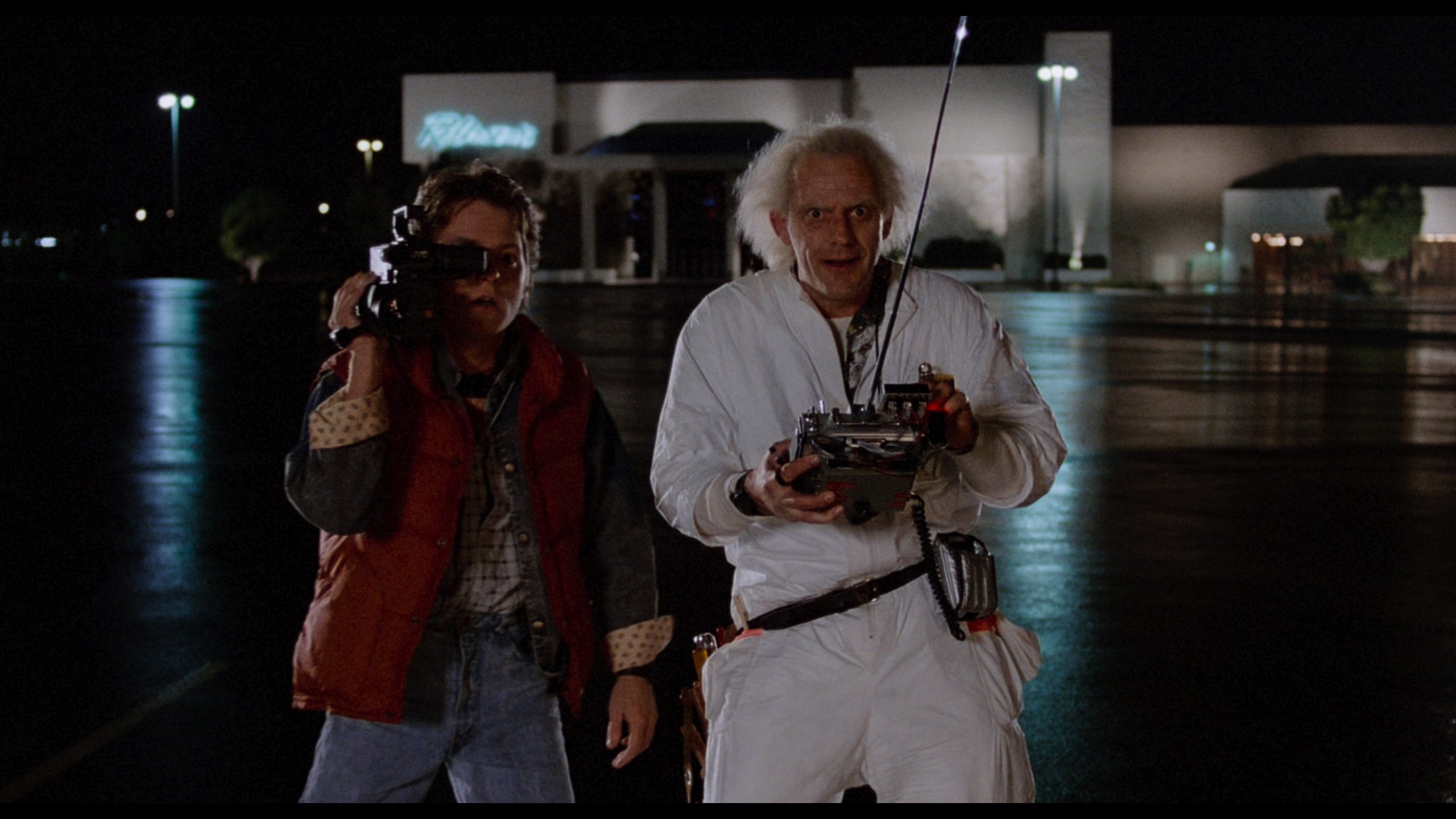 Universal’s Blu-ray release disappointed. Or, to be blunt, the HD disc was awful. On those low standards, improvement seems inevitable. The Dolby Vision pass alone helps. Better depth gives life to black levels and shadow detail where previous transfers failed. Seeing the lit signs around the mall, neons too, adds a needed brightness, stretching nits. Same goes for lightning and flames. This isn’t only richer, but impressively accurate to passing by a mall at night against a perfectly black sky.

After that, it’s all a mess.

Universal can claim Back to the Future received a new 4K scan. Maybe it did. That’s not what they transferred though. Or, maybe the digital tools leaving ringing and smearing residue sap any resolution gained in that that process. At times, Back to the Future is downright ugly, an unfortunate mess at a time when studios like Sony pour so much into accurately preserving their catalog on UHD.

The pervasive murkiness isn’t caused by being an older film print or difficult source. Spy Predator, which excels despite hefty challenges. Back to the Future lacks the same refinement, diluting definition in the process, and gaining little even over the pitiful HD discs.

Watch as Marty and Lorraine sit in the car before homecoming, the screen swarming with what looks like VHS-era artifacts. It’s as if someone went into a video editor and added that specific filtering effect. Elsewhere, hardened edges on contrasting elements cause further alarm. Wide shots fail to keep image integrity, whether panning the town’s main roads or at dinner tables. There’s even a shot looking up at the clock tower, Marty in the foreground, where aliasing is obvious on the tower’s architecture.

Studios have done so well with their catalog on UHD so far. Bummer this is one to ruin that streak.

At least the refreshed sound mix offers a positive note. While sparingly using the height channels (a helicopter flying by, some thunder), additional rears play nicely. Chases scenes pan around the soundstage. Bullets whip past, their stock studio fidelity a little more obvious than some will like, if totally precise in their location. Ticking clocks, homecoming ambiance, and wind pass through as if always part of Back to the Future’s audio.

Huey Lewis tracks never sounded better in a movie than they do here, helped by satisfying range, allowing the low-end needed space. When the Delorean bursts through time, it’s accompanied by a fantastic jolt. Nothing about the LFE feels artificial.

The UHD and Blu-ray share these bonuses (and the Blu-ray includes the new master). It’s the same bonuses as before, although there is an additional bonus disc containing new material, separate from the rest.

There are two commentary tracks, a Q&A with producers Bob Gale and director Robert Zemeckis up first. The second is a general commentary, given by Gale and Neil Canton.

These are followed up by some deleted scenes, eight in all, that run nearly 11-minutes. Tales from the Future is a making-of that will carry over onto all three discs, the first sub-section per se called In the Beginning detailing how the film came about, the second Time to Go moving into production, the third Keeping Time focused on the music.

A section of archival featurettes all begins with an ’80s making-of, followed by the first part of another three-disc documentary, Making the Trilogy. Back to the Future Night revisits the TV premiere, hosted by Leslie Nielsen on NBC.

An interview with Michael J. Fox is the next option in the menu, a 10-minute sit-down chat. A section on behind-the-scenes covers outtakes, make-up tests, and a deleted concept for a nuclear site sequence with a commentary. A music video and trailer check needed boxes at the end.

Back to the Future

Taking an awkward concept and turning into an example of screenwriting fluency, Back to the Future wastes nothing in achieving pop culture perfection.