Tremors works because of defined rules, that subterranean worms detect any and all surface vibration. Shrieker Island likes to bend that logic, degrading some of its tension. There is an out maybe – for this seventh sequel, the Graboids comes from a genetically mutated strain. The monsters make their own rules now.

Wildly uneven as the Tremors series is, aside from less refined humor and those lore inconsistencies, Shrieker Island lands near the top of this franchise. Thailand location shooting gives this entry a visual splendor and always evolving creatures reach newfound scale, enough to swallow an 11,000 pound elephant.

This is Burt Gummer’s series. Michael Gross and Tremors remain one with each other, inseparable. Where Gummer often stood as a sort of second amendment-preaching, survivalist anti-hero – slightly screwy too – Shrieker Island gives him someone loonier to play against, and for the audience to hate. It’s easy villainy when drawing up arrogant, trophy hunting, Silicon Valley elites, using their riches to alter Graboids, and make their head-on-a-wall souvenirs sparkle more. Better, Gummer doesn’t even have a gun on this isolated island. Rather, his instincts and a flamethrower… which is sort of a gun.

Sustained energy helps this entry thrive, constant in its monster strikes, even if the budget limits their screen exposure. A sizable cast, barely even named before being eaten, meet their fates regularly. Spoiled rich kids don’t need characters because eating the rich is something movies often strive for. Shrieker Island offs at least six of them.

Missing from this follow-up is Jamie Kennedy, previously starring as Gummer’s son, written out as being imprisoned for selling drugs. That’s fine. Expanding Gummer’s history is an ex, Jas (Caroline Langrishe), humanizing an archetypal persona given no room to truly breathe outside of his paranoid bubble. It takes seven movies, expanding from bit player to face-of-the-franchise, but Shrieker Island draws Gummer as a genuine person rather than nutty caricature. He even listens rather than demanding control. Age softened him, and for Tremors, that’s a best case scenario.

No, Shrieker Island doesn’t return to the greatness discovered by Kevin Bacon and Fred Ward in the original. Jon Heder, taking the sidekick role, lacks that spark when sharing the screen. Short of re-teaming Bacon/Ward, Tremors can subsist on lesser duos; Shrieker Island proves as much. 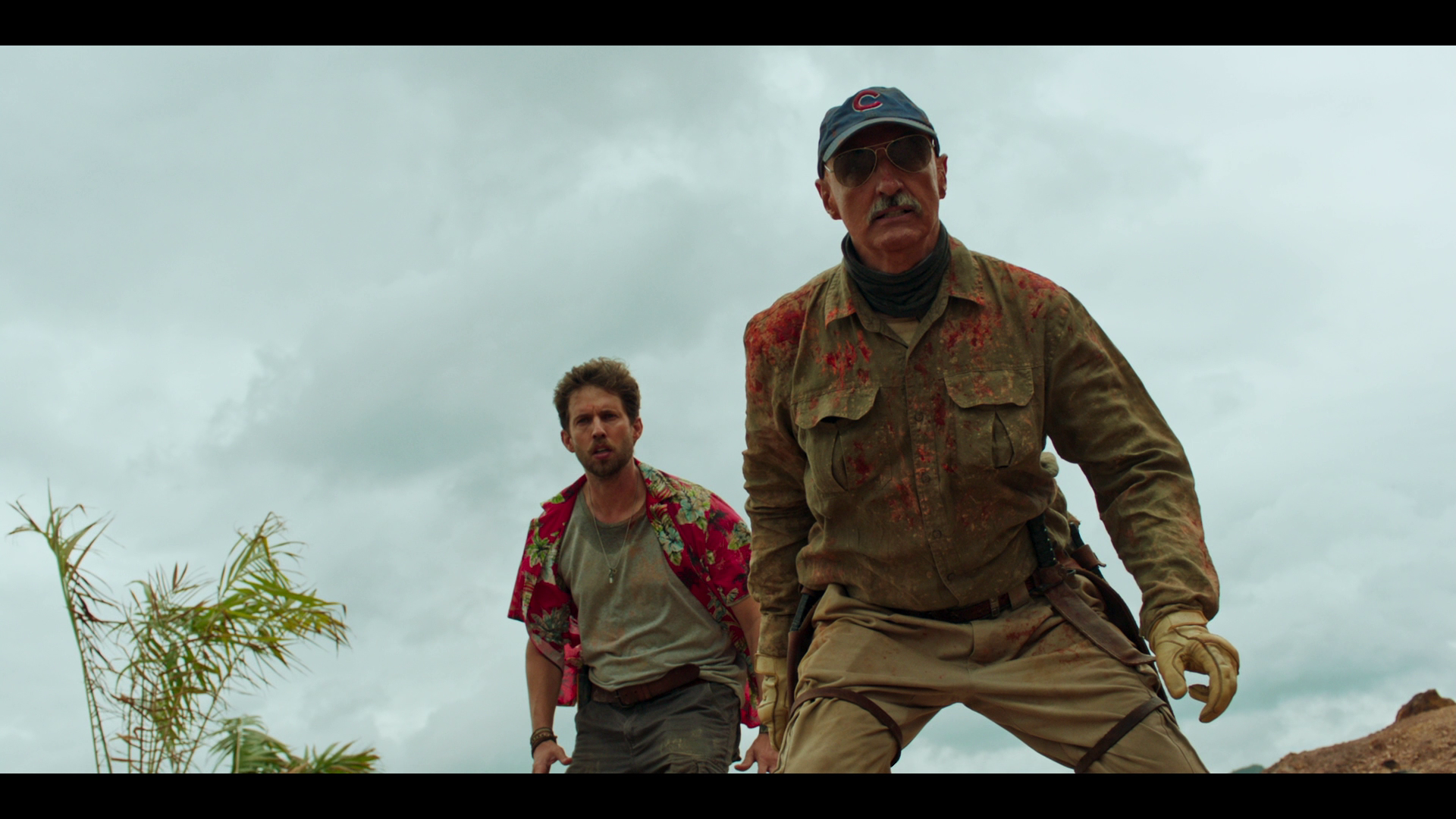 Where sunlight might provide energy, the tint takes it back. Most of Shrieker Island falls to this aggressive push, and that’s a shame. Scenes elsewhere veer toward warmth, nearly oversaturated thanks to the bright primaries.

Two puff pieces come first, an expanded FAQ (of sorts) detailing the Graboid species, and a top 30 Tremors moments that runs eight minutes. The good stuff resides in The Legend of Burt Gummer, bringing in Michael Gross (obviously) to discuss his character’s history, then speaking to Kevin Bacon and others about working alongside him. It’s a great celebration for 13-minutes.

The 15 unaltered images below represent the Blu-ray. For an additional 35 Tremors: Shriker Island screenshots, early access to all screens (plus the 120,000+ already in our library), 120 exclusive 4K UHD reviews, and more, subscribe on Patreon.