Peter Sellers plays one of the most likable, charming, huggable characters in Mr. Topaze. He’s a lonely, honest English teacher, dedicated to his students, flirting with his co-worker who happens to be the daughter of the school’s principal. This man must succeed by the end, and he does. It’s actually mournfully depressing.

In his classroom, Topaze (Sellers) decorates not with alphabet or number charts. On the back wall, there’s a warning about alcohol consumption even though he teaches middle school – this man wants his kids safe. Near the door, a simple poster stating, “Money is the trial of friendship.” Around the blackboard, more warnings about greed, cash, and selfishness. It’s clear Topaze needs nothing else to be content in his life, and makes peace lecturing in a pitiful, rundown classroom.

It’s not so much Mr. Topaze is flawed, rather truthful. That hurts

Mr. Topaze isn’t about happiness though. It’s freely about money. Everyone around him worries about it. The principal looks to take advantage of potentially rich parents, willing to accept their bribes to change grades. Suzy (Nadia Gray) looks down on Topaze because he’s financially pinched; she’s clearly in love, but non-committal.

Sellers directed, but never did so again (in any credited capacity), and the film fell into obscurity. It doesn’t seem like one, but Mr. Topaze is a genuine tragedy, and the film’s languishing status appears almost remorseful in retrospect. Here’s Sellers, so genuine and sweet, quickly turning into a villain. Topaze deserves to win. In a social aspect, he does – by the end, Topaze is rich. To get there, he ignored his own beliefs and morals. He no longer cares for others. The system won, not Topaze.

Luck and opportunity found Topaze, not the hard work he once espoused. Mr. Topaze ends on misery. It’s difficult to accept, disorienting even, in approaching the material through a defeatist lens. Repurposed from a Marcel Pagnol play written near Britian’s Great Depression era, that feeling comes through. Everything goes wrong because men like Mr. Topaze no longer succeed in society. Respect is lost, replaced by fear of the ruling class who step over others on their way. That’s what Topaze becomes, fired from his teaching position, roped into a criminal enterprise, and becoming a hypocrite instead of fighting.

It’s not so much Mr. Topaze is flawed, rather truthful. That hurts. Nice guys finish last, until they stop being nice. A cruel realization, especially when placed on someone as affable as Sellers. 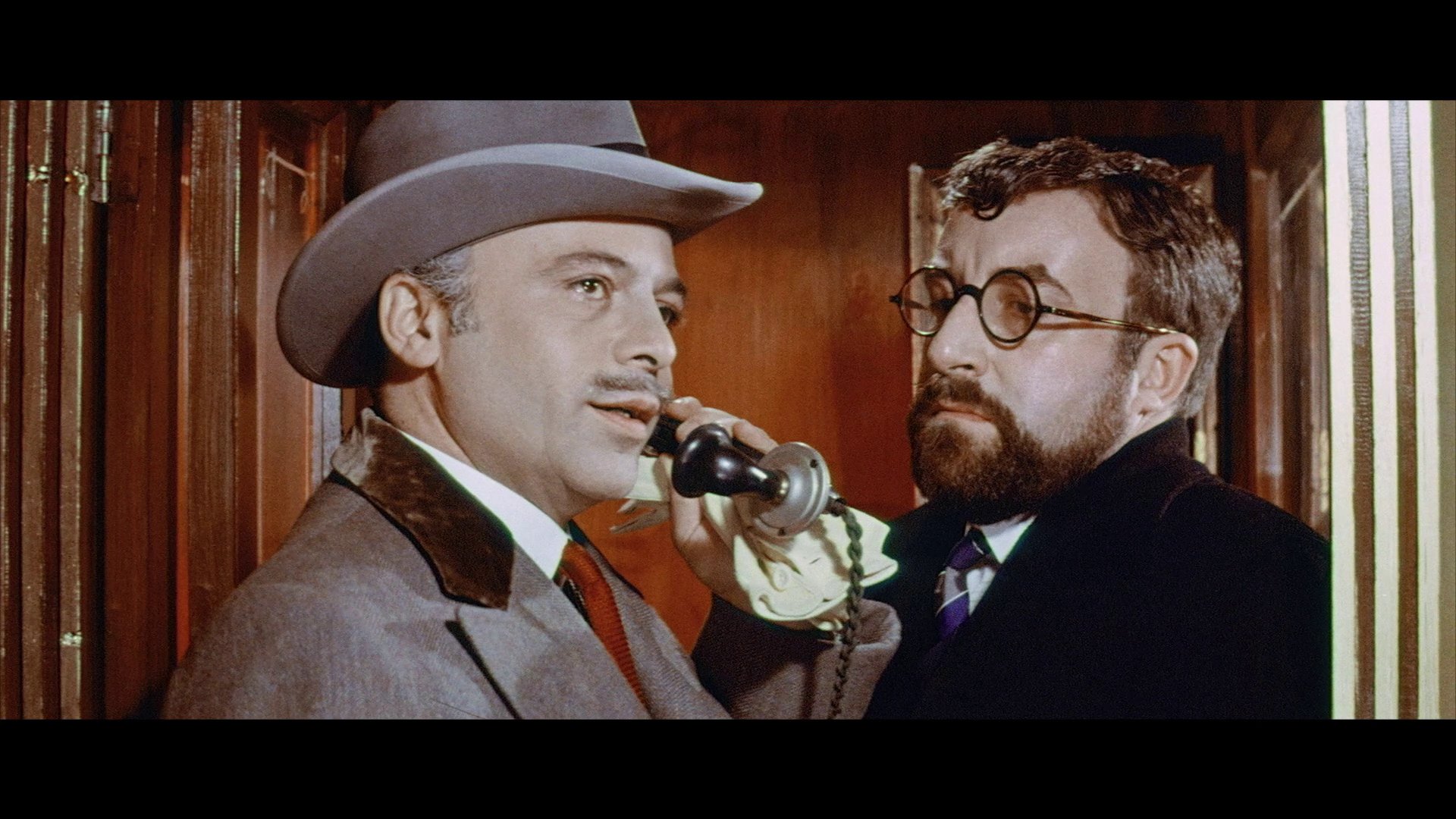 The BFI holds one of the few precious Mr. Topaze prints in existence, and their preservation is the Blu-ray’s source material. Given the theatrical print’s age and condition, a 2K scan represents the best possible scenario. Unfortunately, it’s rough going. Scratches and dirt (in varying degrees of severity) hamper things. Few frames go undamaged.

Pleasing grain doesn’t struggle to resolve. Film Movement’s encode works. That allows remaining detail to stand out, although being a multi-generational film stock, it’s weary. Limited sharpness and texture bring a halt to the finest details. Resolution maintains consistency at a moderate level, worthy of HD, but skirting as much.

In its greatest loss, the Cinemascope production tragically loses much of its vibrancy. Color faded, losing certain pigments, draining saturation. For comparison, think of a colorized B&W movie, where primaries flatten to pasty pastels. A magenta push is noted in the restoration notes and that’s evident. It equally saps contrast and black levels too.

Hefty static and popping drain this limited PCM track. While a few lows in the score present surprising smoothness, highs wane in their clarity. Like the video, damage causes problems, including skipping.

Actor Leo McKern’s daughters speaks about her father for 20-minutes in a newly recorded interview. The always excellent Kat Ellinger discuses playwright Marcel Pagnol via an essay. A 1951 Sellers short Let’s Go Crazy precedes trailers. Inside the case, a booklet with fine essays on the film and Sellers in general.

Peter Sellers introduces a lovable, charming character in Mr. Topaze, then turns his story into a tragedy about success.

The 15 unaltered images below represent the Blu-ray. For an additional 21 Mr. Topaze screenshots, early access to all screens (plus the 120,000+ already in our library), 120 exclusive 4K UHD reviews, and more, subscribe on Patreon.