There’s no reinvention of Friday the 13th’s formula in this reboot/remake/reset. The script acknowledges as much. Aaron Yoo openly asks his cabin mates to, “be one big happy cliché.” Check the boxes, including the jerk boyfriend, the empathetic girlfriend, sex crazed cheater, topless water skier, stoner, and hyper active drunks.

Even if this is a reset, the area around Camp Crystal Lake feels more like an evolution. There’s almost nothing left of its original Normal Rockwell-esque aesthetic. Those remaining – stock movie hicks – live in dire poverty and fear. They know Jason Vorhees is around. They accept him. In a way, he’s one of them.

Without reasonably interesting heroes, Friday the 13th focuses on Vorhees

Without reasonably interesting heroes, Friday the 13th focuses on Vorhees. That’s smart, giving him legitimacy, creating a genuine character from a voiceless murderer. Rather than a vengeful, undead adult child, Vorhees locks into a post-9/11 anxiety that gave birth to survivalist culture. He doesn’t need a gun, but defends his territory, living underground like a territorial animal. Vorhees kills because from a young age, paranoia simmered within him. Without a parent to guide him, Vorhees succumbed to isolation. Terrorism to him is anyone invading land he claimed as his own.

Yes, Friday the 13th is still a splatter movie. Heads literally roll. Chests are stabbed, eyeballs gouged. Exploitative nudity doesn’t even try to limit its exposure, rather gratuitously celebrates the opportunity, even during a kill.

Unlike many other Friday the 13th entries, this isn’t pointless. Where the ‘80s films broadly instituted scare tactics over teen sex and Reagan-era drug wars – a killer is out there for anyone violating those rules – society became more liberal through the decades. Pot’s prohibition is treated more like a joke, and sex so normalized, even network TV stretched censorship rules. Those who cling to fervent conservatism don’t live in a small town, but the sticks, surrounded by nothing, and appreciating the separation.

As a movie, it’s too long, the personalities thin, and the tension repetitive. But where the classic slashers embedded into drugs, sex, and rock and roll culture, the Friday the 13th of 2009 no longer has those social fears. Instead, Vorhees becomes an undeniable, plausibly real world villain after building him as a cinematic, pop culture personality worth cheering for. That’s smart, and it’s a shame this didn’t become the basis for something more. 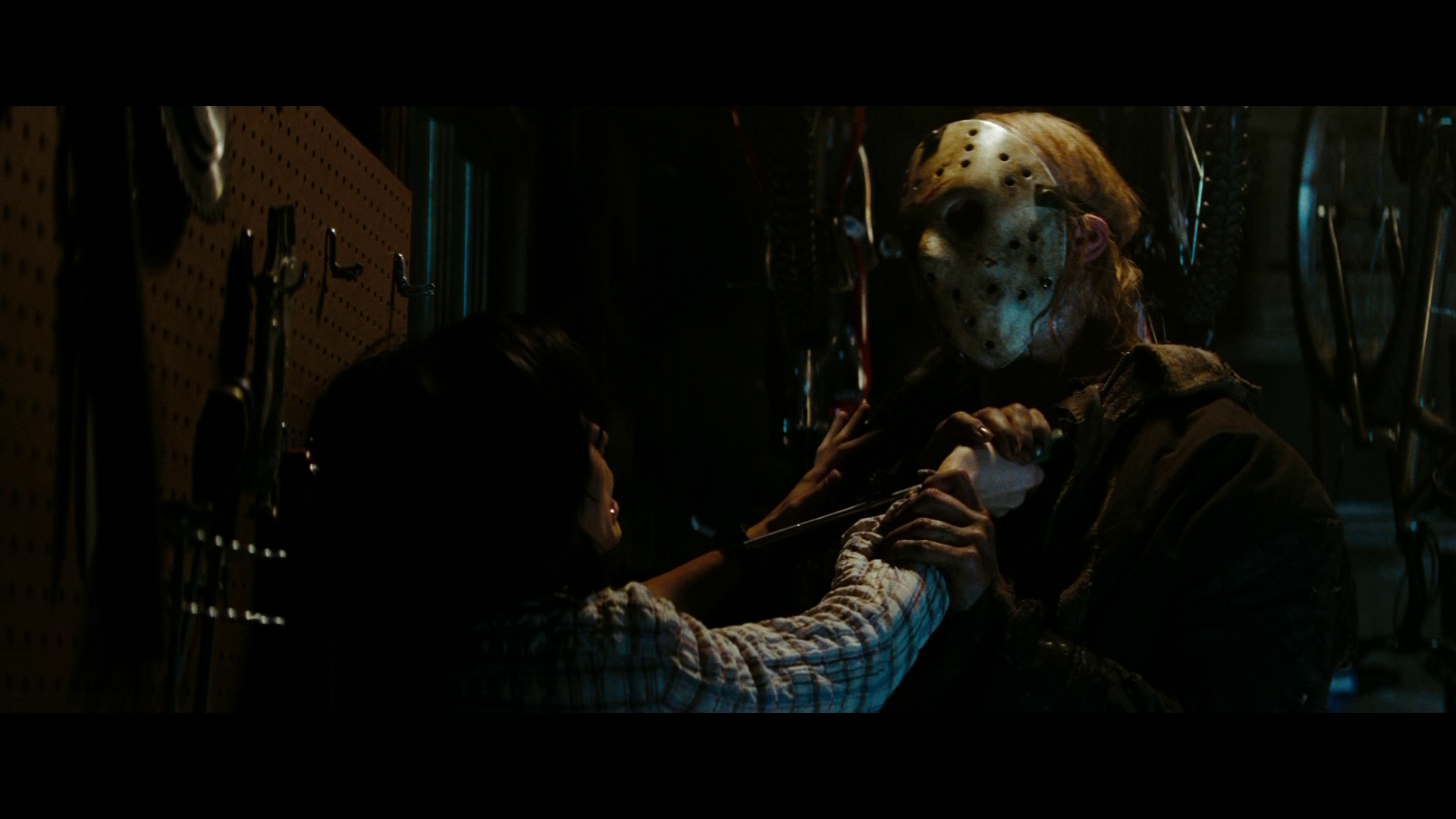 Cloaked in thick shadows, black levels do have the tendency to crush. Some of that falls back on the disc and limited range (this movie begging for HDR), although it’s tolerable. Image depth works, always intact and deep. Brilliant contrast helps, letting in enough light to glaze the scenery, giving Friday the 13th a studio gloss.

Perky surround use riles up the scares, precisely placing brushed leaves and snapped branches in the rears. Excellent ambiance when underground spreads echoes wide. Rain and thunder find expert placement, filling the soundstage and even moving as lightning strikes, allowing the boom to flow between front and back channels.

While still a routine slasher in formula, reinventing Friday the 13th’s Jason Vorhees as a plausible survivalist killer works.

The 15 unaltered images below represent the Blu-ray. For an additional 31 Friday the 13th screenshots, early access to all screens (plus the 120,000+ already in our library), 120 exclusive 4K UHD reviews, and more, subscribe on Patreon.