In Space, Everyone Will Hear These Screams

Taking zero lessons from Critters 4, Leprechaun 4, or Hellraiser 4, writers plopped Jason Vorhees into space, but to their credit, at least waited 10 movies to get there.

Moronic as Jason X is, at times, it’s genuinely funny, self-referential, and in on its own absurdity. The tough security lead takes a spike to the ribs, defiant until a second strike to which he replies, “That oughta do it.” Head scientist Professor Lowe (Johnathan Potts) celebrates meeting Vorhees because, “He just wanted his machete back.” Cue an off-screen scream, focused on the surviving cast as they wait for the inevitable.

… utterly devoid of cinematic accomplishment, but if nothing else, Jason X’s creatives clearly know this

In that way, Jason X comes close to the highs of Jason Lives, both films bordering on parody, but neither willing to embrace comedy in total. Given the outrageously memorable murders in Jason X, including a classic frozen face smash and brilliant send-up of a sleeping bag kill from The New Blood, this sequel teeters on absolute greatness. Then, it succumbs to the part four curse that so afflicted those others – trying to convince someone, anyone to take this seriously.

Jason X is the only Friday the 13th to directly correlate actual themes, from catastrophic climate change (Earth is a wasteland in this future), mad science, and ludicrous capitalist endeavors. Vorhees is here to punish those seeking to make these mistakes again, marching on board a vessel, acting like Alien’s Xenomorph, if with less subtlety. Much less, actually.

There’s still sex of course. One lover is split in two by a machete. The victim list is otherwise arrogant or cocky military types, blasting their foe with bullets by the hundreds, an acceptable change in a move away from dopey teens. Then, in another “versus” moment, Vorhees stares down an android (Lisa Ryder), because there’s no reason NOT to do so by the time of Jason X. He fought telekinetic kids and New York’s grittiest era; an intelligent robot seems a logical escalation.

To the extent Jason X entertains, it’s almost a success. The camp value, the hokiness, the asinine concept all collide simultaneously, a film totally, utterly devoid of cinematic accomplishment, but if nothing else, Jason X’s creatives clearly know this. In the bankrupt void of film sequels, space never works if things didn’t start there, but Jason X hints there is a way. 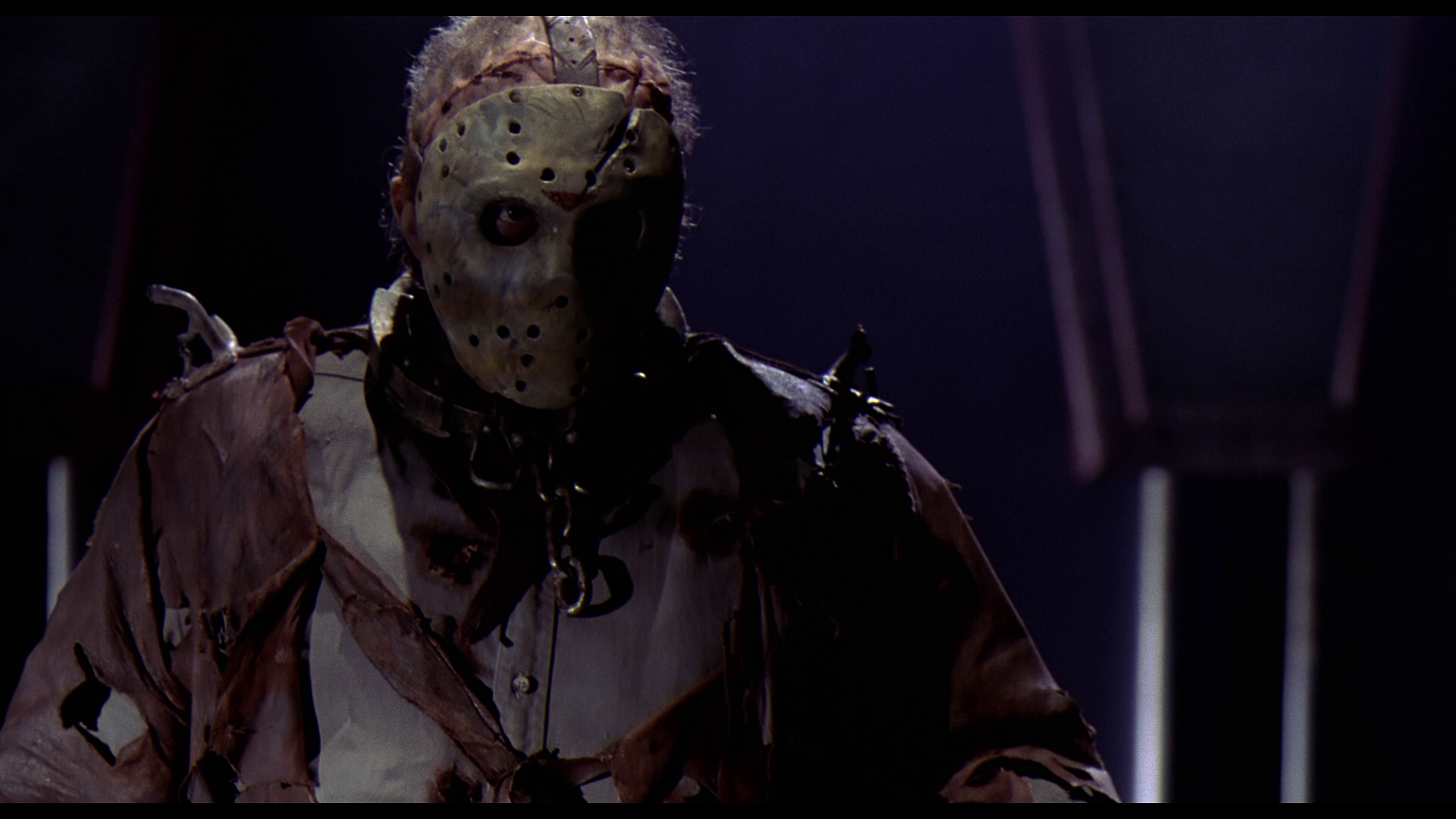 Scream Factory doesn’t note a new scan or transfer, and the result looks out of date. For instance, the grain structure appears fine until motion introduces notable smearing. Low pass filtering is a likely cause, a leftover from Blu-ray’s early days. Fine detail that does escape will do so only when characters remain still.

Then there’s the black crush, also prominent in Scream’s Jason Goes to Hell disc. There’s slightly more leeway here given the stark cinematography, but still, dimension is all but totally lost given the inability to resolve shadows. Some minor, brief clipping impacts whites, marginal compared to the detail-gorging blacks.

Fun discreet channel usage sells the chaos, sending alarms blaring into every speaker, combined with sparks, ricocheting bullets, and a few kills too. Lowe’s death scream comes from the right rear, as it should. Spaceships pan around, transitioning front to back cleanly. It’s a fun effort, a little dated given the power exhibited by current blockbusters, but still worthwhile.

Porting over lengthy New Line extras, this includes almost an hour of raw set footage, some (very) 2000s EPKs, another hour of interviews (as seen in those EPKs), and a look at the full series. Promo materials like trailers and a music video complete this disc in style.

Knowingly stupid, Jason X takes a few opportunities to embrace what it is, but then falls into a rut where it takes this scenario seriously.

The 15 unaltered images below represent the Blu-ray. For an additional 31 Jason X screenshots, early access to all screens (plus the 120,000+ already in our library), 120 exclusive 4K UHD reviews, and more, subscribe on Patreon.