But Not Soon Enough

Creighton Duke knows more about Jason Vorhees than anyone prior in this series. How he learned this is anyone’s guess.

Vorhees isn’t Vorhees, the second time Friday the 13th tried this gimmick after New Beginning. In Jason Goes to Hell’s twist though, this is a body snatcher event, sending the killer’s soul into others who act out his morality policing. Two people refusing to use a condom? That’s cause for death, continuing to cement the genre’s unending punishment for those refusing puritan values. Given how adamant Friday the 13th is/was about picking off what the script’s deem as sexual deviants, it’s surprising to see Vorhees heading to hell. Audiences cheer for the murder; sex is only an inevitable precursor.

Friday the 13th isn’t often a great series. It’s mostly aimless, bumbling, and lost in its own concept. While credit is reserved for at least trying to break free from formula, Jason Goes Hell collapses in on itself, ill-explained, under-developed, and tossing ideas onto a grease covered wall where they can’t stick. Multiple zombie enemies, gruesome vomit demons, a baby, broken relationships, screwy news media anchors, and supernatural whats-its cram this movie with sloppy lore.

For eight entries, no one mentioned Vorhees’ sister. Oops. Given the news coverage and clippings seen in these genre flicks, seems someone might stumble on that information. But no, and conveniently, only she can actually kill her brother, explaining why the shotgun blasts and pyrotechnics never had an effect. Insert a last-minute magic knife to top this mess. Tack on a made-for-TV score too, because at this point, why not?

If there’s any positive takeaway, those happen at the book-ends. The intro brings an FBI sting operation, sending in their blonde female agent to undress as a lure, because nudity is expected, and equally a character flaw in Vorhees’ victims. Stupid, but exciting. Then the famous end, predicting a battle between Vorhees and Freddy Krueger, much as Predator 2 teased a battle against the Xenomorph a few years prior. It’s an early acknowledgment of genre/geek culture, beginning to surface in mainstream crowds. Jason Goes to Hell probably lost more fans than it gained though. 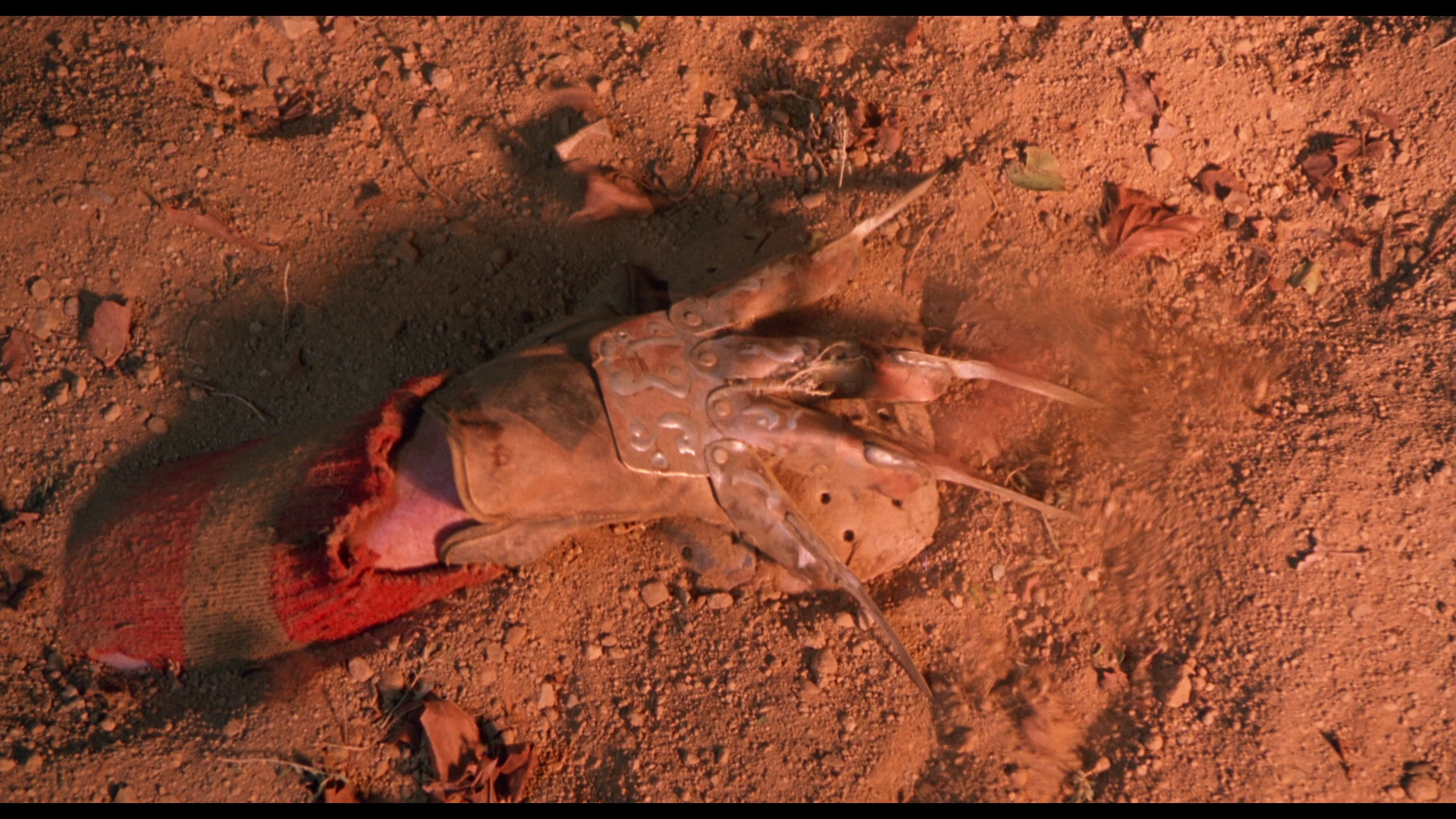 Appreciable in resolution, Scream Factory’s newly struck 2K master adds definite sharpness to the image. Picking up on textural detail is easy, the modern scan bringing detail out crisply. Close-ups excel, precisely defined. The makeup covering Kane Hodder holds up under this scrutiny. Grain resolves without issue, although other problems lead to an occasional downfall.

For instance, color saturation. Flesh tones force reds into the mix, giving them an unnatural glow. When against a campfire, embracing, two of the first victims swarm with noise. That’s not grain, but a fault in color mastering, pushing too far and blowing out primaries. Jason Goes to Hell looks as if it’s set to vivid.

That continues when considering black levels, suffering significant crush. There’s little to no control in shadow detail, choosing instead a hard drop-off, leaving the visuals muddy. Depth doesn’t exist in this transfer. Contrast is fine, but not enough to lift this unfortunate transfer from an ugly fate.

Choose the stereo option over the 5.1. Besides offering minimal surround activity, bass is totally overcranked. Worse, it’s not even tight, but puffy and bloated. It’s a distraction more than an exciting touch. Vorhees steps equal that of Godzilla, but so does every punch, fall, and stabbing.

Either way, dialog comes through a bit worn and a little scratchy. It’s like everyone is speaking through the early days of a cold.

Presenting new bonuses, Scream invites director Adam Marcus into the booth for a commentary, joined by author Peter Bracke. This is in addition to Marcus’ previous commentary, ported from earlier DVD/Blu-rays, with writer Dean Lorey. Marcus then comes back again for a 36-minute interview, an 11-minute one detailing his history with the franchise, and an optional commentary over scenes shot for TV. Kane Hodder then chats for 28-minutes.

Note both the unrated and theatrical cuts are included, each on their own disc. The theatrical version holds the usual trailers, the unrated everything else.

Maybe if he stayed there Jason Goes to Hell might be worthwhile, but instead, it’s a test to see how much junk a fandom can take.

The 15 unaltered images below represent the Blu-ray. For an additional 34 Jason Goes to Hell screenshots, early access to all screens (plus the 120,000+ already in our library), 120 exclusive 4K UHD reviews, and more, subscribe on Patreon.