Freddy vs Jason’s catalyst is generational change. With Jason X as the long outlier, both horror icons slipped into obscurity by the early ’90s. No one feared them in the 2000s because they didn’t know them. Adults buried Freddy and Jason’s existence.

It’s not without precedent. As the genre grew, parental groups tried shielding their kids from the sex, violence, and gore. Rarely did that work, spawning VHS-era heroes to eight-year-olds who slipped a peek at those franchises. When the films disappeared, so did that edge, and without it, gone was a sharp-bladed coming-of-age experience.

Freddy vs Jason is ridiculously aware of the world around it

There’s fandom involved. Freddy vs Jason is a much for ‘80s kids as it is for an age group becoming aware of Hollywood horror; the clash happens because neither franchise wants to acquiesce to the other, one side wearing ugly Christmas sweater colors, the other tattered jackets.

Stuck in endlessly circling development, the eventual release in 2003 came post-9/11, apt then to see parents trying to medicate their kids as to block reality. Fear is wrong and those feelings need sedated, represented in-movie via a psychiatric hospital. While instinct says to protect, fear is necessary, and the young heroes realize confrontation is inevitable.

For something so abrasive, crass, and cruel, Freddy vs Jason is ridiculously aware of the world around it. Rather than relent and follow changing tastes, the asinine, often comical bloodshed unloads pent up anger, not only rejuvenating Krueger, but forcing Vorhees to confront his own past. Eleven films, and Freddy vs Jason is the first to offer any insight into Vorhees’ mind.

Relentlessly paced, the script blitzes through the set-up, making up for any lag via ludicrously scaled murder, the height of which sends Vorhees literally blazing through a cornfield rave. And when decades earlier, Frankenstein Meets the Wolf Man lacked a satisfying brawl, Freddy vs Jason’s preposterously bold third act lets these two bleed by the gallon. It’s a sensational cap for both characters, a needed escalation, creatively fresh, and saluting the slasher’s prime. The brutality, the viciousness represents both movie monsters at their cruelest, and faceless as Vorhees is, the duo seems to enjoy having opposition that doesn’t fall over when struck by bladed hands or a machete.

If slasher movies mirror the worst of human nature and society – and really, what else can a genre based around stabbing nude teens be? – then Freddy vs Jason is their mainstream apex. It’s the point where screen-based serial killers garnered a deep enough fan base to warrant the film in the first place, and the content is such that seeing a naked woman with a slashed throat became so passe, it was necessary to turn the invulnerable title creatures against one another. They have a blast doing it too. 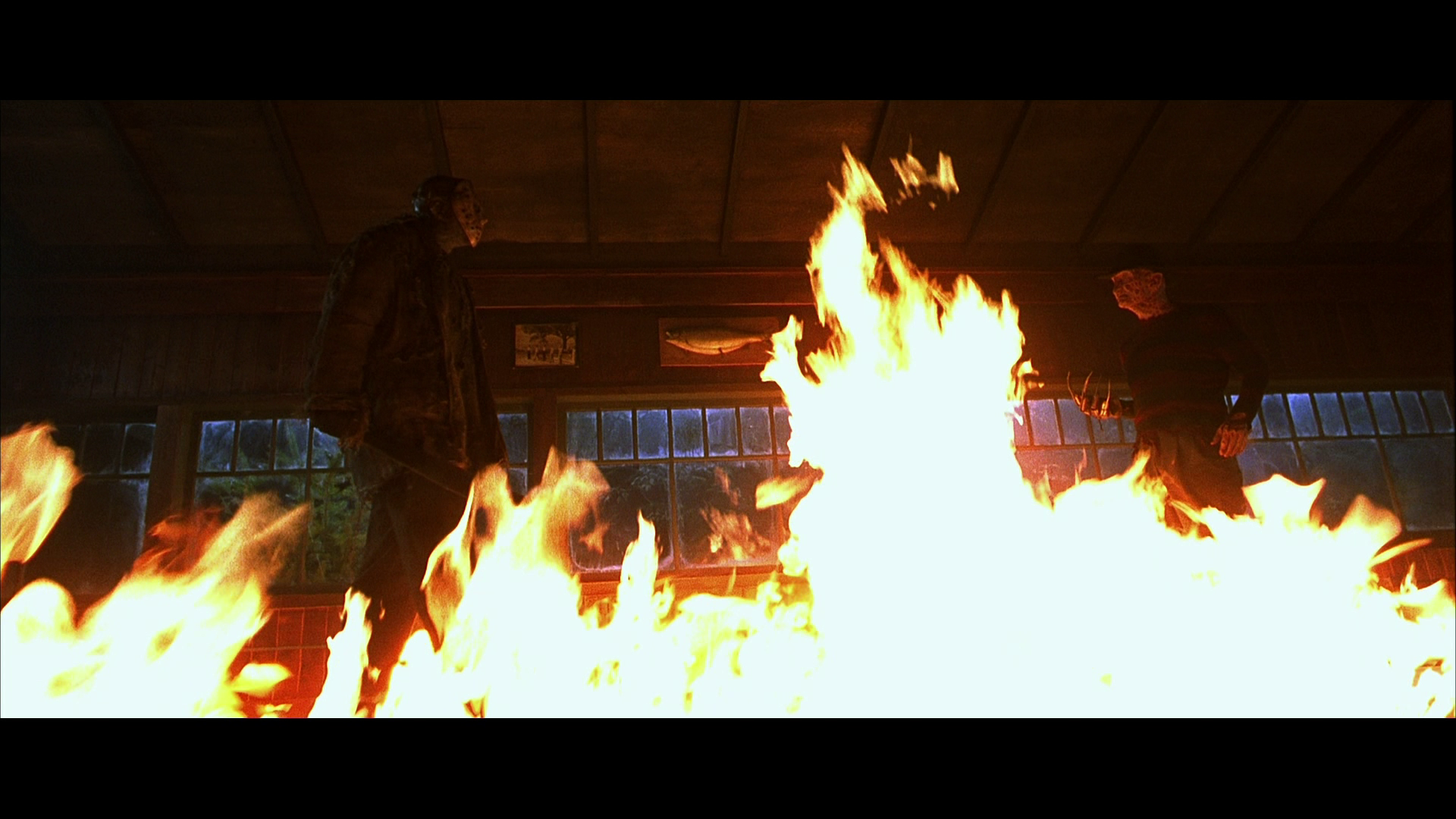 Included in the Scream Factory Friday the 13th box set, this is the exact same disc as issued by Warner/New Line years ago. Freddy vs Jason needs a new master, as this one shows leftover signs from the DVD era. Notably, slight sharpening adds light halos to everything, giving imagery an unnatural, harsh quality. Grain then elevates, challenging the encode, which to its credit, does exceptionally well in the circumstances. The glowing red boiler room asks for trouble, but generally holds up.

Frequent directional scares, brushed aside cornfields, thunderstorms, hissing steam – the TrueHD mix is totally enveloping. Soundstage use never wavers, expertly mixed to capture subtle effects and bolder action. When Vorhees becomes a pinball, stereos split to ping him to the sides. Sending victims through the air, movement follows into each channel as needed.

Couple this with boomy, tight bass for added impact. Low-end depth sells the power of each fighter, accentuating their blows. Fire kicks up a constant rumble, leading to a loud, dynamic explosion at the end. Awesome stuff.

Director Ronny Yu joins his two stars, Robert Englund and Ken Kirzinger, on commentary. They keep chatting over deleted scenes, optionally. Six featurettes show their age, pure early 2000s in their style and heavy promo focus. A dozen visual effects shots are explored over 35-minutes, also offering commentary. Held at an actual summer camp, the film’s premiere is given a paltry few minutes, and a music video trailing at the end.

Freddy vs Jason exploits exploitation, sending the ’80s slasher genre out in a vicious and unrelenting finale.

The 15 unaltered images below represent the Blu-ray. For an additional 36 Freddy vs Jason screenshots, early access to all screens (plus the 120,000+ already in our library), 120 exclusive 4K UHD reviews, and more, subscribe on Patreon.