Rather than introduce a story or deepen Friday the 13th lore, The New Blood opens with what amounts to Jason Vorhees’ acting demo reel, comically suggesting even he knows this slasher business won’t last. Sadly, that in-humor doesn’t last from Jason Lives, instead settling down, resurrecting Vorhees, who’s better at finding gardening equipment in the forest than should be possible.

The finale is wild, staging a chaotic, telekinetic pro wrestling match between Vorhees and abuse victim Tina (Lar Park-Lincoln). The New Blood at least ends with something memorable, giving the killer a capable foe, and for a series already into lightning-resurrected zombies, telekinesis doesn’t strain any logic.

The New Blood at least ends with something memorable

Between those cinematic endcaps, The New Blood lets things be. Requisite nudity, sex, and drugs. Teens being teens. A record number of false scare twig snaps. Murders en masse. Yes, The New Blood brings in a fresh opponent and idea, but other than listlessly leading toward a showdown, it’s clear the ideas were left chained with Jason at the lake’s bottom.

It’s not an unfair criticism. As with other movies in this series, concepts brings up intriguing potential, either to deepen the Vorhees story or explore thematic angles. The latter falls into The New Blood’s lap, Tina a likely catalyst to examine trauma after Tommy Jarvis’ run as a franchise hero. Tina’s alcoholic, abusive father met his fate at Tina’s own hand, something she carries with her into adulthood. Rather than directly correlate the material, Tina spends the movie put down by kids next door, or wanders around in a panic as her doctor treats her like an experiment. She buries her rage, rarely losing control. Sadly, the script lacks nuance or depth to render Tina an interesting character.

Instead, Tina exists because having Vorhees slammed into things, hacked up, or thrown through windows by heroes and heroines became passe. Now, he’s punctured by nails and set ablaze. A bigger budget leads to electrocutions, dangerous stunts, an explosion, and more lavish setpieces. Plus, Kane Hodder, taking the Vorhees role for the first time, gives the undead maniac a fearsome, aggressive posture. Of the mainstream slasher villains, Vorhees’ needed such an actor to finally achieve defining personality, because the scripts themselves never did. His silent voice comes through Hodder’s touch, the way he snaps up a machete, how carelessly he waves a power tool, how ferociously he chokes and throws those in his way. There’s a masculine strength to Vorhees with Hodder’s control, but that’s still not much for a movie. 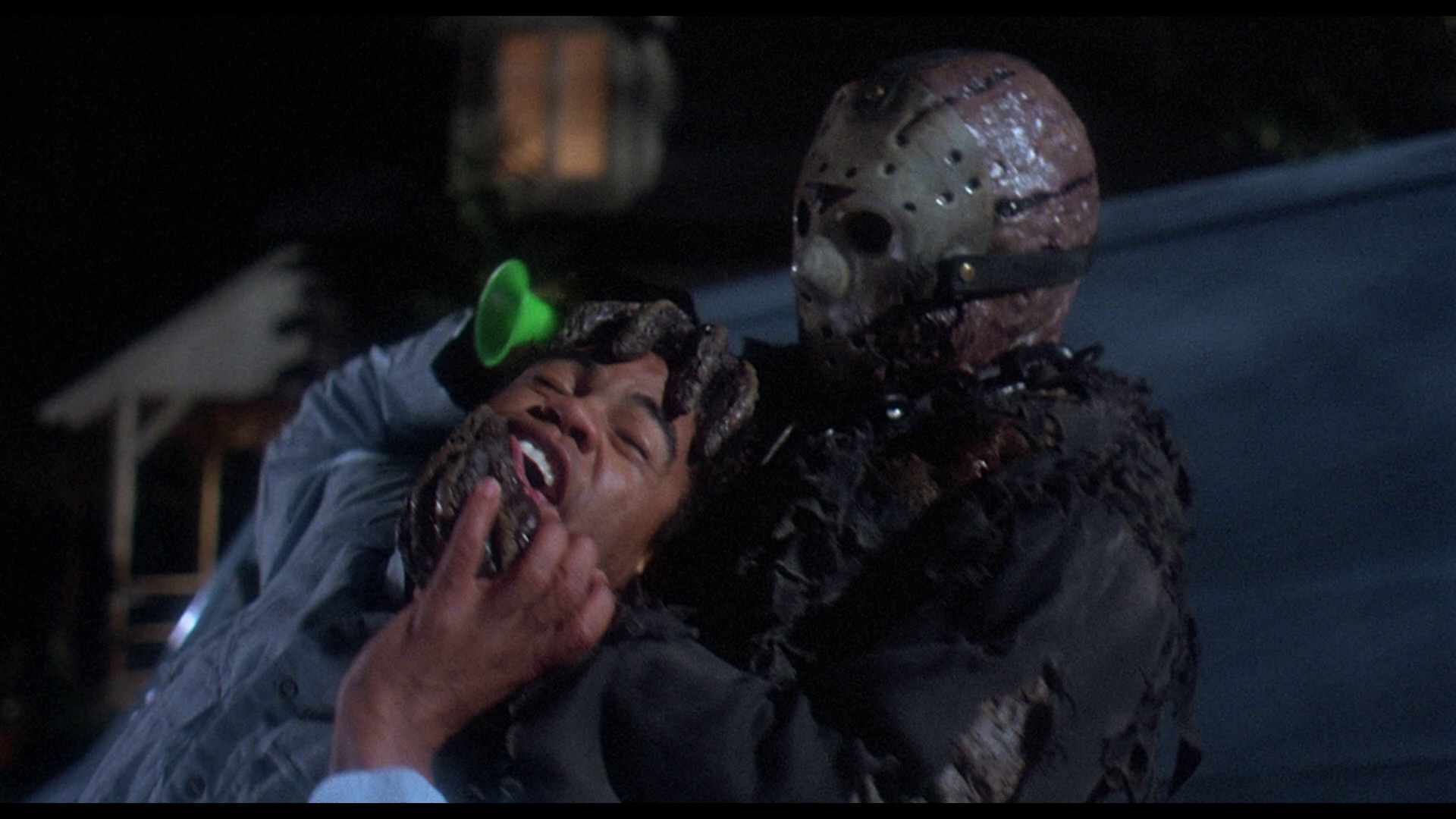 Listless video begins with moderate color saturation, unimpressive and indicative of an older master. Scream licenses Paramount’s work, certainly older given the mundane appearance. Primaries flatten out, weakened by age, and the transfer process does them no favors.

Contrast serves the winning point – the only one though. Early daylight brings perkiness to the imagery, then assisted by spectacular black levels to set the appropriate mood as the killing begins. Shadow density spares detail, rarely falling to crush, and still achieving pure black.

Rudimentary resolution looks akin to a scan completed for the HD cable era, and while thankfully without processing, the end result still lacks definition. Resolved grain doesn’t let much detail out, but admittedly, this is unquestionably superior to DVD. After Vorhees is unmasked, the texture in the makeup shows through, helped by concentrated lighting. Wide shots and exteriors lack the same quality, left murky by what is now sub-par sharpness.

Stereo and 5.1 options both perform well. Notably, the pair equal one another for most of the runtime. Other than extending the score and placing an occasional scare in the rears, the 5.1 track exhibits the same dynamics and positioning. That said, the front soundstage stretches wide, precise in its separation to truly utilize the available channels.

On occasion, dialog falls in fidelity. It’s brief, but but noticeable. Otherwise, clarity exceeds expectations for a late ‘80s offering, both in highs and lows.

Director John Carl Buechler and Kane Hodder make up the first commentary, then both jump into a second to chat along with star Lar Park-Lincoln. The 15-minute making of carries the title Jason’s Destroyer, a better name than the movie itself. A look into telekinesis follows, and after, a fun, brief makeover session with two of the actresses reconnecting years after their roles. Buechler introduces 15-minutes of deleted scenes, sadly from a deteriorated workprint, but this is all that remains of each kill. Trailers, stills, and set gallery follow.

Giving Jason Vorhees a capable opponent adds a spark to The New Blood, but the movie never really capitalizes on it.

The 15 unaltered images below represent the Blu-ray. For an additional 37 Friday the 13th Part VII: The New Blood screenshots, early access to all screens (plus the 120,000+ already in our library), 120 exclusive 4K UHD reviews, and more, subscribe on Patreon.