In the infamously few minutes Jason Takes Manhattan takes place in New York (and it’s mostly Toronto), the eighth sequel provides a “what could have been” preview. The city satire is outlandishly good, showing Jason Vorhees kicking open the door to a diner and patrons sitting in their seats as if nothing happened. Walking through Times Square, no one casts a glance at Vorhees, as if sludge-covered, hockey-masked monsters routinely wander downtown.

Under the opening credits, muggers toss a stolen wallet into a barrel of sludge (in which a rat nearly drowns), because the vision most Americans had of the city during the decade did show toxic goop lining an alleyway. Cut to someone cooking cocaine over a burn barrel, another shooting heroin next to him.

Jason Takes Manhattan is nothing other than stock Friday the 13th

In that context, Vorhees turns into a vigilante hero, audiences waiting for him to appear and clean up New York’s gruesome crime rate. While creating a maritime disaster on the way over from Crystal Lake, Vorhees is even nice enough to pull the fire alarm after setting a victim ablaze. And sure, he tries dragging star Jensen Daggett to her death into sewer sludge, but also saves her from a rape. In his own twisted, reanimated way, he saves as many people as he kills.

Friday the 13th and its sequels all exuded the 1980s in their own way. Fashions and hairstyles cannot hide from a camera. Jason Takes Manhattan though is a film utterly, totally, completely of its time, because this image of New York, with leather clad gang members, graffiti-laced subways, and hair metal aficionados only existed at that moment. To revisit this killing spree is to step into a cinematic time machine – at least the last twenty or so minutes.

Paramount stripped the original concept to its threadbare result, limiting actual city staging, instead pitting Vorhees against graduating high schoolers on a cruise ship who fight their repulsive principal as much as the title creature. In that, Jason Takes Manhattan is nothing other than stock Friday the 13th, starting with sex and nudity, pushing toward drugs and general defiance of authority. Anything to appease a crowd thinking there still wasn’t a high enough body count by the eighth movie. It’s not so much a disappointment based on what Jason Takes Manhattan is, but rather never living up to its own tease. 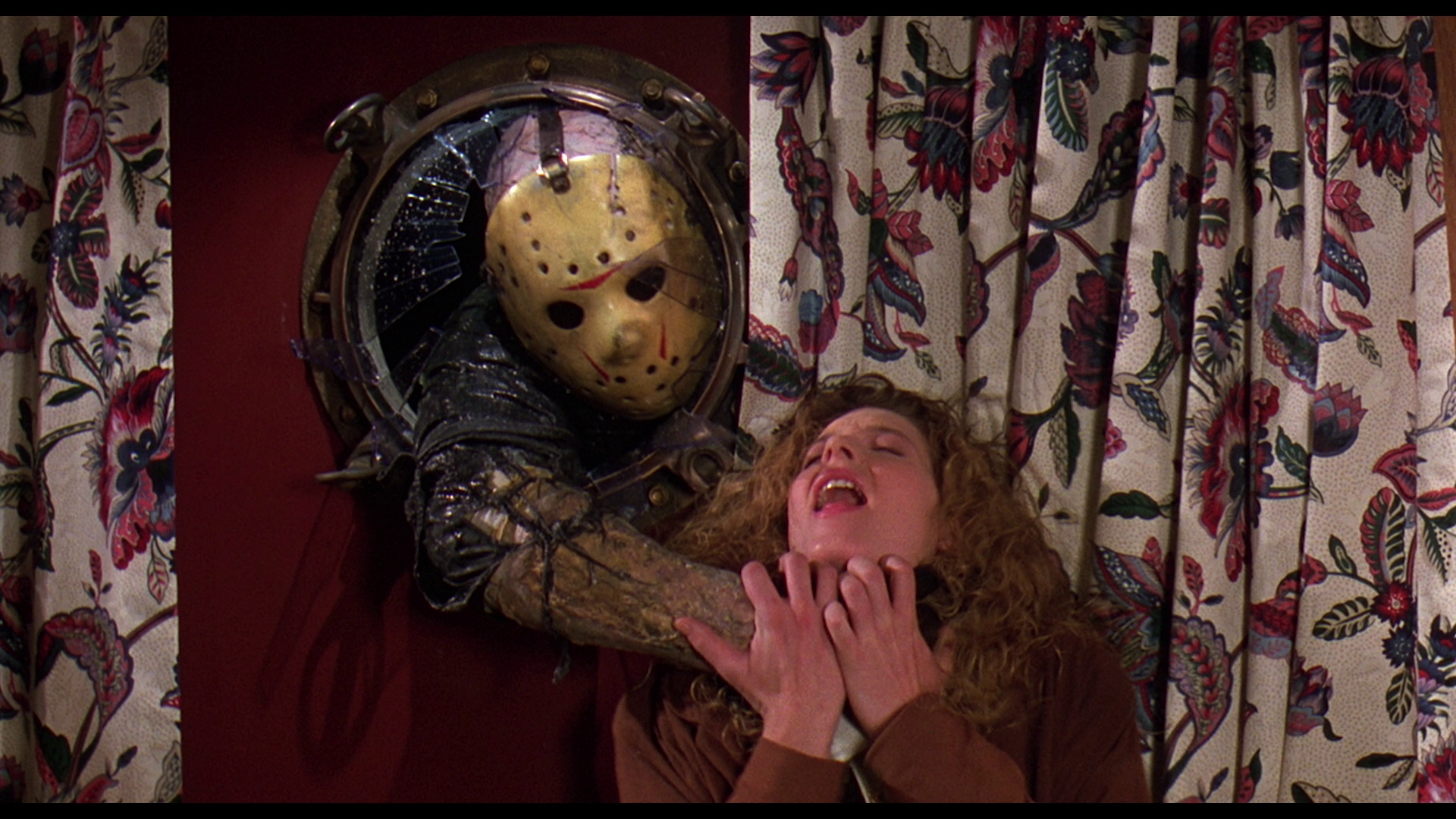 Black levels hit an exquisite depth, reaching a satisfying density. There’s no lag to pure black at any moment. Likewise, contrast doesn’t lose anything to age, crisp and bright throughout, off-setting those shadows to maintain superb dimensionality.

Pleasing color reproduction presents firm primaries, richly saturated, bringing out those few Times Square shots in full. Blood hits a pure red, and when not in a bowels of a boat, other hues flourish too. Accurate flesh tones sit at the center, unchanging as Jason Takes Manhattan moves forward.

Stereo or 5.1, and while limited in dynamics, the 5.1 wins the day. Extending rain and storm effects, dance floor music, and rushing subways makes a difference long term. Spacing isn’t super precise, more an extension from the stereos. Still, it’s convincing in the moment, and naturally spread.

False marketing subtitle aside, Jason Takes Manhattan at least offers a tease for the idea’s potential and a satirical time capsule.

The 15 unaltered images below represent the Blu-ray. For an additional 37 Friday the 13th Part VII: Jason Takes Manhattan screenshots, early access to all screens (plus the 120,000+ already in our library), 120 exclusive 4K UHD reviews, and more, subscribe on Patreon.