Jason Lives outright goes for it, breathlessly murdering anyone in the way of a continued rampage. The whole time, Jason Lives does so with a concentrated, sarcastic wink. It’s as much a genre film as it is parody and homage, stupidly enjoyable in how far it’s willing to go.

The opening takes place on a derivative stormy night, panning over a cemetery as grave robbers approach. Lightning revives Vorhees, and Jason Lives proceeds on the back of Universal and Hammer horror cliches. Cue The Shining music – or rather a nearby derivative – and a sheriff who won’t believe the kids as they scream about monsters. Jason Lives relentlessly tracks down tropes wherever it can find a place for them.

Rules no longer apply, and Jason Lives has a blast with this possibility

Sure, the setting is another summer camp, but victims veer from helpless, sex-crazed teens (although Jason Lives has those too). One of Vorhees’ first fatalities ends a pompous rich couple, drinking wine in the forest. Another pair believes money will save them. After taking a spear to the face, a credit card floats downstream, labeled “American Excess.” That’s gold, flawless, dead center Reagan era comedy, and it’s almost disappointing Jason Lives doesn’t go completely toward Airplane territory.

“What were you gonna be when you grew up?” asks one of the kids hiding under a bed with his friend. The eight-year-old accepted his fate because undoubtedly, he’s seen more Friday the 13th movies than the sheriff or the counselors supposedly protecting them. That kid knows how this ends up. So does Tommy Jarvis (now played by Thom Matthews), seeking to therapeutically cremate the creature that traumatized him. That doesn’t work, of course.

Practically parody or not, Jason Lives rates as one of the critical entries looking forward. By reanimating Vorhees as a corpse, there’s at least a pithy logic at play, allowing invulnerability and super strength to finally make sense. Movie sense, but still. He’s just as much the Frankenstein monster as a mummy or zombie. Rules no longer apply, and Jason Lives has a blast with this possibility.

What it lacks in a deft comedic touch (a grueling paintball sequence, particularly), the violence, clipped as it is, makes up the difference. Watching someone slam into a tree carved with a smiley face adds the color missing from repeated stabbings; Jason Lives still uses those too, of course, but without lag. It’s non-stop brutality, and totally admitting how ridiculous that is. 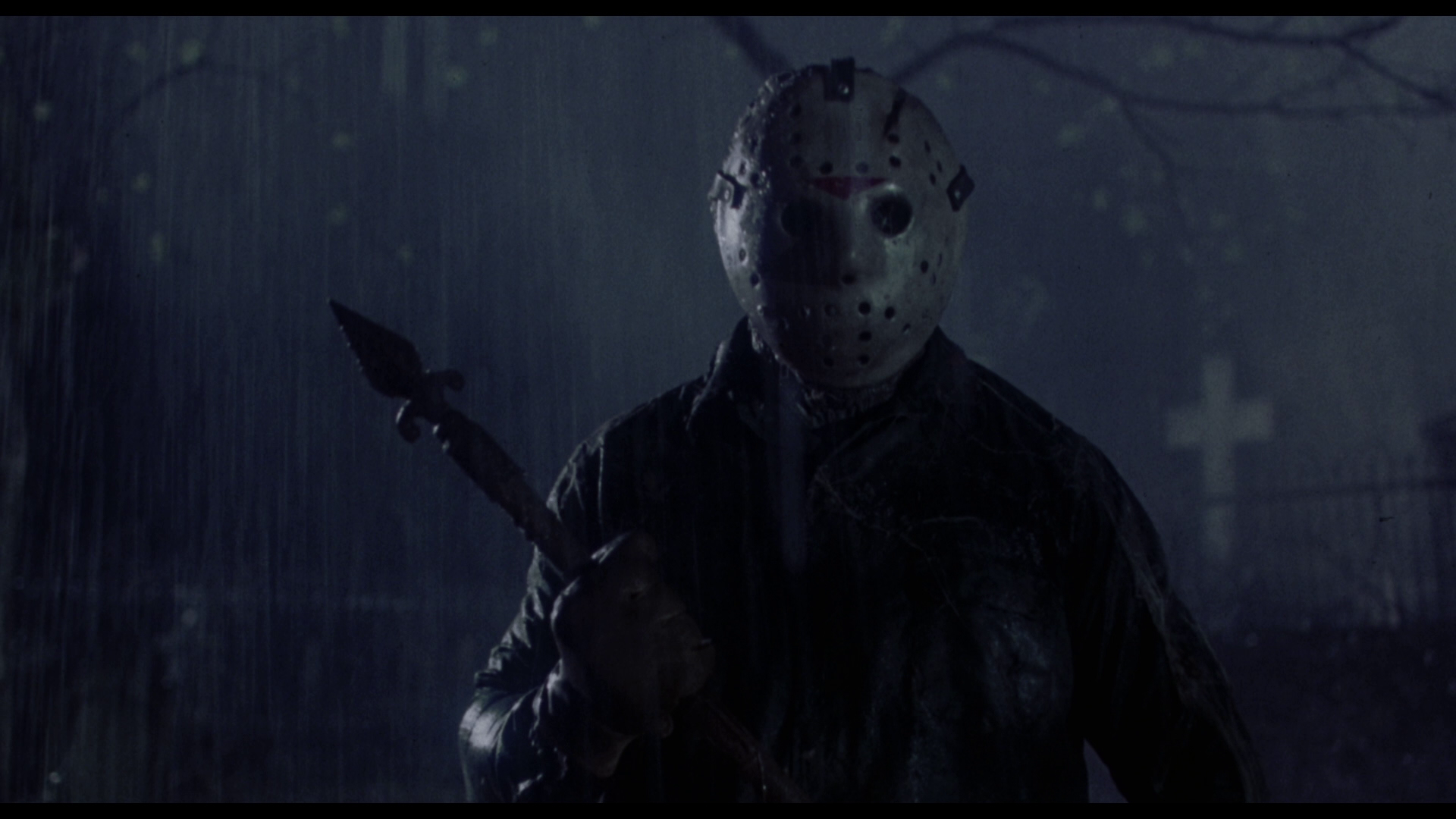 Set mostly at night, black levels become a necessity. Calibration keeps them rich, thick, and dense. Shadows rarely crush. Exquisite depth keeps up for the full runtime, paired with perky contrast. Highlights stand out, and those lightning flashes break up the visual repetition.

Gorgeously replicated color emboldens reds to make sure no blood is spared. Superb primaries saturate the screen, giving the images an attractive variety, from greenery to cabin interiors filled with bright blankets and pajamas. When fire breaks out for the finale, the orange sells heat.

The first in the series to make a significant move to 5.1 (mono also available), winds and rustling leaves keep moving throughout, nicely creating the enveloping soundstage. Thunder flows front to back, and the score picks up to fill the surrounds. A key action sequences involves a flipping trailer, widely stretched into every channel. Same goes for the flames in the final moments.

Around 20-minutes in, dialog takes a temporary turn for the worse. For whatever reason, exchanges there take on a roughened sound, coarsely spoken and lacking the otherwise pristine fidelity everywhere else.

Picking up where A New Beginning’s disc left off, another chapter of Lost Tales from Camp Blood and faux-crime documentary Crystal Lake Massacres open the bonus menu. A 13-minute making-of charts the production, with an alternate ending and extended gore scenes next. Promo materials, from trailers to galleries, round this one out.

Wiping out a camp with a smirk, Jason Lives parodies, pays homage, and demeans itself in an entertaining, outlier sequel.

The 15 unaltered images below represent the Blu-ray. For an additional 27 Friday the 13th Part VI: Jason Lives screenshots, early access to all screens (plus the 120,000+ already in our library), 120 exclusive 4K UHD reviews, and more, subscribe on Patreon.