In a dream sequence, Tommy Jarvis (then still played by Corey Feldman) witnesses two men digging up Jason Vorhees’ grave. It’s clever, hinting at Vorhees’ growing fan base, media hype, and serial killer culture. Friday the 13th lore, were it real, certainly leads to a place where someone concocts a scheme to unearth the slasher villain’s body.

But no, A New Beginning isn’t headed in such a direction. That was indeed a dream, smash cut to a now grown Jarvis, being transported to a recovery facility. A New Beginning introduces another plausible idea, that of someone surviving a slasher movie rampage and being unable to cope. Part 2 tried as much, then blew it. A New Beginning will too.

A New Beginning’s ultimate climax suggests a renewed focus. That wasn’t to be

Jarvis is an empathetic figure, forced into near silence, always looking blankly ahead, clearly missing his innocence. It’s genuine, something not often said about Friday the 13th movie. Then Jarvis is buried in the script, making room for cartoon caricatures.

The redneck hicks, the goth girl, Grease-like greasers, the chocolate-eating fat kid, a morbid ambulance driver. Wish for their early deaths. A New Beginning, if nothing else, deals most of them swift justice for the audience’s sake. Still, they exist too long in a script scrambling for tonal consistency, either going all-in on camp schlock, or willingly approaching a post-slasher world. If only this movie settled on either.

Instead, it’s obnoxious, grating, and loud. Filmed under the false title Repetition, that’s acknowledgment of the formula, bringing nudity and gore to teen-ish kids, and like The Final Chapter, again involving a young kid to check that demographic box for when A New Beginning reached video stores.

Awaiting viewers in the final act is another capable brawl against Jason (but not Jason) who inexplicably takes a hefty beating, and the cast exhibits their stupidity in hovering over the masked man’s body. The twist isn’t much of one, only straining credibility and logic, then one-upped in a bid to continue the Friday franchise. While messy, sloppy, and totally ill-conceived, A New Beginning’s ultimate climax suggests a renewed focus. That wasn’t to be – Vorhees himself proved too popular – which is a shame. More than a zombie lurking in the water, turning things over to a kid exposed to gratuitous violence and becoming the monster offered a creative lure. Marketing always wins in Hollywood, and monsters never die. 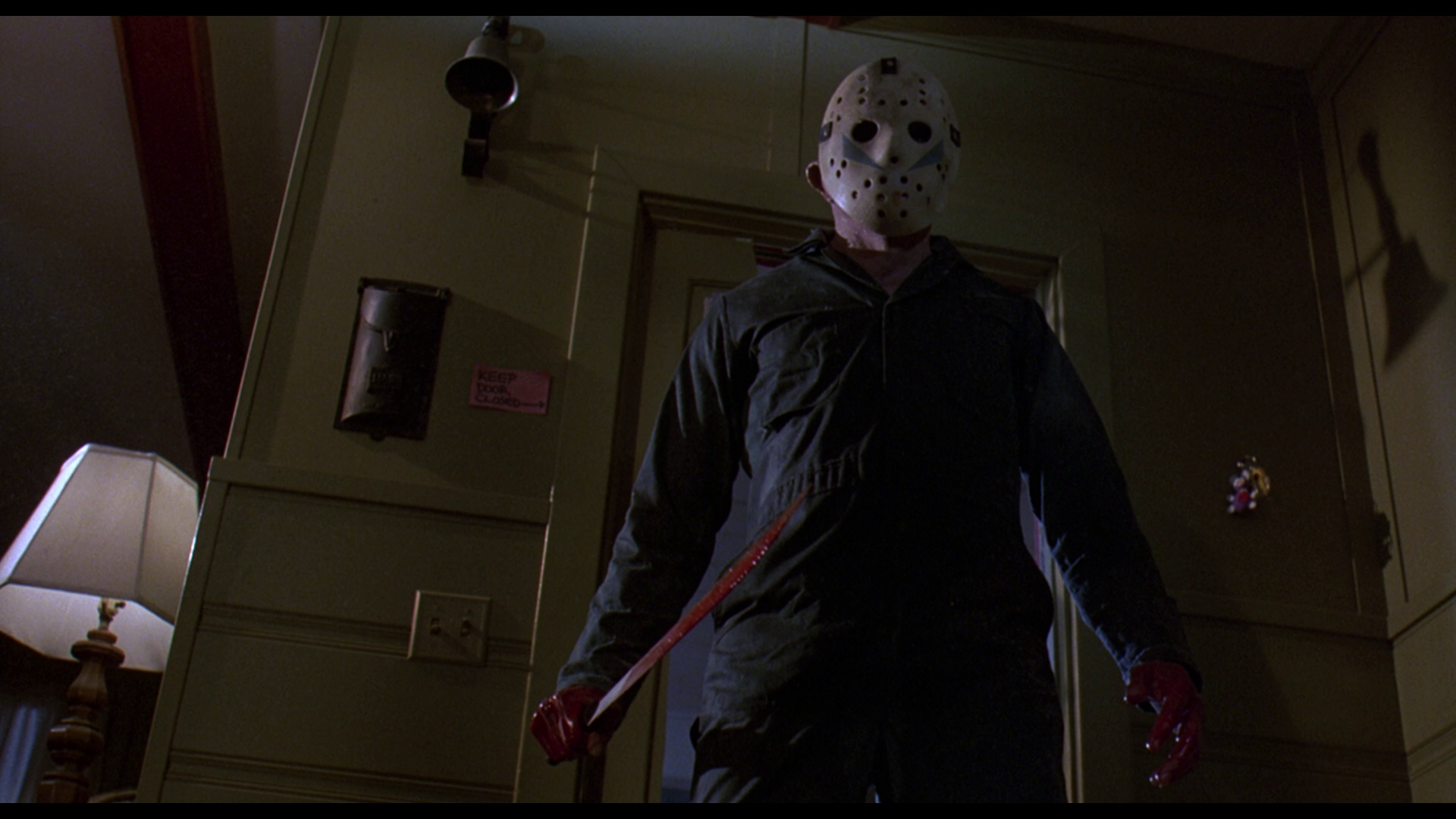 Strong depth runs through much of A New Beginning, although crush does dampen things, especially Demon’s death in which he’s clad in black leather, stuck in a barely lit outhouse. Otherwise, dimension achieves a pleasing result, backed by stable, consistent contrast.

Purists choosing mono miss little compared to the 5.1 mix. Other than a few snapped twigs in the rears, surround work offers little else. Stereo expansion is appreciated though, even if this mostly factors into the score.

Scream offers a new commentary, bringing together the actress trio Melanie Kinnaman, Deborah Vorhees, and Tiffany Helm. The other two commentaries are ports, including director Danny Steinman and cast, the other with filmmakers/fans Adam Green and Joe Lynch. Both Lost Tales from Camp Blood and Crystal Lake Massacre Revisited continue where they left off on the previous film’s Blu-ray. A small 11-minute making of comes before the hefty promo galleries (trailers, posters, and more).

Friday the 13th: A New Beginning

Like The Final Chapter, the New Beginning subtitle turned out to be false, and that’s a shame given the possibilities going forward.

The 15 unaltered images below represent the Blu-ray. For an additional 38 Friday the 13th: A New Beginning screenshots, early access to all screens (plus the 120,000+ already in our library), 120 exclusive 4K UHD reviews, and more, subscribe on Patreon.