Corey Feldman was barely a teen when starring in Friday the 13th: The Final Chapter. His character, Tommy Jarvis, was into kids stuff. Videogames, monsters, makeup effects – the usual. It’s a defiant choice to make Tommy the lead.

In the ‘80s, growing public dissent took aim at slasher movies. Studios relied on MPAA ratings to shield themselves. Then came the video store boom. Friday the 13th VHS tapes filtered into homes, and kids noticed.

Jarvis acts like any of those kids. He jumps around excitedly in bed when a women undresses in her bedroom window next door, sometimes unable to look, other times unable to look away. The R rating acted like a tissue paper-thin barrier, and their defense fell apart when studios so obviously and actively planted an underage demographic in the hero role.

The ‘80s gave Michael Meyers and Leatherface videogames, Rambo and RoboCop cartoons and comics (and videogames), then eventually, Freddy Krueger and Jason Vorhees too. The Final Chapter is fascinating in calling back to that era, right on the precipice of breaking free from censorship’s grip. No matter the material, merchandising found its lure to a wider audience.

The Final Chapter acknowledges, partially, a need to divest with campgrounds

In dialog, one of the teens refers to a, “Super Bowl of self-abuse,” indirectly chiding the people who kept spending paychecks to see Friday the 13th sequels. By way of expecting a complete finish, The Final Chapter gains a little, certainly beyond Part 2’s and Part III’s sedate offerings. There’s attachment to past lore in newspaper headlines. Rob (Erich Anderson) adds mystery as a hitchhiker, maybe/maybe not another killer. Although still a series (or a genre, really) about punishing sex and the cast spends an inordinate time undressed, they carry personalities. For the first time, there’s someone to care about, partly credited to bringing together more diverse actors. Parents, kids, teens – it’s more encompassing, and a touch more suburban.

The Final Chapter acknowledges, partially, a need to divest with campgrounds. It’s not far off, including the usual lakes and forests, but the shift is happening. Not as far as space or New York, but still avoiding the monotony in small steps. While still refusing to confirm Vorhees himself as supernatural or monster or zombie – he just is – his ability to take a beating allows for a stupidly fun, violent finale, capping a sequel allowed to stretch its bloodshed.

With its final image, Jarvis stares directly into the camera, eyes drifting toward evil, a brazen acknowledgment connecting real world violence to fiction. Jarvis, exposed to brutality, will act on it. Yet, The Final Chapter doesn’t seem too worried about kids jumping from second story windows. It trusts them to know better by inviting them in in the first place. 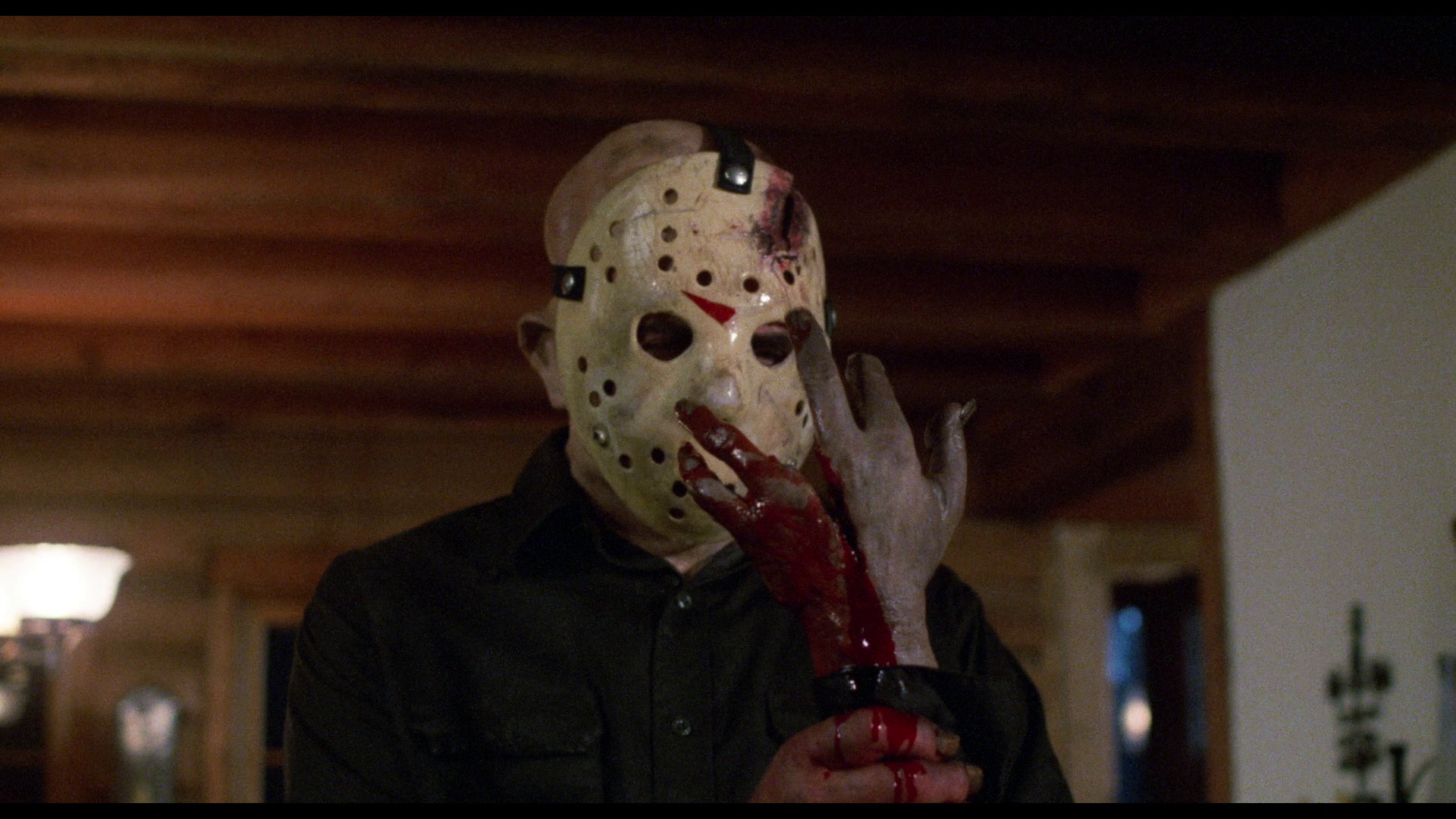 Another new 4K scan from Scream Factory showcases exceptional, precise detail. At times spectacular texture accurately replicates the film-based source, finding sharpness even in the darkest areas. Gorgeous grain control keeps The Final Chapter looking absolutely natural, never once giving in to digital faults like compression. That allows definition to prosper, bringing out small touches lost on any format prior.

Fantastic black levels sell the shadows, needed as The Final Chapter nears the last act. Lights go out and action shifts into cellars, crushing only where necessary, and allowing depth to remain. Even in those darkest areas, light scatters, adding highlights. That matches overall bright contrast elsewhere, adding some visual studio gloss to this slasher.

As with the rest, color impresses too. Saturation hits a high mark, expertly emboldened without leading to bleed. Precise flesh tones continue throughout, surrounded by vivid blues, reds, and greens. As rain begins to fall, the appropriate, chilly blues set a mood.

Both the mono and 5.1 mixes (DTS-HD no matter which) suffer unfortunate losses in fidelity. It’s as if dialog was recorded without care, allowing ambient noise to cloud the recordings. Lines sound akin to running a tape over sandpaper, coarse and harsh. The music sounds fine though.

Other than occasional forest sounds spreading into the rears, the 5.1 track does little with the potential space. Most of The Final Chapter sticks to the center, immobile even as action spins up.

Audio was lost, sadly, for the deleted scenes, narrated by Zito as commentary to give them some context. A Crispin Glover dance outtake and alternate ending keep Zito’s involvement, the latter bringing Kimberly Beck in too. A general featurette focusing on the production runs 11-minutes, and a fun faux crime documentary gives the events a real world vibe. Another chapter of Lost Tales from Camp Blood follows, and promo materials (still, posters, trailers) coming up last.

Friday the 13th: The Final Chapter

Antagonizing moral critics with a child protagonist, Friday the 13th: The Final Chapter poses an interesting cultural transition point for the genre.

The 15 unaltered images below represent the Blu-ray. For an additional 35 Friday the 13th: The Final Chapter screenshots, early access to all screens (plus the 120,000+ already in our library), 120 exclusive 4K UHD reviews, and more, subscribe on Patreon.