Seventeen minutes into Friday the 13th: Part III, the main characters make their first appearance. Before that, a replay of Part 2’s ending, and a slow, meaningless interlude with two convenience store owners, soon to meet their end at Jason Vorhees’ hand. It’s clear, by this point, the creative team realized how little plot matters to the Friday formula.

There’s no exploration of Jason in the script. He just is. People who come near him find themselves in an unwinnable territorial battle. That’s it. At least, Friday the 13th: Part III offers one self-referential line to acknowledge the inane repetition – “Sex, sex, sex. You guys are getting boring.”

But there’s more than sex (although there’s plenty of that too). Friday the 13th: Part III brings in cliché stoners, who like the rest of this cast, exist only as props waiting for gore makeup. A biker gang never stands a chance either.

Friday the 13th: Part III does find a capable way to end things

For all the wonky 3D attempts and grueling pace, Friday the 13th: Part III does find a capable way to end things. Chrissy (Dana Kimmell) gives Vorhees his first screen beat down while on the run through stereotypical horror thrills – a car out of gas and Chrissy falling on some rocks, because that’s what women do in genre movies. Add in a collapsing bridge and clever staging inside a barn to send Friday the 13th: Part III home via a memorable climax.

After three movies and bettering box office receipts, it’s odd no one at Paramount understood their new franchise. Later films did, adding a supernatural spark to explain Vorhees’ invincibility, yet there’s no lore, no context yet. It leaves these sequels flat and on autopilot, holding true to the core idea of exploitation cinema, if arduous to get through short of the kills/splatter.

The MPAA forced cuts to the violence, as they did in Part 2. Still, this is relatively bloody, offering the requisite stabbings in detail during their brief showings. Vorhees didn’t change his game, hacking at victims, slashing throats, and because he apparently likes toying with people, hiding bodies to maximize jump scares. Seems like a lot of extra work. Then again, given Friday the 13th: Part III’s pace, it gives Vorhees something to do while viewers wait. 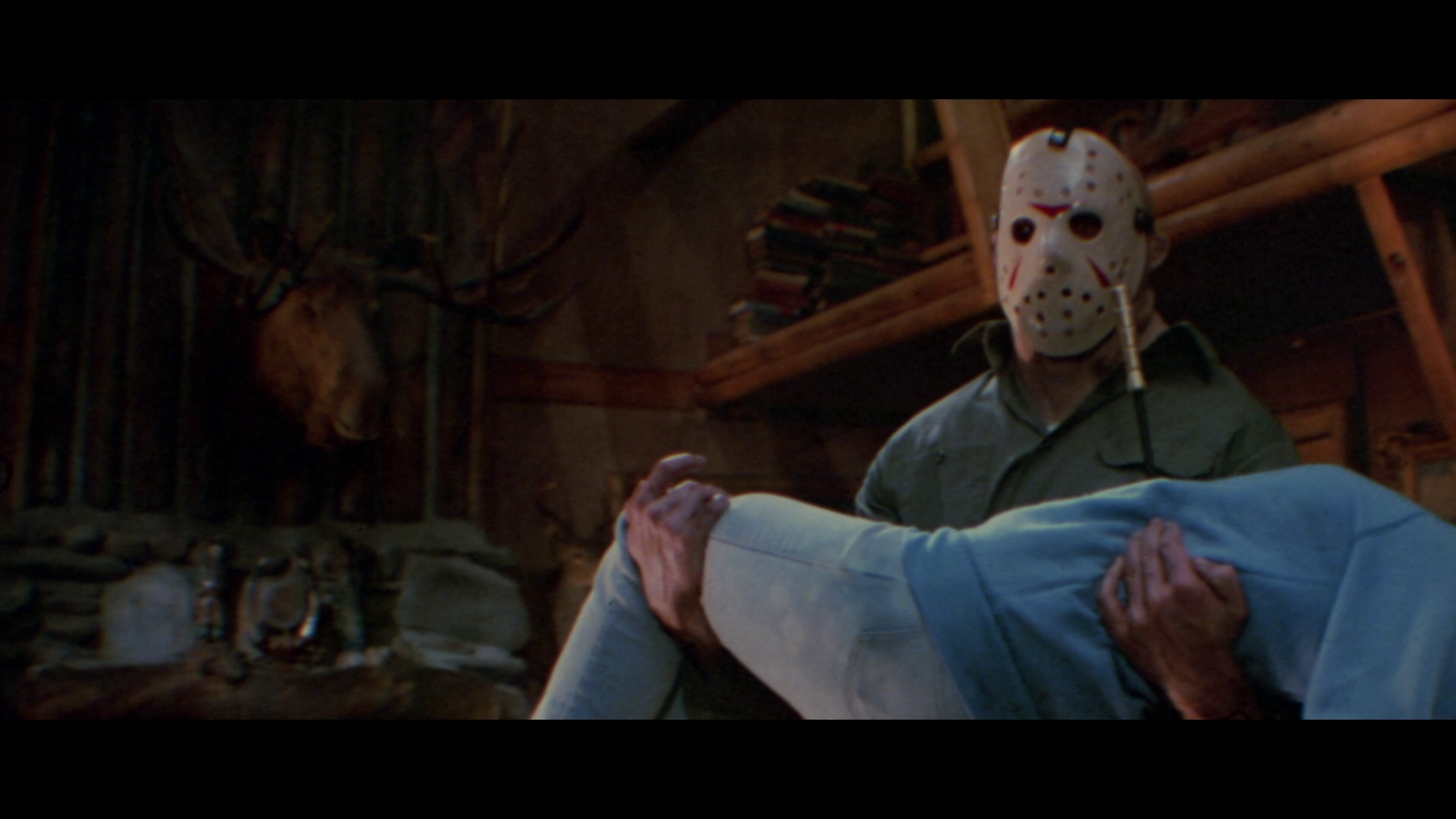 For the first time at home, Scream Factory brings the 3D version to disc… and sadly, because TV manufacturers don’t care, DoBlu is no longer equipped to handle 3D.

Focusing then on the 2D version, the 3D tech lends this new 4K scan a hazy quality. The lenses not only bring in dirt as permanent parts of the print, but cause waning focus. While clearly a best-as-possible effort, there’s not much potential given the murkiness inherent at the source.

As such, detail doesn’t explode. Neither does sharpness. Texture wanes along with definition. The encode keeps grain natural and pure, a further indicator the 3D process is causing concern, not Scream’s transfer.

Friday the 13th: Part III works everywhere else, including some grand, bright color. Saturation nails primaries, including Vera’s red outfit, striking against the pure black sky. And, other than a few a lackluster moments, shadows keep to those rich blacks. Contrast holds its own stability too.

Mono and 5.1 options both use DTS-HD. Each bring reasonable clarity to dialog, and pristine scoring. Screeching violins hold a clean treble. In 5.1, the iconic theme bounces between the stereos in a nice touch.

Given the limited spacing and near non-existent discrete use, the mono track is preferred for authenticity. No real low-end pop factors in either, so unless those minor moments matter, stay with the mono.

The cast comes together for a commentary track, revisiting their roles. Fresh Cuts spends 13-minutes explaining how the sequel came to be, and dropped ideas. Lost Tales from Camp Blood continues on this disc, with promos (trailers, radio spots, stills, posters) following.

3D can’t save Friday the 13th: Part III’s routine, derivative murder spree, although the movie does offer a passable finish.

The 15 unaltered images below represent the Blu-ray. For an additional 30 Friday the 13th Part III screenshots, early access to all screens (plus the 120,000+ already in our library), 120 exclusive 4K UHD reviews, and more, subscribe on Patreon.