Interactive Storytelling For The Red Hood

Batman: Death in the Family is a bold experiment on Blu-ray that doesn’t always work but provides several satisfying choices in a choose-your-own adventure format. Featuring seven different possible endings, the interactive movie gives viewers several options based on what originally happened in Batman: Under the Red Hood. WB Animation should be given credit for testing out a choose-your-own adventure with one of their most popular properties.

Starring one of DC’s most popular characters from Batman’s supporting cast, the animated tale explores the different paths possible for Jason Todd and the Bat family in the aftermath of his death at the Joker’s hand. It is taken from one of the Caped Crusader’s most iconic comic book stories from the 1980s, Batman: A Death In The Family.

Jason Todd’s death as the second Robin was the result of a fan vote held by phone and remains an indelible part of Batman’s lore. Years later, he was resurrected as the Red Hood.

Batman: Death in the Family breaks new ground for DC animation with its interactive story options

One path takes viewers right down the traditional story arc from Under The Red Hood, adapted from Judd Winick’s acclaimed 2005 comic book run. If you’ve already seen Batman: Under The Red Hood, now almost ten years old, there aren’t any big surprises. The twists and fresh material arise from the alternate choices.

Produced, directed, and written by Brandon Vietti, the interactive story breaks new ground when the viewer changes what happened with their choices. What happens when Jason Todd survives his beating by the Joker in Bosnia? The coolest choice offered is down one of the possible paths when you pick which side Two-Face’s coin lands.

The interactive approach does affect the linear nature of the drama. The storytelling is short and abrupt, often short-changing important character developments. Some of the paths have interesting arcs you wish had more screen time.

Everyone from Black Mask, Superman, Hush, Two-Face, and even Red Robin pop up in these alternate paths, all mostly leading to pain and misery for Jason Todd. This is for fans that enjoy Jason Todd embracing his darker and more violent tendencies, often ending up on the other side of the law from other Batfam like Dick Grayson and Barbara Gordon. The Red Hood becomes unhinged with guns ablaze in more than one possible route. One has Jason murdering the Joker in cold blood.

The interactive Blu-ray presentation works better than expected, though the multitude of options can become mildly confusing once you’ve gone down several different choices. I actually lost track of one possible path and had to go back to find it again. I imagine some fans would have preferred a traditional linear narrative with the same premise.

Batman: Death in the Family breaks new ground for DC animation with its interactive story options dictated by the viewer. Mostly a vehicle exploring the different possible paths open to Jason Todd after his death as the second Robin, the choose-your-adventure format has potential that is largely unmet here in this first attempt. 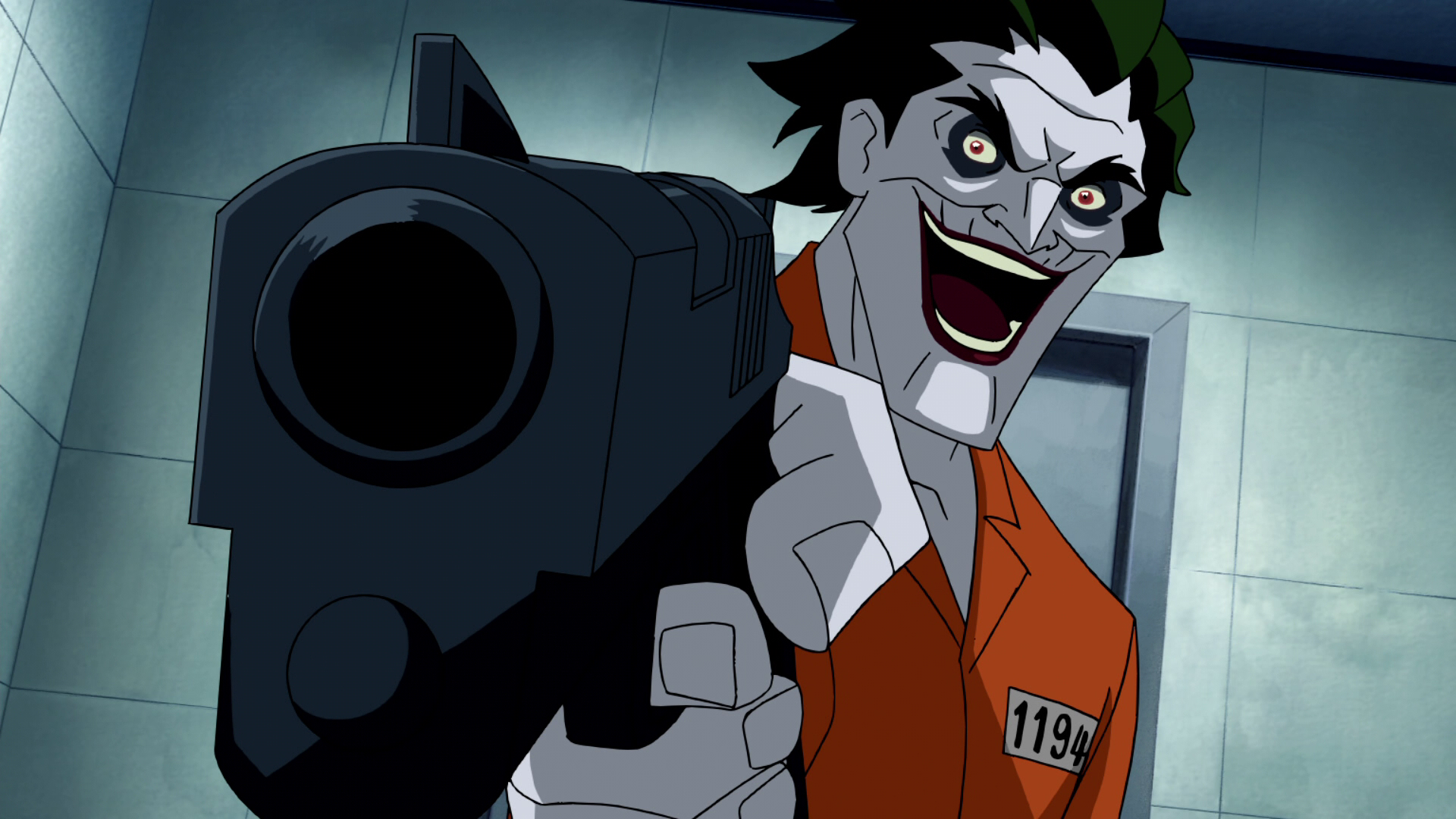 Batman: Death in the Family’s animation style owes a great deal to 2010’s Batman: Under the Red Hood. Scenes from that movie are interspersed with all-new animation in largely seamless fashion. Aside from the new choose-your-own adventure mechanics, the picture quality falls right in line with earlier animated DC movies.

The character designs by Dusty Abell (Crisis On Two Earths and other DC movies) are hit or miss with a much thicker Joker design than normal. Utilizing designs that are now almost ten years old, Batman: Death in the Family almost has a retro feel for long-time DC fans.

The 1.78:1 presentation has superior black levels and mostly quality line art. The flawless video perfectly captures the saturated primary colors and darker elements. I couldn’t detect any significant banding in the moderate AVC encode. WB Animation animates these DC features at 1080P resolution and they always look well suited for Blu-ray. The darker color palette may have popped more in 4K resolution but this BD presentation looks quite fine in its own regard.

Batman: Death in the Family’s 5.1 DTS-HD MA has an active, dynamic sound design with a lot going on at any given time. The score by Christopher Drake nicely fills up the entire soundstage from front to back with orchestral swells and other percussive elements. Dialogue is fluidly reproduced without affecting the overall dynamics.

Optional English subtitles and nine other foreign language choices play in a white font. French and German dubs are available in 5.1 Dolby Digital.

Batman: Death in the Family receives all the marketing hype because Batman sells like no other character but this Blu-ray from WB is actually a collection of standalone DC Showcase animated shorts. Four other effective shorts are included in all, some previously released as companions on earlier animated DC films.

Characters like the Phantom Stranger and Adam Strange probably wouldn’t sell enough on their own to justify solo releases, which is how they end up playing second fiddle to Batman.

Interestingly enough, Batman: Death in the Family is available in 4K UHD resolution on streaming platforms. Warner is only putting out a Blu-ray version for the choose-your-adventure interactive story. They originally announced a UHD disc and quietly canceled it.

Sgt. Rock (14:55 in HD; 5.1 Dolby Digital) – The action-packed short has Sgt. Rock confronting Nazi soldiers while fending off vampires, werewolves and even Frankenstein. Perfect for the Halloween season, it’s nice seeing the underused DC character on the screen.

Adam Strange (16:05 in HD; 5.1 Dolby Digital) – A grisly and violent short that sees the aftermath of a brutal war between Rann and Thanagar. It’s a post-modern sci-fi adventure that strips the character of his Silver Age roots and updates his struggles for 2020 with gritty realism.

The Phantom Stranger (15:07 in HD; 2.0 Dolby Digital) – Directed by Bruce Timm, the Stranger floats in and out of this tale about a group of hippies falling under the sway of a cult leader.

Death (19:08 in HD; 5.1 Dolby Digital) – Featuring the popular character from Neil Gaiman’s acclaimed run on Sandman, this short has Death comforting a struggling artist dealing with self-doubt. It’s an effective piece that smartly captures the essence of Death as a character from the printed page.

Audio Commentaries – All five animated shorts receive enthusiastic commentaries from two former hosts of DC Daily, Hector Navarro and Amy Dallen. While neither are directly connected to any of the included shorts, they provide largely informative nuggets from a fan’s perspective.

The 15 unaltered images below represent the Blu-ray. For an additional 27 Batman: Death in the Family screenshots, early access to all screens (plus the 120,000+ already in our library), 120 exclusive 4K UHD reviews, and more, subscribe on Patreon.