Makeup artist Tom Savini didn’t return for Friday the 13th: Part 2. His response when asked why was succinct: “Because it was stupid.”

Jason Vorhees remains a beloved slasher icon, which is surreal given his baffling, nonsensical origin. First drowned in the late ‘50s, he inexplicably springs back to life in the early ‘80s, and in five years, grows six feet to kill people in this sequel. Yes Tom, it was stupid.

Friday the 13th: Part 2 is a general retread, only where the original film honed in on Psycho’s conservative sexual disdain, this one only sort of does. Certainly, Jason keeping his mother’s head in a decrepit shack is more than a small callback.

… if there’s a success to Friday the 13th: Part 2’s assembly line nature, this sequel does offer what audiences paid for

While spending a night out at a bar, camp counselor Ginny (Amy Steel) tries to humanize Jason, bringing a psychological edge to his actions, noting he never understood death before his mother was decapitated. Except he drowned before that. Seems like hands-on experience, but at least Friday the 13th: Part 2 tries. The series either worked around or outright dodged who or what the young Vorhees was/is. Psychology brings him in line with rival Michael Meyers, if avoiding the zombie/undead element.

On release, critics lambasted this sequel. That’s no surprise. Most didn’t lavish praise on the original either, striking a nerve during a decade where violence was so prominent in society. It’s not so much Friday the 13th: Part 2 is violent – because of course it is – but rather it’s senselessly so. It’s plotless, aimless, meandering filmmaking, never making a point between exploitative nudity and gore.

In the opening scene, Adrienne King returns as Alice, tormented by Friday the 13th’s events, and ignoring the overlong recap, it’s effective. Long takes drift the camera around her apartment. She has to confront what happened, and in a short phone conversation, tries to reassure her parents. That’s rare honesty in a genre known to kill and move on. Then she takes an ice pick to the skull and Friday the 13th: Part 2 moves on, never to contextualize as such again.

After Alice’s death, the opening logo explodes. That’s appropriate, suitably trashy and campy. It fits because the genre so quickly needed bombast to sell itself, and if there’s a success to Friday the 13th: Part 2’s assembly line nature, this sequel does offer what audiences paid for. Sex, boobs, blood, and campfires. Never mind the why because writer Ron Kurz didn’t seem to know either. 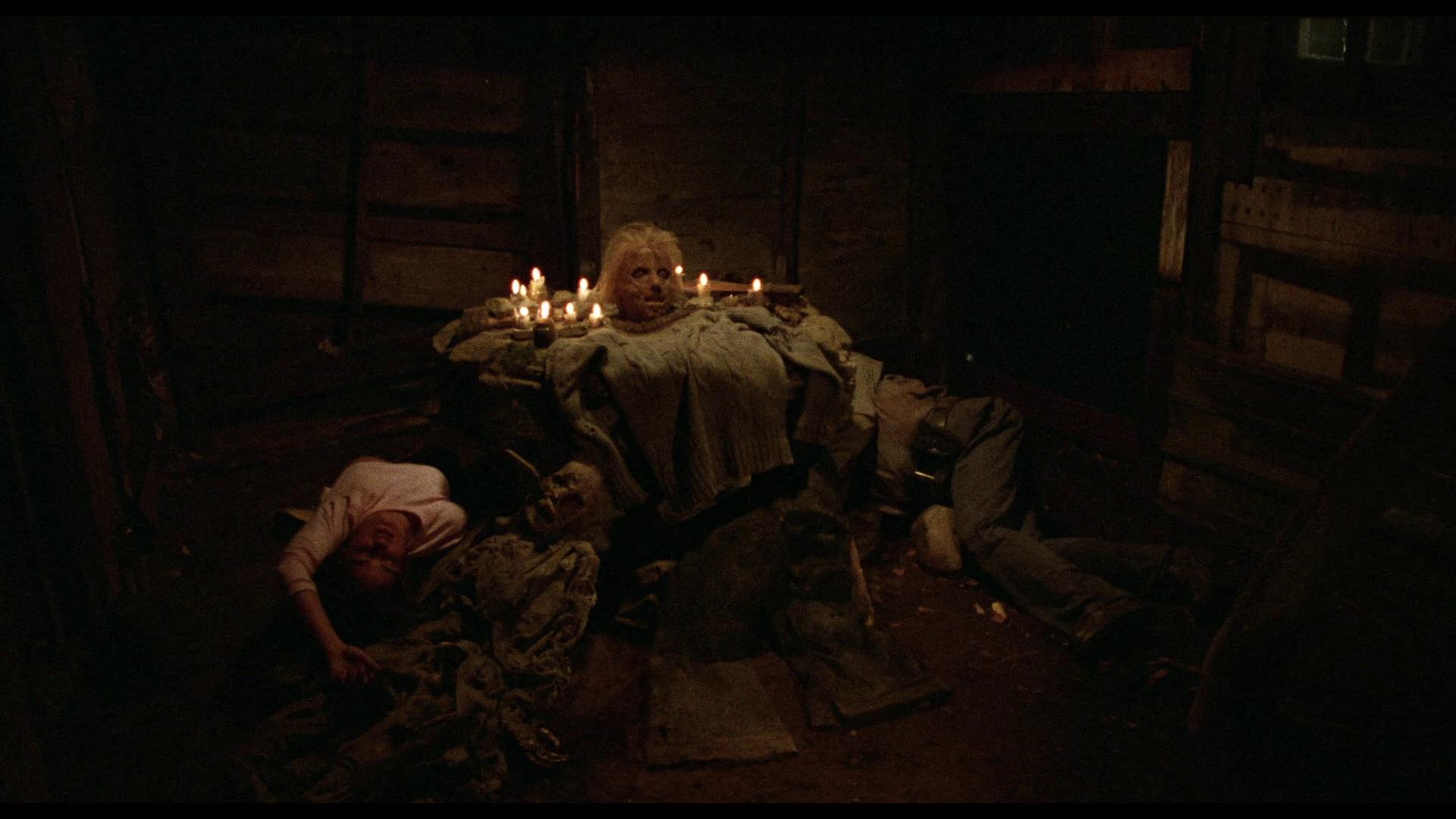 Scream Factory debuts a new 4K scan for this Blu-ray, a gorgeous, textured presentation making full use of this format. Exceptional definition renders environments in total, pulling out nuance in wood cabins, trees, and facial detail. Even in the dark, Friday the 13th: Part 2 loses nothing, the encode keeping pace to render an accurate grain structure.

Impressive black levels rarely dip, solidified in maintaining shadows that permeate a good majority of this sequel. Density sublimely adds to the fright factor, always suggesting a menace nearby without gobbling detail. Likewise, premium contrast acts where needed, keeping this all dimensional and pure.

A genuine boost to color finds primaries at their best. Clothing stands out from darkness, saturated, yet never overboard. Spot on flesh tones lose nothing, and not a moment here feels overly digital, only natural to the film stock.

Both 5.1 and mono track bring exceptional audio clarity, a jump from the first Friday the 13th given the studio-produced nature rather than independence. There’s no mistaking the ‘80s origins, although the slight aging barely factors.

In the audio menu, two commentaries sit separate from the bonuses. One involves the cast, the other pairing Amy Steel and filmmaker Thomas Houston. Steel returns for a special podcast to discuss her role, running 33-minutes. Author Peter Bracke discusses his work on Crystal Lake Memories over 11-minutes. Compilation footage from horror conventions chats with fans. That’s clocking in under seven minutes. The second part of Lost Tales from Camp Blood features next, followed by a promo gallery, with stills, posters, radio spots, and trailers – even including the Japanese trailer.

The reason to snag this disc though is the uncensored footage, finally discovered on a VHS after decades of searching. They lack sound, but add significant brutality to each kill, lingering on stabbings and throat slices. In total, they last a little beyond four minutes.

Introducing adult Jason Vorhees to the world, Friday the 13th: Part 2 is aimless and illogical slaughter without a plot.

The 15 unaltered images below represent the Blu-ray. For an additional 34 Friday the 13th Part 2 screenshots, early access to all screens (plus the 120,000+ already in our library), 120 exclusive 4K UHD reviews, and more, subscribe on Patreon.