Friday the 13th’s genesis comes from Halloween; the formula isn’t changed between those two, but Friday the 13th, at least underneath the gory murders, owes much to Psycho.

No, it’s not Hitchcock verbatim (or even close), but Friday the 13th’s violent exploitation begins at the same point – a killer seeking to preserve purity in a country nudging its way toward embracing sexuality. The town near Camp Crystal Lake hides from its past, burying a story about two camp counselors ignoring a small boy drowning while they screw in a loft. There’s a sense this average, stuck-in-time town – complete with a Normal Rockwell-esque diner – doesn’t want to say the quiet part loud: The murders were justified.

Forty years on, it’s known the killer isn’t Jason Vorhees, but his maniacal mother (Betsy Palmer) who stabs and hacks at the new counselors because they dared to have sex or play strip Monopoly. That’s a death sentence, served up because they marred an American institution, the summer camp.

The setting is genuine, clever, and smart. Rated R, Friday the 13th aimed at older teens who already spent time as grade schoolers in camp. Vorhees didn’t enter the pop culture pantheon only through that audience though. Same with any slasher. But where Michael Meyers invaded a generic suburbia, Vorhees marched on a seemingly safe, pure place. Never mind it’s often kids supervising kids. A few years earlier, Meatballs played up the absurdity. Friday the 13th shredded that veil.

Follow-up sequels retreated the same territory, only then, the now dead Mrs. Vorheees was replaced by a hulking Jason. While better for the splatter, there’s far less innocence to Jason whose madness is disconnected from his death. Mother Vorhees, in her unassuming sweater and psychosis, is fear-inducing because she’s an atypical killer. An undead, possessed, testosterone driven male sticks to genre cliches; Friday the 13th succeeds because the brutality comes at the hand of a middle aged woman fit to be a school teacher. It’s a mother who feels validated in her insanity.

Most of these genre efforts throughout the ‘80s, fueled by an audience left unbothered by the repetition, staged wars between teens and killers. Sex sells, so that’s what producers sold. Few were thematically interesting, drawing on escalating real world violent crime rates to find value, but Friday the 13th uses its artlessness to expose inane conservative logic, as if scaring kids with knives could ever dampen hormones. 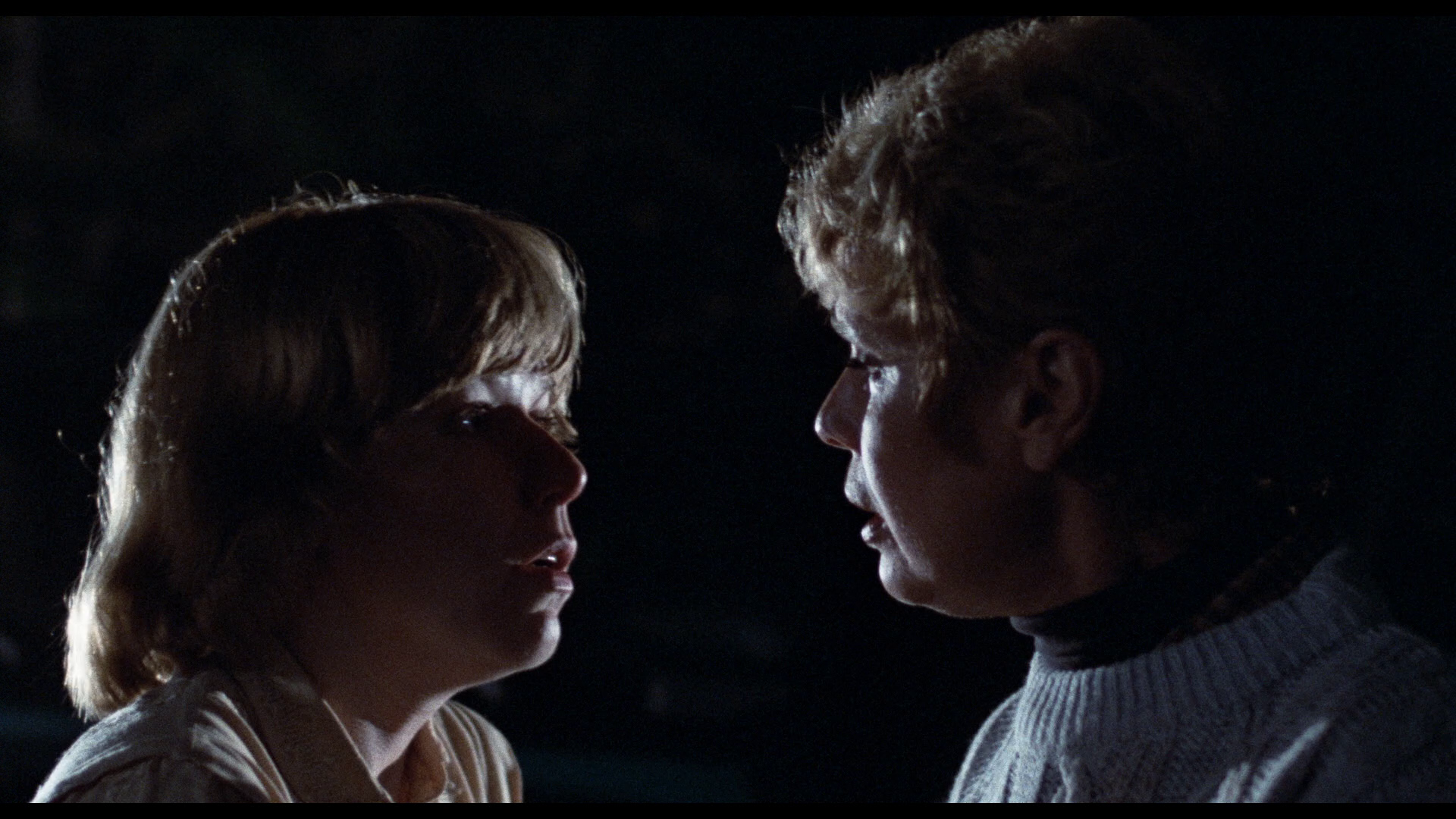 Scream Factory debuts a new 4K scan for this release, so it’s a shame this isn’t actually on UHD. Certainly, Friday the 13th looks ready. The untouched environments, trees, and buildings look ridiculously clean. Impeccable sharpness preserves this source at high resolution, leaving no question as to whether this is a true 4K scan.

Grain naturally rises in the dark, posing no issue to the encode even during the heaviest spikes. Organic texture thrives, and while the cinematography doesn’t always cooperate, when in sync, this is top-end material for ‘80s era, lower budget filmmaking.

Shadows demand precision, given as much on the disc. Image depth and density look exceptional. In the early going, brightness splashes onto the screen. Contrast is controlled, but rich. That equals color, pumping in primaries and thankfully without any notable digital grading bringing them down. Saturation hits a high point, making rain coats and camping equipment shine. There’s no bleed, only attractive hues.

Either mono or 5.1, and other than for purists, the surround mix wins. Extensions into the low-end drive the score. Pure bass never sounds artificial, emboldening excellent musical accompaniment. Screeching violins – also akin to Psycho – maintain fidelity.

Dialog runs drier, lacking the same clarity but that’s not unusual given the age. Delicate channel separation tracks cars as they pan, plus adding to rain effects. This in addition to the score’s wide stretch.

Both theatrical and unrated cuts come inside the case on separate discs. The theatrical bonuses focus on promotional materials, from trailers, to poster galleries, and radio spots. Everything else is over on the unrated disc, beginning with Sean Cunningham’s commentary, where he’s joined by cast and crew. For the first featurette, Fresh Cuts explores Friday the 13th’s origins over 14-minutes. Cunningham earns nine minutes to discuss his involvement in the next extra. A 2008 convention reunion lasts near 17-minutes. The first part of a short film, Tales from Camp Blood, begins here and runs through the sequels.

Friday the 13th unapologetically borrows from Halloween’s success, but adds a careful, well considered angle to differentiate itself.

The 15 unaltered images below represent the Blu-ray. For an additional 31 Friday the 13th screenshots, early access to all screens (plus the 120,000+ already in our library), 120 exclusive 4K UHD reviews, and more, subscribe on Patreon.