Abs. So Many Abs.

At one point in 300, a Spartan soldier spears a charging rhino. After that, joined together, the Spartan army pushes elephants off a cliff.

There’s a historical basis for 300, but as with stories this ancient, intervening centuries dabble with distorted facts, imbuing them with fiction. There’s plenty in 300, freshly stylized if beholden to its graphic novel source in inspiration. Criticize the comic framing for being so endeared to another medium, but that’s the point – 300 casts men as chest puffing, war gods, often mythical, framed as to invoke religious symbology. 300 paints soldiers demanding freedom as pure, relentless, and ultimately, heroes.

Author Frank Miller published the story in 1998, and in finding a movie audience back in 2006, still fresh post-9/11 anger remained. Raised from birth to fight, employing eugenics to select prime warriors, and battling a Middle Eastern foe, 300’s vicious streak stands less for some fabricated purity of war than it does a nationalist fervor where soldiers see their righteousness as a birthright. Never is 300 critical of the process, only celebratory of the results.

“No room for softness,” speaks the narrator when describing Sparta. It’s an almost outlandishly masculine, brutish nation. When a nearby country seeks to join in the war, they’re made to be cowards because they practice pottery or art, this despite willingly holding spears to protect their own. It’s demonizing to anyone not committed – in total – to bloodshed. Hence, anyone not shoving elephants to their deaths lack the necessary willpower.

Politicians bicker over war; the soldiers willfully disobey and fight anyway because it’s all they know. 300 draws a parallel to the fervor felt in the US when that terror alert level bounced between upper-end extremes during evening newscasts. With such a heated national temperature, 300 felt right for mass consumption, much like The Matrix embraced a disruptive turn into a technological millennium. Some movies nail a moment; 300 was one of those.

It’s hard to see past the tiresome parodies and memes brought on by 300, many still circulating. Director Zack Snyder recycled the aesthetic in future works too. 300 isn’t without visual bravado, and the violence so gruesomely raw, few matched the spectacle since. But also consider what 300 represents, what real world circumstances it fed on, and why popularity resulted. It’s presenting a military state, seen as marginalized, but invulnerable when charging toward their cause. The cost is their lives, spread out on a beach like a religious mural, but their sacrifice breeds victory and freedom. History happens cyclically, and 300 is proof. 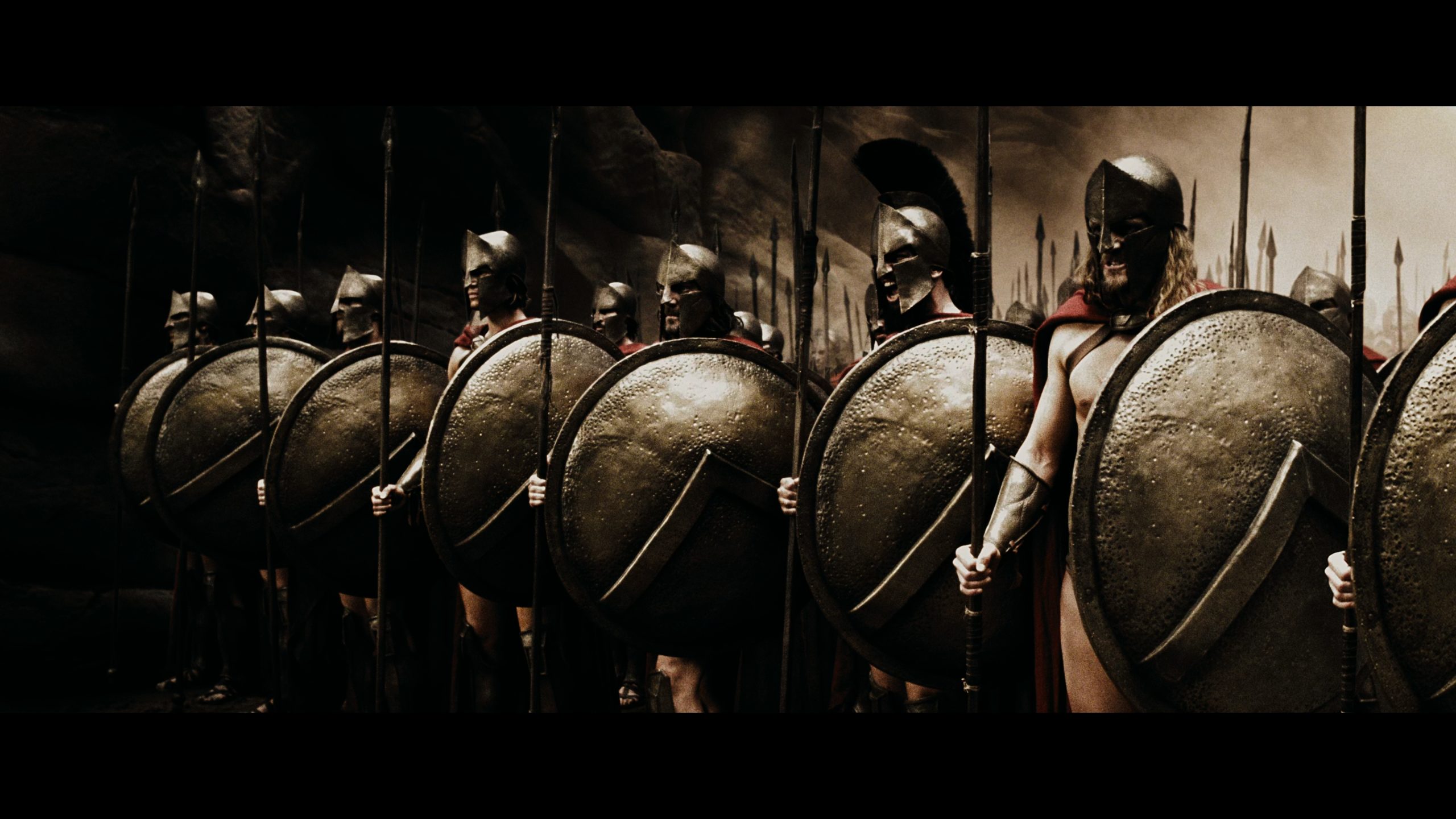 There’s much to say about 300’s visual flair. It’s notable for grit, extreme color grading, and ultra contrast-y images. Warner’s 4K release emboldens this all, and things like white clipping happen at the source. The HDR pass merely adds a blinding grade to them. Importantly, there’s better depth in shadows. Watch as Leonidas visits the Ephors, their faces mostly covered by hoods, yet their head’s silhouette preserved from the dark. No crush, just dimension added.

Encoding leaves some noise behind. Chroma artifacts and blocking do happen. The thick sepia tint mixed with sand and dust provides a space all too inviting. Ultimately, it’s minor. Warner gives the disc more than enough space, so until compression algorithms advance, there’s little more to do.

At times, the mid-2000s CG drops resolution, or requires a digital smeariness to mesh, which thanks to 4K, becomes apparent. Otherwise, this upscale brings significant definition, drawing out stellar prop work on helmet and shields. Facial texture enriches the intensity needed, and it’s convincing enough to be a true 4K source at those peaks. There’s definite cause to upgrade.

Remixed for Atmos, this is what the sound tech calls for – fantastic channel separation, rich overhead use, and boomy low-end. 300 checks all those boxes, and the only complaint being the score often taking precedence over physical action. Throbbing, dominant war drums take over, pushing range to a satisfying, rumbly maximum. Certainly, clashing shields and other slamming impacts reach a tight LFE point.

Arrow clouds sweep into the heights, then fall in a sensational, in-the-moment act of audio design. Blood splatters into positional speakers, thunder rolls front to back in a stellar reverb, and there’s even ambiance while seagulls caw in the heights. Rock slides bring equally exceptional touches, and sword fights precise accuracy.

On the UHD itself, Warner includes the Blu-ray commentary from Zack Snyder, co-writer Kurt Johnstad, and director of photography Larry Fong. On the included Blu-ray, Warner changes nothing – it’s the same disc they initially released all those years ago (in tech terms anyway). Thirty-eight minutes of webisodes follow the production. A discussion on the real story compared to the film runs 24-minutes. A brief feature on Spartan society makes it a little past four-minutes.

Early test footage reaches near seven-minutes. A chat about Frank Miller hits 15-minutes, followed with an EPK making of, a sped up look at all stages of production runs nearly four-minutes, and deleted scenes (along with Snyder intros) passing three-minutes.