For all of the violence in California’s inner city gang culture, there’s someone willing to go further. Tax Collector bills Shia LaBeouf as a remorseless killer, an unconvincing role, but one where he shows no emotion in holding a gun to someone’s head. It seems he finds glee in the opportunities when drug runners don’t pay. Then comes Jose Conejo Martin, who treats murder like a religion. A threat to dunk kids in acid comes from his mouth casually; likely, it wasn’t the first time he made such a statement.

In exploring this cruel, inner city mafia regime, director David Ayers makes explicit the cause and effect. Morals rarely matter. Loyalty extends only as far as the next kingpin lets it.

Tax Collector doesn’t produce any depth though. There’s no sense of where LaBeouf came from, or how impoverished urbanity creates such a callous character. An arc with star Bobby Soto considers a man resistant to slaughter, bound to family, willing to disrupt a cycle. Yet his empathy leads to a gruesome, unflinching finale laced with torture and brutality. Maybe this all ends afterward; Tax Collector doesn’t make that clear in its final emotional draw.

Ayers frequently references his upbringing in dramas like Street Kings or End of Watch, but Tax Collector doesn’t approach this material for anything other than its in-movie cool. Flashy clothes, cash piles, fancy gunplay – it’s par, and centered around the Latinx culture, only draws on racial stereotypes. And again, portrayed without commentary on why these communities fall. One theory? Films like Tax Collector, turning its protagonist into a confident archetype, embedding already overused tropes.

Worse, Tax Collector bores. It’s slow, its action mundane, and the scale limited. Much is asked of Soto, if not until the last act when his story turns. Before, it’s plodding and routine, only making the dramatization worse in this context because Tax Collector spends time building gangland anti-heroes. The world around them appears grimy, littered with graffiti and poverty, yet with no exploration of that place away from these main characters. It’s merely somewhere for them to exist, and as much as Ayers tries bringing his own experiences into works like this, Tax Collector treats that more like window dressing than anything thematically relevant. 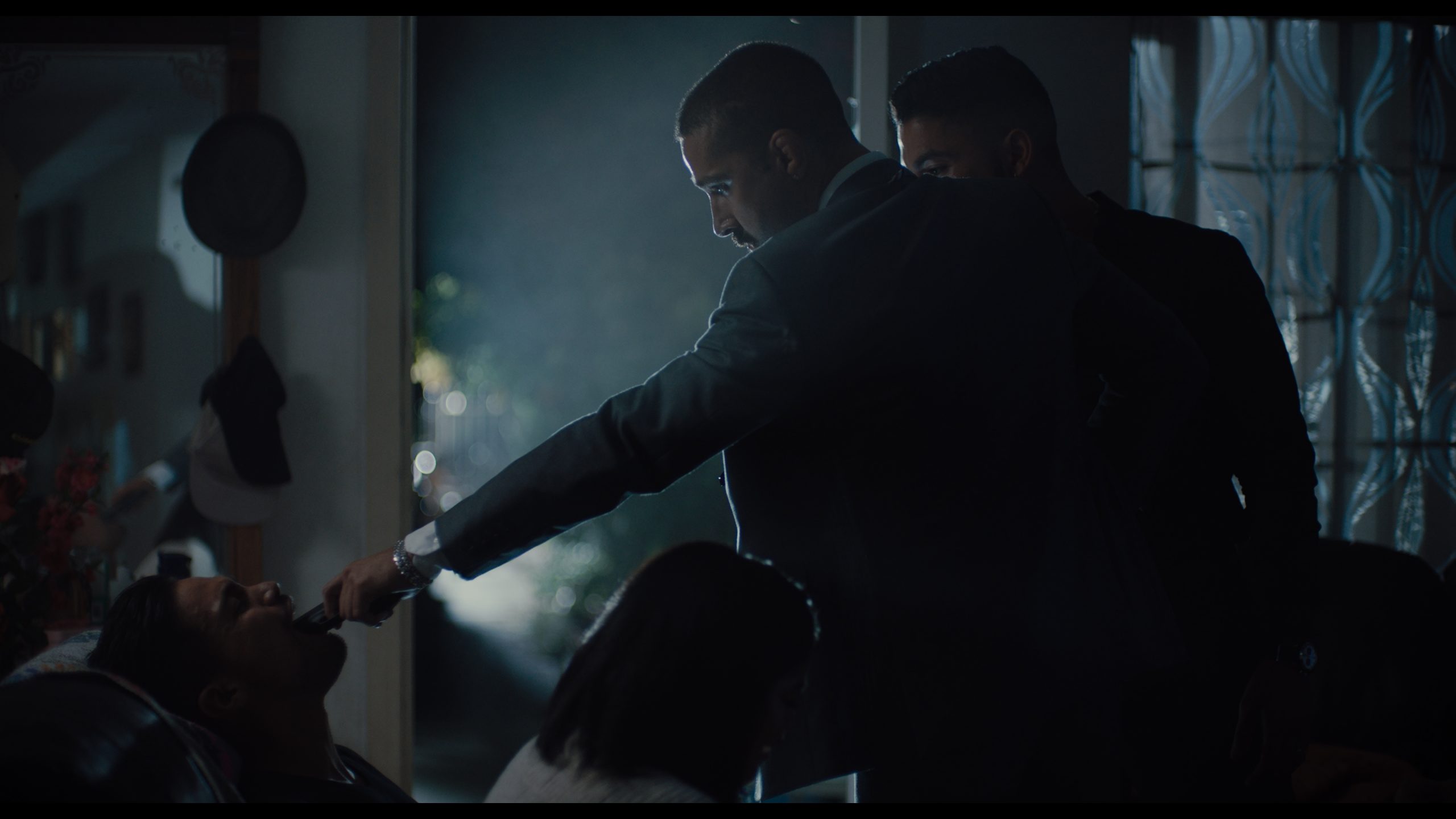 Par for RLJ, the 4K release lacks HDR encoding. Cinematography leans on bright highlights and imagery, so that’s a shame, although Tax Collector does excel anyway. Black levels stick to a softer depth, hazy and dry for effect. Certain aerial views at night do drive some stellar pure black though.

Choosing a primarily warm palette, oranges dominate. Primaries rarely escape outside of blood and occasional clothing. There’s nothing exciting in the color, but the disc represents the aesthetic choices well.

Pedestrian DTS-HD moderately excites the low-end when it comes to gunfire. Each shot drops to extend range, also shown off alongside the soundtrack selections. When subwoofers in-movie blare, so too do they at home.

Passe surround mixing handles standard shoot-outs on a definite budget. Debris and bullet strikes ping around stereos and rears. Ambiance in clubs or parties flares, if only slightly. Competent, but mundane.