Given how deeply ‘90s Mallrats is, it’s surprising there isn’t a Pog store somewhere on the mall’s second floor. The otherwise complete time capsule involves grunge, Magic Eye puzzles, Sega, and… a mall.

Writer/director Kevin Smith based his story on ‘80s high school comedies – Fast Times, Sixteen Candles, Ferris Bueller. Some of that comes through Mallrats, a story about rebellious teens, romance, and low-key high school culture. Updated for a different decade, Mallrats increases the abrasiveness, opens up sexually, and lays on thick geek culture.

What Mallrats offers now is an uncomfortable time capsule…

In 2020, this is the era where women seek representation in comics; Mallrats opens with art akin to disfiguring the female form to exaggerate their breasts – anything to distort and appeal to a singular demographic. That’s Mallrats as a whole, using Shannen Doherty and Claire Forlani to prop up the male leads.

At times, Mallrats succeeds in its humor. Ethan Suplee’s obsessive bit part gives a running gag worthy of taking to the end. Jason Lee’s concern over a kid on an escalator pays off. But then there’s 15-year-old Tricia (Renee Humphrey), doing “research” on the male sexual drive, and that research involves sleeping with men of all ages. Given the overt testosterone covering Mallrats, that’s more grotesque than on its own, and not (at all) the comedy Mallrats thinks it is. When in the end Lee uses her to defeat the villainous Ben Affleck, it’s hypocritical, as if Lee sits on higher moral ground.

What Mallrats offers now is an uncomfortable time capsule, underneath the musical and shopping nostalgia in the foreground. At no point is Mallrats untrue to the time, yet it’s also no wonder why comic/geek culture took so long to even consider accepting women into their ranks – and mostly, they still don’t. Mallrats plays like a trophy for them, that the right thing to do is to chase and harass, defying empathy and employing alpha male narcissism. Revisiting Mallrats is like trying to endure Revenge of the Nerds now – both films deal in the same tropes, and unknown to the target audiences at the time (and in some cases, now too), only perpetuated their worst behavior. 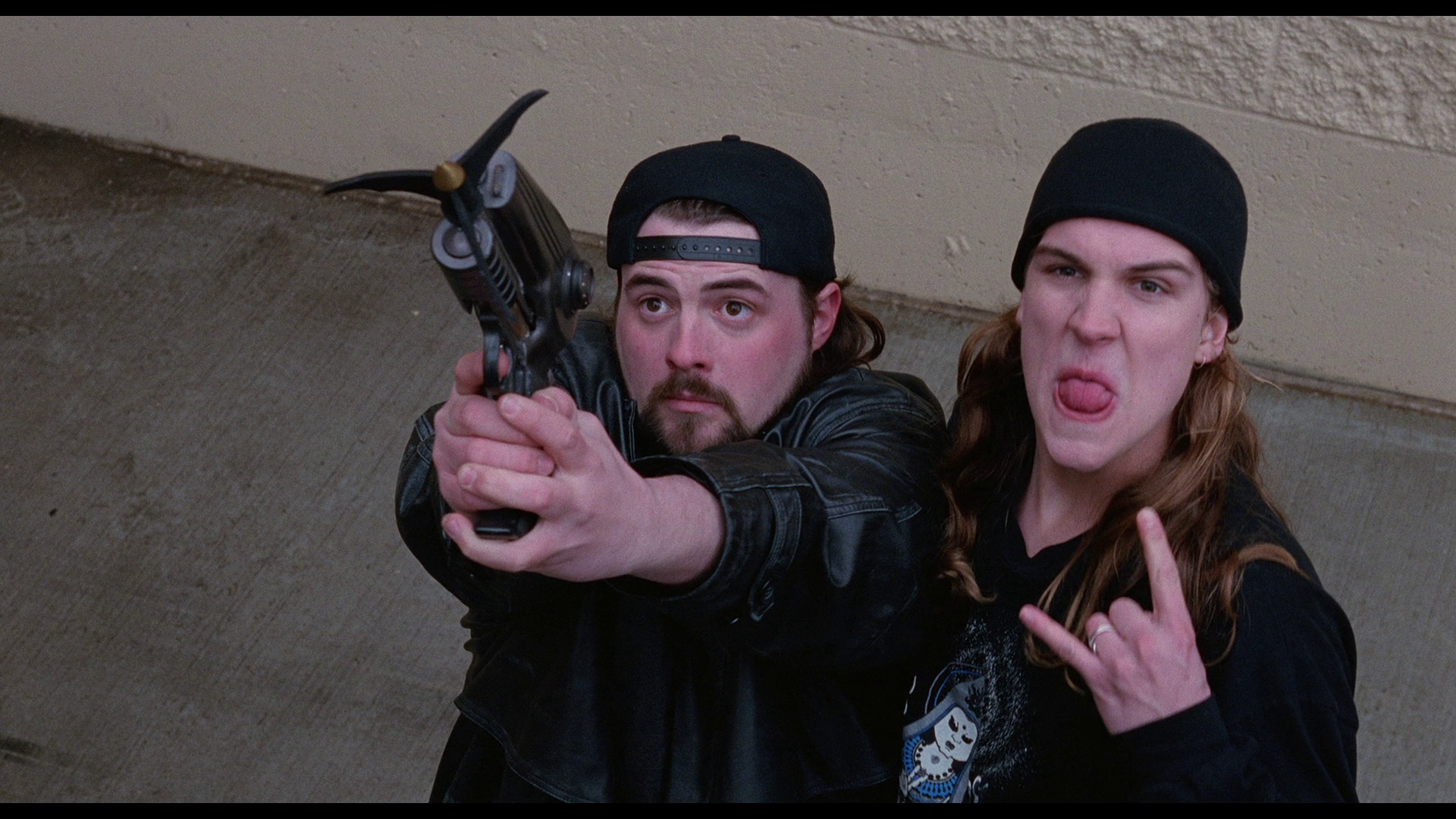 Arrow brings a new Mallrats master to Blu-ray. While slight – super slight – sharpening seems applied (noticed during wide/long shots), this is gorgeous. Resolution peaks and doesn’t fall off. Image detail pours out, splendidly resolving facial definition and other textures. Via this disc, all of the posters and other references readily show as the camera pans around Lee’s bedroom.

Fantastic color saturation matches the ‘90s era neon adorning the theatrical poster art. Of course, it’s not that rich on disc, still within reason and natural, but elevated to bring out primaries. The finale’s hot pink set layers on the boldness. Accurate flesh tones hold firm.

There’s not much here for this mix to handle other than the soundtrack, and for that, the included stereo track is more precise. Otherwise, the DTS-HD 5.1 offering brings better spacing, nicely spreading out crowd sounds, and elevating ambiance while around the mall. When someone falls during the stage construction, those screams happen in the rear right; that’s accurate.

Fair range lets the music breathe a bit, the score included. A least a little density in the low-end slips through.

Jammed onto two discs, Arrow offers three different cuts – theatrical, extended, and the TV edit. The original and TV versions offer new intros from Kevin Smith, and he’s fantastic, even inspiring in his message. Usually director intros amount to fluff, but Smith spends 12-minutes on one. He’s then on a commentary track too, an older one that includes Ben Affleck and others. Again Smith appears for an interview, taking 30-minutes to look back on the production, then spending another 13-minutes remembering producer Jim Jacks.

Jason Mewes spends 10-minutes with his new interview. In a clever way to present things in the COVID era, Arrow loosely animates a compilation of crew interviews to keep them visually lively. David Klein, cinematographer, steps in for six minutes in another piece. Arrow then brings in the 10th anniversary DVD extras, beginning with deleted scenes running an hour. Raw set footage and outtakes make it to eight minutes. EPK cast interviews, an anniversary Q&A, and 22-minute retrospective featurette precede trailers and music videos.

The second disc holds the extended and TV editions. Two hours (!) of dailies follow, preserved only on a heavily degraded VHS unfortunately. Still, comics, and soundtrack promo finish off a perfect bonus section.

There was a time when Mallrats made sense, but only serves to expose toxic thinking that doesn’t help the culture it supports.

The 15 unaltered images below represent the Blu-ray. For an additional 28 Mallrats screenshots, early access to all screens (plus the 120,000+ already in our library), 120 exclusive 4K UHD reviews, and more, subscribe on Patreon.