Beloved children’s icon Thomas the Tank Engine takes on the wicked Diesel #10 in Thomas and the Magic Railroad. Originally based on a series of books which became a massive hit on television, the lovable steam engine hits the big screen for the first time in this mostly pleasing cinematic outing starring Peter Fonda and Alec Baldwin.

Helmed by director and writer Britt Allcroft, the 2000 movie landed with a thud at the box office. Fondly enjoyable for its primary audience, young boys and girls who had grown up with the popular television show.

Poorly received by critics, mixing live-action with the Island of Sodor’s magical trains resonated with a generation of young children desperate to see Thomas and friends go on feel-good adventures. The friendly steam engines with vaguely British accents find themselves in trouble when Mr. Conductor’s supply of magical gold dust runs out.

On her way to see her Grandpa Burnett Stone, young Lily gets on the wrong train and ends up at the Shining Time Station. She meets Mr. Conductor, the miniature man who shows her a railway where the plucky steam engine Thomas pulls the line from the enchanted town of Shining Time to the island of Sodor. Dealing with Burnett’s sadness is a major issue as the plot moves along.

While adults will find the sloppy story and bizarre sub-plots daffy, it works for the movie’s intended audience. Mr. Conductor (Alec Baldwin) teams up with Lily (Mara Wilson) to help out her grandfather (Peter Fonda) and save Thomas’ friends. The oddly melancholic premise and happy-go-lucky slapstick, not to mention cheerful characters, is often a confused jumble of scenes stitched together.

Baldwin gives it his college best but the actor was cast here for his star power. He’s not a great fit for the role. Fonda goes through the motions as he cashes his paycheck. The brightest light in the cast is young actress Mara Wilson, bringing a positive spirit and energy.

Director Britt Allcroft originally fashioned a much sadder tale, which scored poorly with test audiences. Executives demanded changes before release so the movie was restructured and a major sub-plot was removed entirely. That explains the haphazard and occasionally silly plotting. Children should enjoy the basic adventure elements without fuss.

Thomas and the Magic Railroad isn’t great filmmaking but the simply joy of seeing your favorite character on screen in wacky adventures makes it enjoyable fodder for young fans. 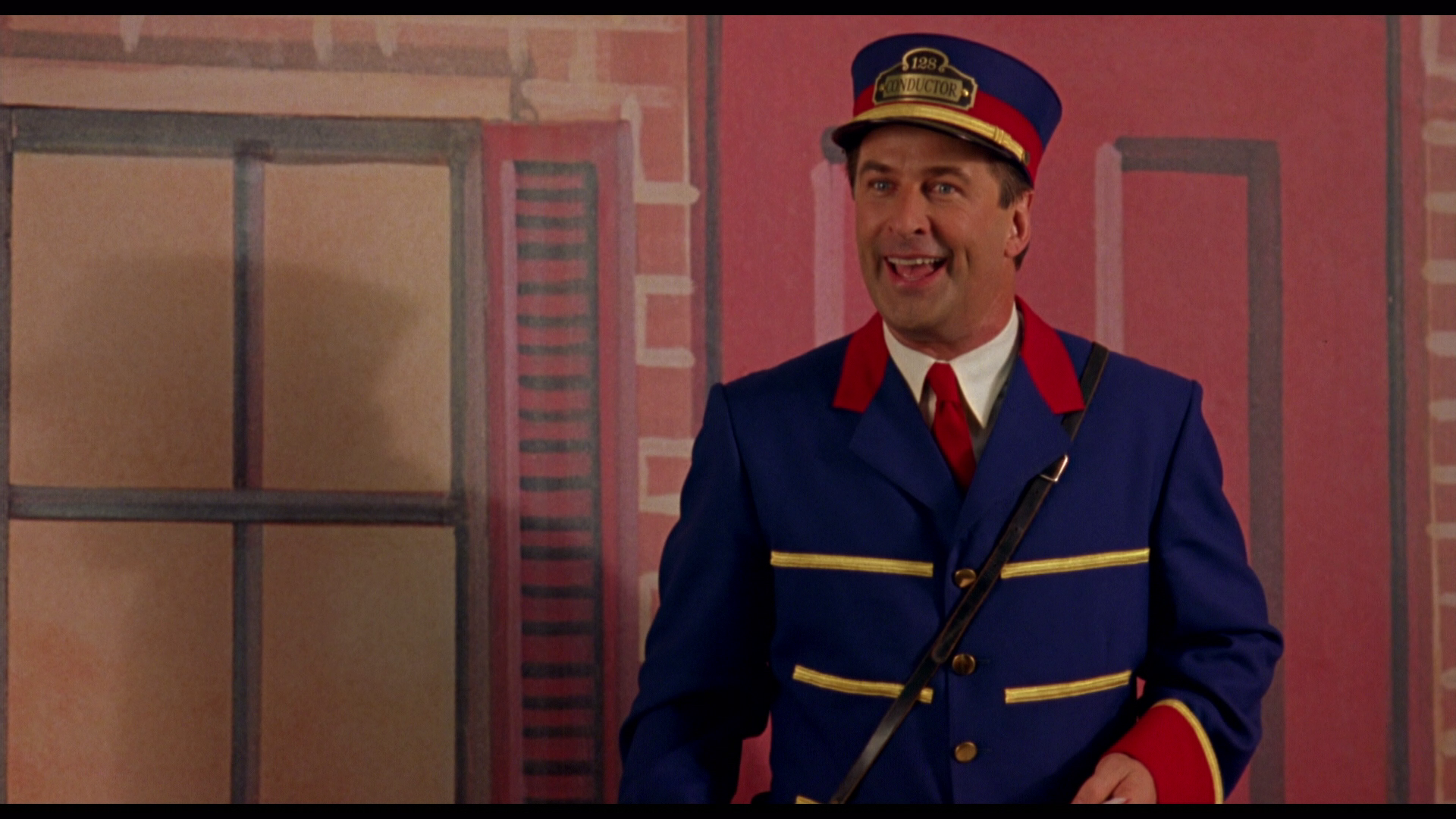 Originally released in 2000, Thomas and the Magic Railroad hits BD for the first time from Shout Factory. Originally released on DVD years ago by Sony in a butchered open-matte presentation, the movie is shown here in its proper 1.85:1 aspect ratio.

Elements are in satisfactory condition but this film transfer isn’t particularly fresh. It’s clearly an older, dated scan from years ago. The visual effects look dull. The scenes with Peter Fonda seem to have been better lit and filmed, showing improved contrast and more lively flesh-tones. This isn’t videophile fare, the movie was made before the era when digital intermediates became common as normal procedure.

The main feature runs 85 minutes on a BD-50, encoded in transparent AVC. The 1080P video is soft. The film-like grain structure is unmolested and reasonably natural. Detail is serviceable with adequate definition. Decent enough picture quality in HD for nostalgia seekers but still somewhat limited.

The original surround track is presented in fine 5.1 DTS-HD MA. The front soundstage offers solid presence and imaging. The surround mix is fairly basic with reasonable separation for the moving train effects. There isn’t much bass, if any. Dialogue is mixed loudly in relationship to background audio cues. Children should be entertained and the occasional bit of singing is heard in outstanding fidelity.

Shout Factory spruces up this 20th Anniversary edition with plentiful bonus features, including a look at the deleted material that didn’t test well with audiences in the original director’s cut. New interviews with director Britt Allcroft, Alec Baldwin, and Mara Wilson are an unexpected addition. While a simple children’s movie, Shout treats it like an Academy Award winner with this well-rounded set.

The Blu-ray and DVD combo set doesn’t seem to include a slipcover. There’s no real reason to hold on to Sony’s original DVD version anymore unless you need its Spanish dub. The Blu-ray is coded for Region A.

Return To Shining Time Part 1: As Precious As Gold (08:42 in HD) – The first part of the two-part documentary featuring writer/director/producer Britt Allcroft. She goes into her work history and her vision for Thomas The Tank Engine from its earliest days on the screen.

Return To Shining Time Part 2: Unfinished Business (25:31 in HD) – The second part has Allcroft detailing the cast choices and the poor test screening that led to her original cut getting completely altered for the theater. Deleted footage, archival interviews and other clips comprise this well-made documentary.

Behind The Scenes Reel (11:29 in upscaled SD) – Original footage from the production shows how Thomas and friends were brought to life on the screen. Cast and crew are shown working together in glimpses between takes.

Deleted Storylines (60:17 in HD/SD) – Shout has combined storyboards, deleted footage and actual scenes from the final cut to re-create most of Allcroft’s original vision for the movie. Poor audience tests for the darker tale had executives cut out an entire character from the movie – P.T. Boomer. Boomer was intended to be an antagonist for Fonda’s Burnett Stone. This would have been a very different movie and Lily’s role would have expanded. The alternate opening here makes far more sense than the theatrical cut’s opening.

“Hello Mr. Conductor” – Interview With Alec Baldwin (09:32 in HD) – Baldwin discusses his appearance working on Shining Time Station and how he later ended up on the movie version.

“Finding Your Sparkle” – Interview With Mara Wilson (09:37 in HD) – An audio interview with the now grown actress that played Lily. Having lost her mother just before filming, she fondly recalls working with Baldwin and Allcroft.

“There’s Something About This Place” – Interview With Didi Conn (09:27 in HD) – The actress talks about her gig on Shining Time Station and the movie’s influence.

“The Sounds Of Sodor” – Interview With Composer Hummie Mann (08:33 in HD) – An audio interview with the composer detailing his challenges scoring the movie.

Deleted Scene (00:28 in SD) – Pulled from the original DVD release, this is a short scene known as the Sundae Surprise.

Thomas And The Magic Railroad Theatrical Trailer (01:56 in HD)

Thomas and the Magic Railroad

Thomas the Tank Engine roars to life in his first big screen adventure with Alec Baldwin and Peter Fonda lending a hand.

The 15 unaltered images below represent the Blu-ray. For an additional 30 Thomas and the Magic Railroad screenshots, early access to all screens (plus the 120,000+ already in our library), 100 exclusive 4K UHD reviews, and more, subscribe on Patreon.