Sex and money make the world turn. Or, in Psycho’s case, bring it to a standstill.

The sixties represented a colossal cultural change for America. Civil rights, certainly, but also a shedding of puritan values that locked away and oppressed sexuality. Right as the decade turned came Psycho, unabashedly rejecting prior norms. The film comes into focus on an afternoon, per-marital lunch fling. It’s shocking and audacious, or it was; Psycho began unraveling a culture so cautious as to never show men and women sleeping in the same bed. Janet Leigh’s first appearance in Psycho shows her shirtless and smothered by a divorced man.

Leigh becomes a fixation to Norman Bates (Anthony Perkins), not for her crime of stealing $40,000 from her employer, but because she cannot hide her sexuality. Maybe Bates senses it. Maybe she sends invisible signals.

Bates grew up in the ‘50s. Late in Psycho, there’s a tour of his bedroom, stocked with tin toys and plush bears, all undoubtedly copyrighted circa 1950. Things were perfect, serene. Sex ruined him though. Money woes don’t help, but those woes stem from his mother’s affair. Under such tightly wound and restrictive values, nothing seemed worse than “impurity.” Bates isn’t a violent misogynist, but someone split between natural instinct and those feelings he was told to suppress. No wonder he’s confused.

Hitchcock frequently approached sexuality indirectly on screen. Rear Window dealt with lust on the side. Vertigo asked to be a thriller, and instead, engaged directly with infatuation and desire. Psycho is the logical evolution, a story concerning what some saw as a moral erosion, leading to a graphic, lurid punishment by Bates’ hand.

The manic cuts defining the grueling shower murder acts out with intense violence, each strike a callous, vicious call for obsolete standards of dignity. Breaking those rules demands discipline, but in such a twisted mind (one distorted by outmoded beliefs) murder is fair retribution. Shattering ingrained norms never happens easily – gender and race equality still give political campaigns fodder. Psycho though made Puritanical, prohibitive measures visible, and in a ghastly, unforgettable way. It’s such an unseemly, shadowy movie, where people too often hide out of view. Society is always looking, judging, staring.

Even in the end, Bates sits alone, forced to consider his crimes, but he can only smile. It’s his duty to stop normalization, keep the country pure. Mother wouldn’t have it any other way. 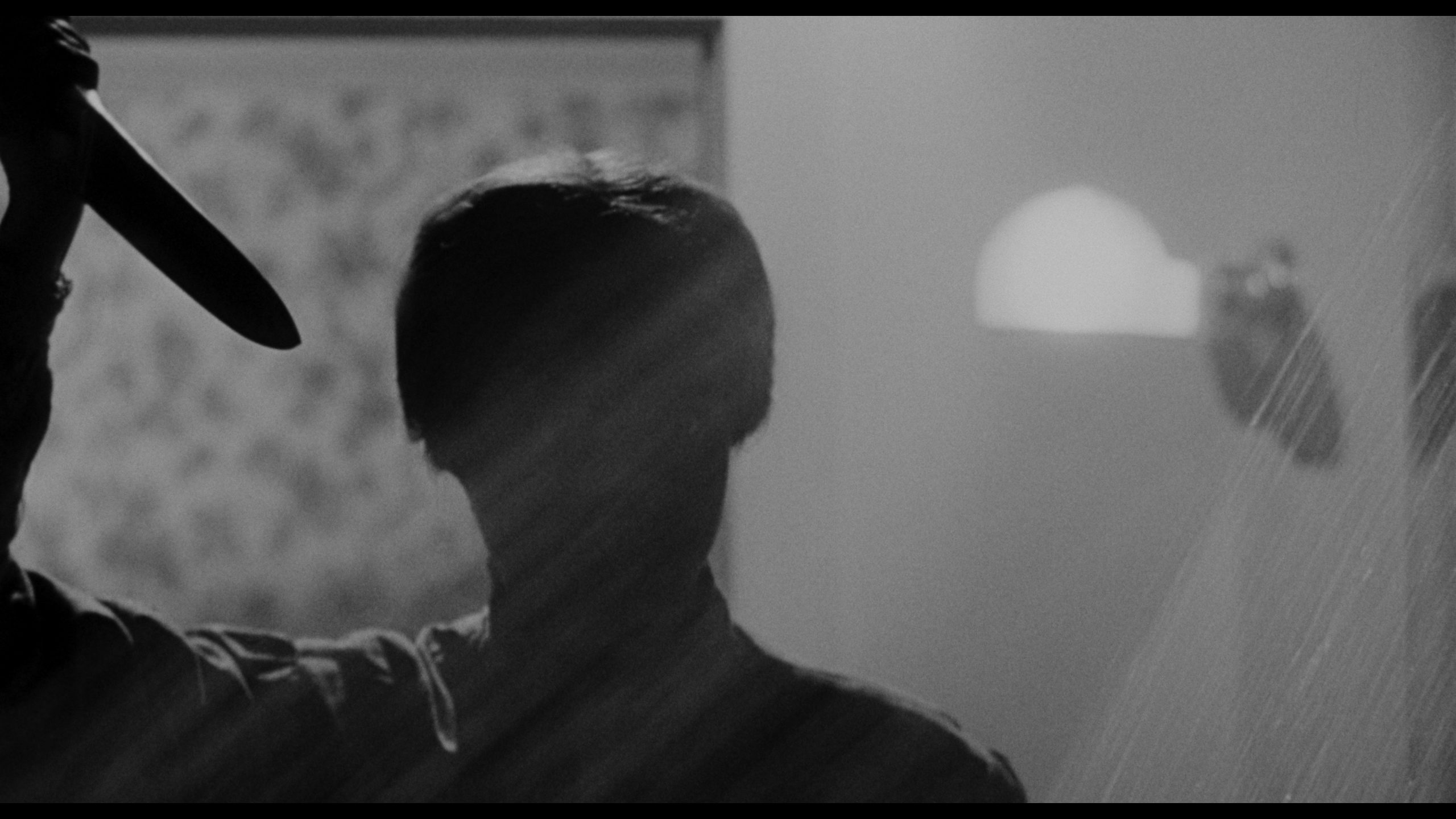 Thankfully remastered after a thickly DNR’d Blu-ray prior, Psycho looks spectacular in this newly minted 4K presentation. Inconsistencies happen only at the source, and most of the runtime displays an impeccable grain structure. Flawless encoding manages any spikes (and they do happen), maintaining absolute clarity at its purest levels.

Immense texture and sharpness resolve facial definition en masse, gloriously pure, and revealing details never visible in prior home releases. Exteriors showing the Bates’ home capture every nuance on that building and exterior lot. Tight facial detail occurs in close and further back. It’s marvelous to see, and no less astonishing for a 60-year-old movie, even as other masters produce similar spotless results.

HDR helps gradients thrive, a masterwork of gray scale. It’s perfection. Importantly, it’s not a transfer seeking to astound with intense, high NIT levels. Headlights on passing cars and an occasional chrome reflection take advantage, but mostly it’s reserved as to not disturb the cinematography.

Controversy: Universal includes what they note is the original mono audio. That is incorrect. Instead, it’s a downmix of the new DTS:X track, which includes some altered effects, including added rain/shower sounds.

To their credit, the remix does subtly involve the full soundstage. Bernard Herrmann’s brilliant score takes over the fronts, sweeping through to the rears. Cars passing on the street next to the used car lot do so in the rears. Rain splashes overhead, and in the shower, water falls into every speaker. It’s involving, if not true to the original source.

Extras copy from previous releases, but feature the (optional) addition of an uncensored cut, available in the US for the first time since its original theatrical exhibition.

A 26-part making-of runs over 90-minutes, tackling any pressing issue with regards to pre-production, shooting, and post. It’s fantastic. Psycho Sound takes viewers into the mixing booth, where you can learn how they added the rain effects that detract rather than add to the movie. In the Master’s Shadow is all Hitchcock, discussing his influence from those who came after him. Some newsreel footage focuses on the premiere.

Hitchcock/Truffaut is a snippet of an audio interview conducted by filmmaker Francois Truffaut. The shower scene is presented with and without music, followed by storyboards of the sequence. Archives contains various photos, other contained in sections focused on publicity, lobby cards, behind-the-scenes, and production photos. A commentary from author Stephen Rebello comes last in the menus.

Psycho breaks with perceived norms circa the early 1960s, lashing out against a more open culture emerging from Puritan values.