In Space, No Can Give You a Lightbulb

Pitch Black’s title comes from its premise, where people-eating monsters scramble into the shadows, looking for a meal during a planetary eclipse. It’s also a name referencing tone. The script leans on cynicism and nihilism, the stranded crew stuck on a hostile world, and hating one another for it. Bleak, vicious, cruel; Pitch Black is not a film with a respectful worldview.

Released in early 2000, Pitch Black unknowingly existed on a fringe – a little over a year later, Keith David’s friendly, caring Muslim character would evaporate from American cinema. David’s sketchy accent aside, Pitch Black engages in differing ideologies, a thematically interesting backdrop for the survival story’s in-fighting. Policing versus the accused, religion battling science, belief against… nothing.

Nervousness and dread can only sustain a story so long; Pitch Black never offers a release

Even in Pitch Black’s future, where space travel is a norm, people bring their earthly prejudices or bias. There’s an idealist view in which humanity colonizes another world, creating paradise because societal problems disappear. To Pitch Black, that’s ludicrous. The arguing doesn’t stop, even as creatures start catching their prey. When at their most heroic and caring, Vin Diesel, Radha Mitchell, David, and the rest, they all fail at showing empathy or understanding.

This unnamed planet swirls around two suns. The aesthetic leans on that, baking these characters in blinding heat, adding to the growing tensions. It’s effective. But Pitch Black ends there though. Rushed plans and mistrust soon turn repetitive. Nifty as the alien critters look, their attacks become routine.

A lot rides on Vin Diesel, an anti-hero outcast leftover from the ‘90s. A murderer, but cool. He sports glowing eyes and knows how to work a shiv. His anti-authority, anti-social stance allows him to resist Cole Hauser, the bounty hunter seeking to bring Diesel back alive. Rated R and delivering high-grade gore, Pitch Black feels more like a blast of teen angst, but instead of moping, Diesel uses it as motivation. This role brought Diesel to the public eye (after being smothered in Saving Private Ryan’s massive cast, or sitting behind Iron Giant’s animation), but it’s unlikely the breakout success could be duplicated today with this same cool against such gloom.

Hovering too near two hours, Pitch Black sends its pacing off a cliff. Nervousness and dread can only sustain a story so long; Pitch Black never offers a release. What’s engaging between these multi-cultural cast members falls apart once the action spikes (and brings overly limber, music video-like editing). It’s all about making Diesel look cool. 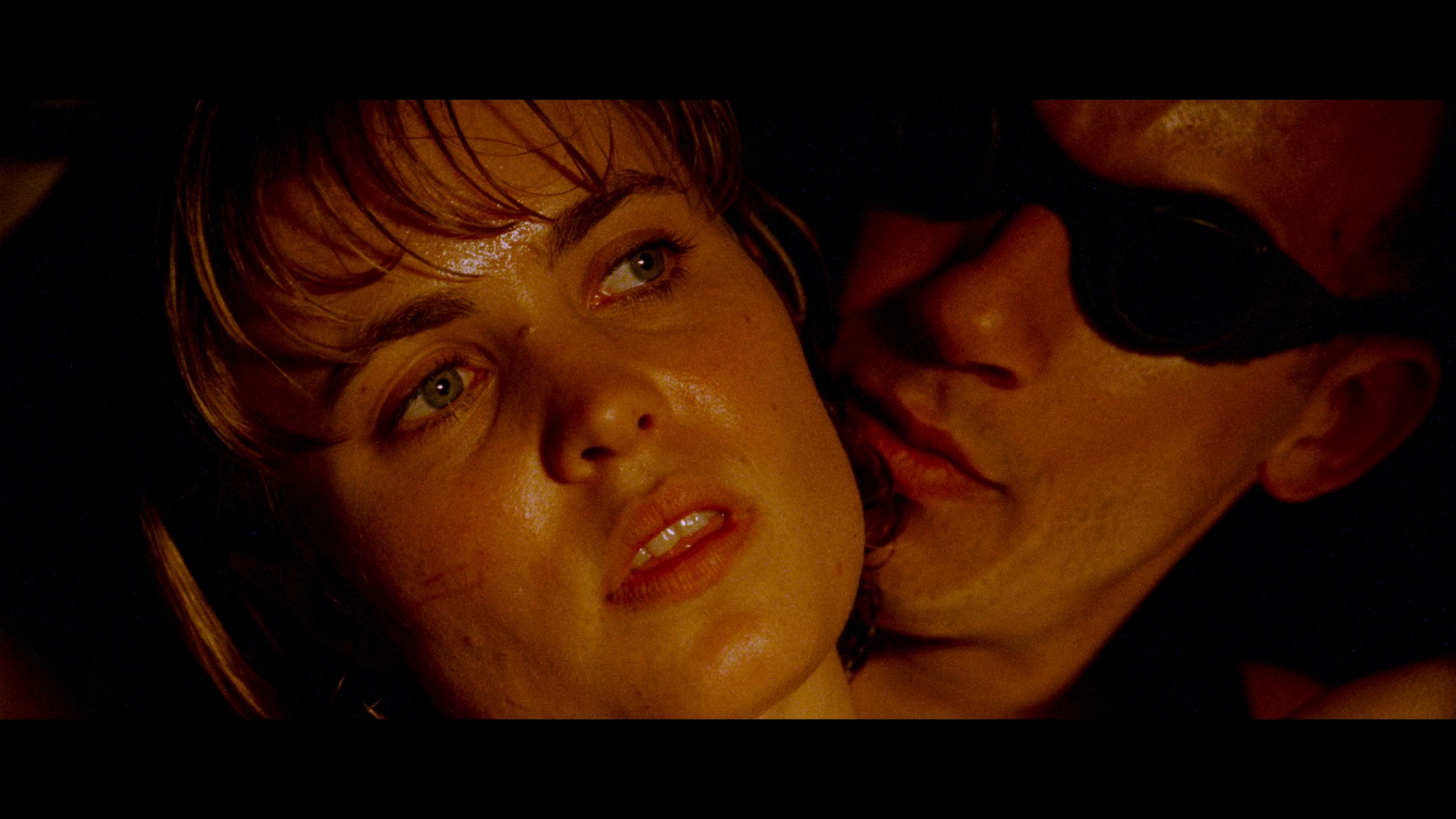 Arrow brings Pitch Black to 4K via a new scan, stellar in resolution. Tense close-ups show every pore, every bead of sweat, and any dirt. The texture is meticulous and consistent. Other than loss during digital effects (unavoidable), nothing is diminished due to time. Encoding keeps grain precise. Some specks and minor scratches mar the perfection, but never to any egregious tier.

Using the blackest blacks, Dolby Vision boosts the visible depth to marvelous levels. Dimensionality in the second half, after the eclipse, pushes the deepest possible shadows. Small black level reduction in the cinematography does introduce artifacts, grain filling the now visible space. It’s slightly distracting, if at the source. During the day, pushy contrast blows out detail, suggesting life under dueling suns. Pitch Black always looked like this, and in DV, the brightness gains additional intensity. It works.

This isn’t a movie flush with color. As an early digital grading example, the soft blues and thick oranges dominate, washing primaries away in the process. Some brilliant greens stem from lit flares, stunning in this new presentation. What’s here takes on new life thanks to the advancing tech.

Although calling for Atmos/DTS:X, Arrow recycles the DTS-HD 5.1 track. It’s a successful mix, one where creatures slither around, screeching across the soundstage. Ambient winds roll in, and rain splashes into each speaker. The accuracy remains a keen example of how mixing adds to a movie, and 20 years later, has few challengers on those terms.

Whiffing on low-end crunch though, Pitch Black only reaches sufficiency, but not the deepest tiers. As the ship enters atmosphere burn and skids on the surface, it’s listless. Noticeable, but listless. Range never stretches limits, and leaves this mix a little flat.

Director David Twohy provides two commentaries, one with the actors (Vin Diesel included), the other with the effects team. Those were available previously, but a 23-minute interview with Twohy is new to this release as the director looks back on the project. Five new interviews follow, beginning with Rhianna Griffith, then Claudia Black, cinematographer David Eggby, composer Graeme Reveli, and finally VE supervisor Peter Chiang. A short EPK feature runs almost five minutes, made at the time of Pitch Black’s release.

Eighteen minutes of behind-the-scenes and interview footage comes from a special edition DVD. Additional material of the same variety focuses on digital effects. Carry over materials from the 2004 DVD are included too. The half-hour animated sequel runs 34-minutes, and includes a few extras of its own. Some promo materials, an image gallery, and trailers round out this complete (and then some) bonus set.