Unsophisticated slop, joyously hokey, and creatively nonsensical, Flash Gordon rates as a near-perfect movie. It does almost nothing typically, yet it’s so sure of itself, so positive of its pop culture status, Flash Gordon never second guesses staging a sleepover-esque pillow fight between two grown women, is certain Sam Jones barking football plays can defeat evil, and totally, assuredly sees no issue in casting Max Von Sydow to play an Asian authoritarian with Germanic flourishes. There’s no singular description of Flash Gordon.

No question the production sought to sap Star Wars’-tier profits via these kooky sci-fi worlds and anti-fascist rebellion story. Yet rather than understand the appeal of a no-named farmboy rising against galactic tyranny, Flash (Sam Jones) stands as the muscular, all-American, starting QB of the New York Jets. Mistaking Star Wars’ lived in, worn look as too grim, Flash Gordon turns its world into a bedazzled Wizard of Oz, Munchkins and all (but now with laser beams). Finally, thinking John Williams too sophisticated, the Flash Gordon team reached out to Queen (the latter a toss-up, admittedly).

It’s impossible not to root for this movie though. The lushness, the erratic designs, fetching costumes, surreal skies – Flash Gordon overdoes everything, to which co-star Brian Blessed takes to glorious, further extremes. Dressed in phony wings and revealing outfit, Blessed belts out lines as if delivering Shakespeare to a massive auditorium.

And Jones, a blonde haired, blue-eyed, buff hero, brings these diverse factions together under a common cause. One of Ming’s underlings Klytus (Peter Wyngarde) looks wide-eyed at a brief Hitler clip (seen in the mind of Holocaust survivor Dr. Zarkov (Topol)), in case the connection wasn’t clear, giving Flash Gordon greater gravitas than low-rent, comic book-y save the damsel routine. It’s all so righteous, the only true division happening between overdrawn good and evil factions.

The difference between utter camp failures and Flash Gordon is how Flash teeters between acknowledging its floundering intellectualism and trying so earnestly to dress it up in fascism, anti-Asian garbage, wild sexuality, and total outlandishness. Flash Gordon originated in 1934, on the precipice of World War II, and despite 40+ years between then and this movie, it’s as if Flash Gordon spent that time frozen on planet Frigia. Only Ming’s volcano attacks thawed it out, and although he seeks to destroy Earth with natural disasters, humanity can do that by themselves. But, Flash won’t admit that. He stands for all Earth because as he says, Earth is, “Not too bad.” Who can argue that? 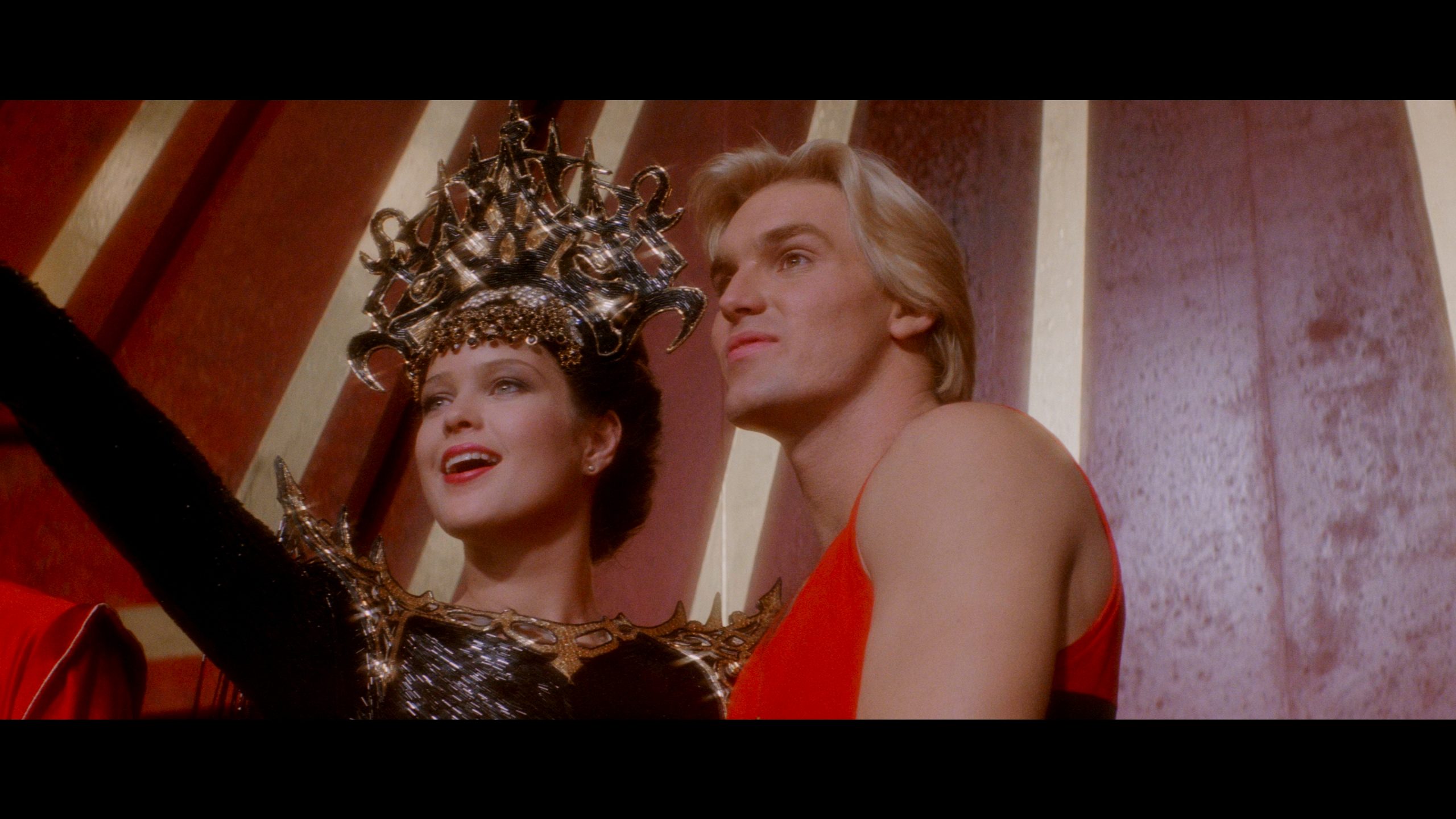 At times almost matching true Technicolor in vibrancy, saturation gives Flash Gordon ridiculous, brilliant primaries. The painterly skylines, decorative costumes, and the overall world in this movie never exhibited this much density prior. Golds, reds, blues, greens; all of it shimmers and glows.

Stereo and 5.1 options; it’s a toss up. The 5.1 offers better low-end extension, even if the output sounds muddy. However, discrete use lacks finesse, ultimately too hollow as rears mirror the stereos. For the stereo track, the natural, organic quality represents greater accuracy, but with limited LFE.

Either way, the fidelity soars. Aside from limited sound effects, dialog crispness captures the best of ‘80s era audio. Queen’s theme is amazing too, bold and sharp, avoiding any distortion. The looming build-up is faultless.

Three commentaries on the UHD. Is that enough? First up is writer/director Mike Hodges, the second calls on Brian Blessed, the third a fan track. A 35th anniversary reunion also includes some footage from the green room. VHS footage from the prop rooms and sets runs 14-minutes. Director Nic Roeg’s unmade version of Flash Gordon is given focus for almost 28-minutes. An episode of the late ’70s animated TV series follows (and looks fantastic). A discussion of merchandise runs a bit longer than four minutes.

Ten interview segments come next, including some chat about deleted scenes. Keep scrolling the menu to access storyboards, stills, and trailers.

Pop in the Blu-ray and watch Life After Flash, worth buying as a stand-alone documentary, tracing Sam Jones’ life after the film. In the bonuses you’ll find a slew of deleted and extended scenes, listed individually.

Utterly delightful, Flash Gordon never fears being a knock-off, or putting an absurd spin on things, even if it’s a pillow fight.