(Lots of) Something Borrowed

Split Second was only a few years off in its future predictions. Set in 2008, climate change caused extensive flooding, there’s a plague running through London, the US blocked the UN’s climate agreement, and Satan is loose, ripping people’s hearts out. In 2020, only the latter is unconfirmed – so far.

For all the water, illness, and graphic murder, Split Second’s “future” is arguably a better place to be: It has Rutger Hauer as Harley Stone, and 2020 does not. Stone’s surname defines him, an amalgam of late ‘80s and early ‘90s action movie cops who beat up anyone in their way, defy the police chief, and fire weapons at will because they can. It’s a performance oozing a masculine cool, lighting cigars with a blowtorch, walking around with a gun two sizes beyond reason, and spouting one-liners as if always ready with another. He hooks up with Kim Cattrall, who’s here to scream and be kidnapped because that’s all women can do in a story like this.

Wet, endlessly backlit, messy, and perpetually seedy, Split Second adores fear. Because of past trauma, Stone downs coffee like alcoholics chug booze. He’s teetering, yet that manly ideal doesn’t allow him to drop his guard; be tough, always, even when there’s a heart-ripping murder monster nearby. It’s a movie exploiting nudity, gore, and cop tropes, if so visually delicious, those complaints readily fall aside.

Alongside Hauer, co-star Alastair Duncan, mostly comic relief, if also mandhood’s “other” side. Educated, into science, and sheepish, he’s a buddy cop cliché, but set against Split Second’s violence, a natural fish without water – in a movie with too much water. Split Second uses London as the backdrop, yet isn’t without an American slant as guns solve everything. If not, time for bigger guns.

The villain matters too, based in astrology, and taking a decided Biblical turn through devilish markings and blood-scrawled warnings. Given how little the beast is seen, it’s a wonder if this thing exists only in Stone’s tortured mind. Or, if he’s seen too much Alien or Predator (since Split Second borrows liberally from both). Then Hauer, Duncan, and Cattrall blow the thing up to confirm a physical existence.

Split Second never provides a definitive reason as to how/why this monster entered the world; it’s more a figment of the world’s deterioration, maybe a punishment for letting things collapse as they have. That fits the thin religious connection, and lets Hauer’s Stone be so cool as to murder Satan. 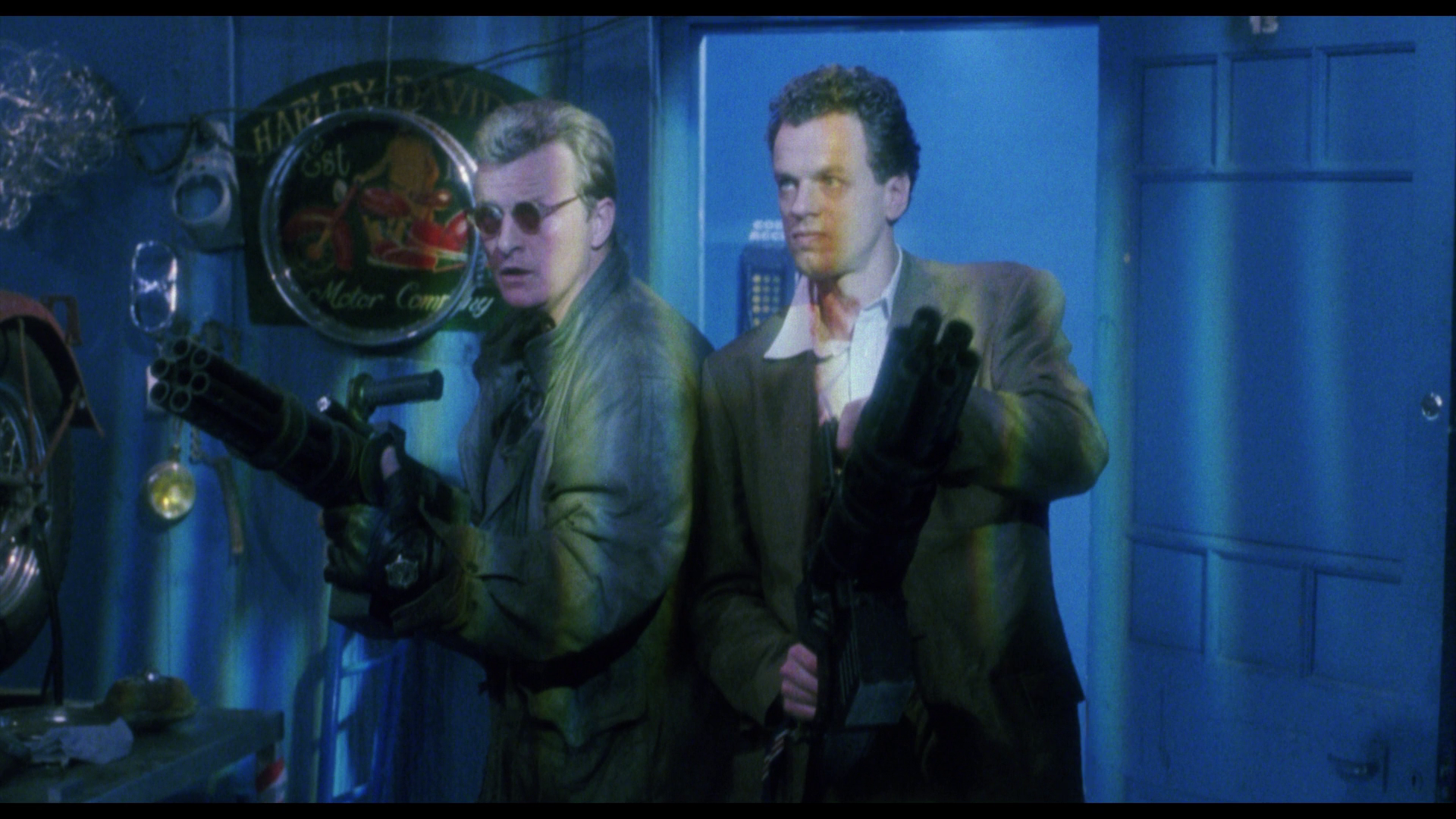 MVD cites a new 4K scan from a release print and… well, this does not have the 4K sheen. Even allowing for generational loss, resolution just isn’t here. Split Second looks soft, hazy, and fuzzy, some of that being intent, the rest lackluster mastering. A few shots even appear to misalign, leaving double images.

Grain reproduction leaves murky texture behind, minimally defined. Fidelity wanes, listless and dull, lacking in HD punch. Sagging definition nears SD quality, but more of an in-between akin to say 720p. During mastering, clean-up didn’t do much either given the dirt left behind. Reel markers remain too.

At least contrast is perky. Intensely focused lighting, neon signs, and deepened shadows combine for a pleasingly deep image. Dimension is always preserved. Split Second uses a striking color palette too, often soaked in blues, if sporting neon pinks and reds too. The “future,” or so Split Second thought.

Key to the sound design is a heartbeat, playing whenever the creature nears. Via this PCM stereo track, there’s some clarity and depth to each pump. Being from ‘92, such low-end accentuation doesn’t come from action or gunshots, so acknowledging the low-end gives this track some range.

MVD tracks down the Japanese VHS cut, which added around six minutes to the runtime. Obviously in SD and with burned-in Japanese subtitles, the mere inclusion deserves full credit. Commentary (over the US version) comes from historian Mike Leeder and filmmaker Arne Venema.

From there, a slew of lengthy interviews, including a fun back-and-forth with Alastair Duncan and producer Laura Gregory. They speak for 27-minutes, and use one another to remember specifics. Composer Stephen Parsons chooses a pub for his interview location, and casually chats for 22-minutes. Next is line producer Laurie Borg (23-minutes), effects man Cliff Wallace (32-minutes), and cinematographer Clive Tickner (19-minutes).

The 15 unaltered images below represent the Blu-ray. For an additional 22 Split Second screenshots, early access to all screens (plus the 120,000+ already in our library), 100 exclusive 4K UHD reviews, and more, subscribe on Patreon.