Ironheart runs for 92-minutes. At least 25 of those are comprised of someone driving, and a few additional minutes of people dancing. To be clear – just driving, not a chase. And dancing, as in the comically corny 1996 Democratic National Convention where the entire crowd broke out in the Macarena.

Released mere months after Los Angeles broke out in violence after the Rodney King beating, Ironheart casts Britton K. Lee as an LAPD detective, teaching a SWAT team how to… beat people. That’s not just unfortunate timing, it’s gross. Lee ditches LA though, sent away to a hotbed of criminal activity in 1992: Portland, Oregon. It’s there he’ll drive. A lot. Enough to believe Ironheart used every second of filmed footage, akin to a watching a transition scene montage.

[Ironheart is] akin to a watching a transition scene montage

Director Robert Krause once handled Enter the Dragon. Two decades later, he was responsible for Ironheart. If there’s any doubt as to Bruce Lee’s production influence, compare the two films. Enter the Dragon’s fluidity and motion felt pure; Ironheart doesn’t show a single kick or punch without an edit separating things.

The cause for violence is sex trafficking. Lee comes up against Milverstead (Richard Norton), already a stock ‘90s villain by 1992, his muscle provided by Ice (Bolo Yeung). Protagonist Lee, a clearly talented fighter, lacks screen presence (this his only starring role, his only additional credit a small part in 1989’s Fatal Revenge). Against Yueng, that doesn’t really change, despite potential in staging them against one another.

This is an abysmal, mostly unwatchable action movie. It offers no legacy, no memorable moments, no schlock worth seeing, and a story so fractured between dancing and driving, it’s difficult to grasp what’s happening. 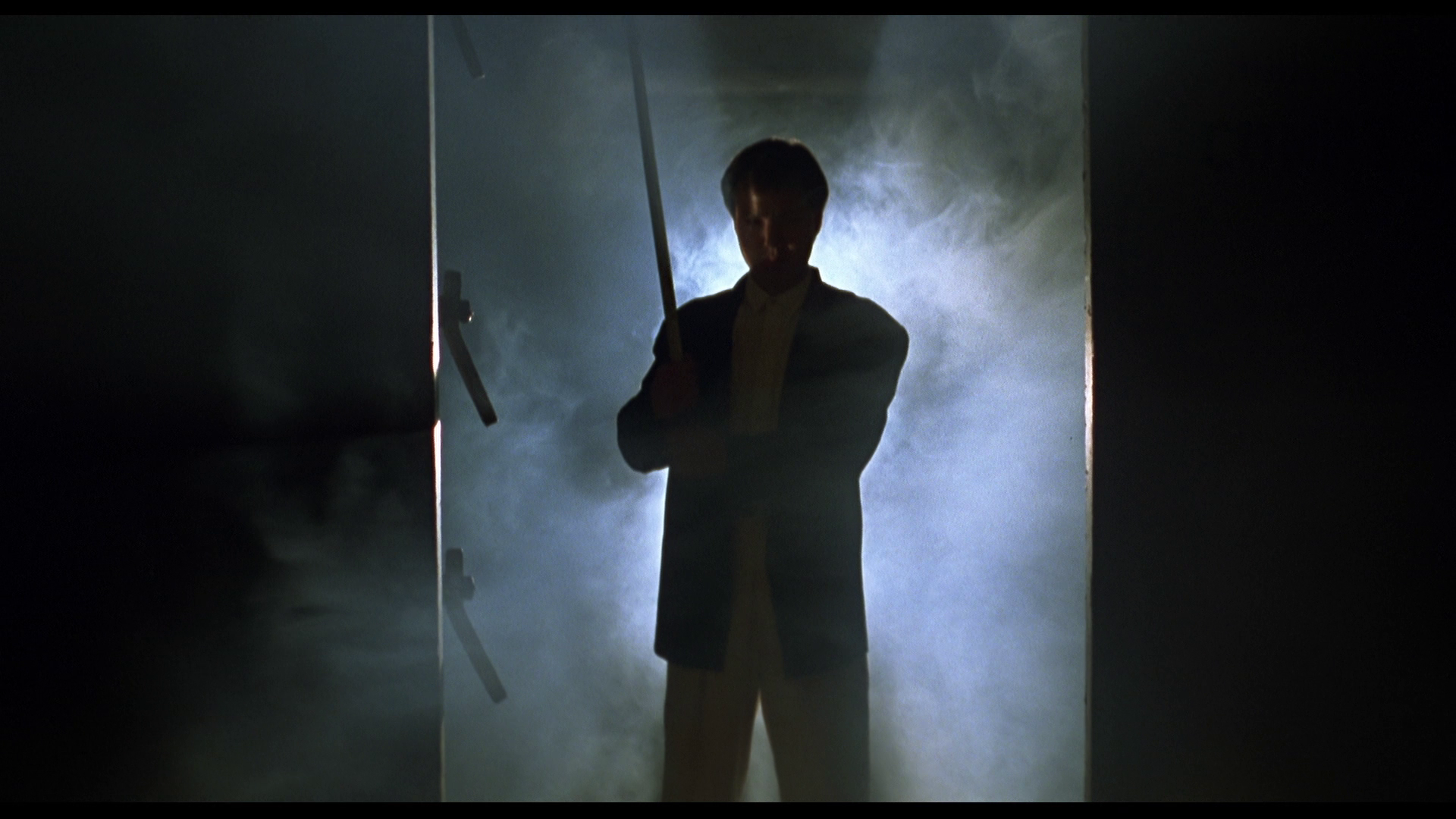 No one released Ironheart to DVD Stateside. That was the right decision. MVD however sees this as fit for Blu-ray, paired with another Bolo Yeung flick, Bloodfight on the same disc. Of the two, this transfer stands out as an undeniable winner, faults and all. Notably, Ironheart is well overdue for a cleaning. There’s so much dust on the print, it’s like viewing this while houseflies swarm the room. Only minor damage remains though.

Since Ironheart skipped DVD, the source is likely the same master struck for a UK Blu-ray (back in 2015). It’s passable. There’s visible texture and clarity behind a minuscule grain structure. A little smearing is just an anomaly, soon disappearing after only a few early scenes. Reasonable sharpness rarely loses its hold.

Solid black levels highlight club interiors and nighttime cinematography. Natural if fading color benefits the imagery, along with perky contrast. Expect no miracles, but for a movie like Ironheart, the best it’ll ever look most likely.

In fidelity terms, dialog sounds recorded on a cassette and then played back. Small range from the repetitive soundtrack aside, the end result is an analog-esque PCM stereo track. A few minor touches in left and right channels acknowledge the spacing.

For a real oddity, listen to an exchange around 1:16:00. Either something went amiss in Blu-ray mastering, or Ironheart’s audio wasn’t finished. Between lines, there’s totally dead air, ambient sounds silenced until someone speaks again. Bizarre.

Abysmal, boring, and unwatchable, Ironheart represents the worst of the video store VHS era, made by people who knew better.

The 15 unaltered images below represent the Blu-ray. For an additional 21 Ironheart screenshots, early access to all screens (plus the 120,000+ already in our library), 100 exclusive 4K UHD reviews, and more, subscribe on Patreon.