Universal’s straight B-horror output often borrowed genre elements from one another; The Black Castle is almost all of them bunched up as one. Karloff and Chaney; a castle lit by flame and lightning; murder; an evil, possessive count; romance; creaking door hinges; trap rooms; an alligator moat; mute servant; wild science; a stock studio score; short of an actual monster, Black Castle hits them all.

It’s weird – The Black Castle is comfortable as a result. Watching this is akin to being covered by a favorite blanket. The script’s predictability, the character’s routines, the limited mystery all play out uninteresting and flat, yet when the Universal logo hits, there’s an air surrounding this tale. When Karloff appears, menial a role as he plays, it’s screen magic.

The Black Castle feels exhausted, released in 1952 as post-war cinema began its rush toward atomic terror

Rita Corday, the damsel in this story, isn’t given room to develop beyond a subdued, oppressed woman, forced into marriage. The Black Castle adds a definite mean streak though. Murderous count Stephen McNally is outrageously evil, as abusive as he is unflinchingly cruel. Dressed in a cape, sporting an eye patch, and hunting leopards, McNally soaks up this role, in and out of English pleasantries as needed to appease guests, feeding his ego. The Black Castle traipses around turn-of-the-century 1700s British classism, through dialog briefly addressing the nation’s ruthless colonialism, but mostly treating the setting as costume fluff.

Undervalued director Nathan Juran handles the material with tradition, yet along with his cinematographer, finds unique framing and staging to bring out McNally’s sinister side. He’s seen sniveling through windows, and boasting by fire. Hero Richard Greene comes off as the underdog through mere visuals, let alone his status.

There is a depressing quality too, seeing Lon Chaney Jr. in his final Universal role, totally mute, reduced to a mad assistant, almost certainly to cover the actor’s alcoholism. Chaney’s outbursts look authentically angry and frustrated, the leering quality in his actions more vicious than even some of his Wolf Man kills.

The Black Castle feels exhausted, released in 1952 as post-war cinema began its rush toward atomic terror. Yet, Black Castle is more akin to something from a decade prior, with those old backlot sets still finding work as Karloff, Lugosi, and Chaney roamed. Treat Black Castle as the finale for those classics, a send-off worthy in tone, style, and craftsmanship, even without a single surprise or fresh idea. 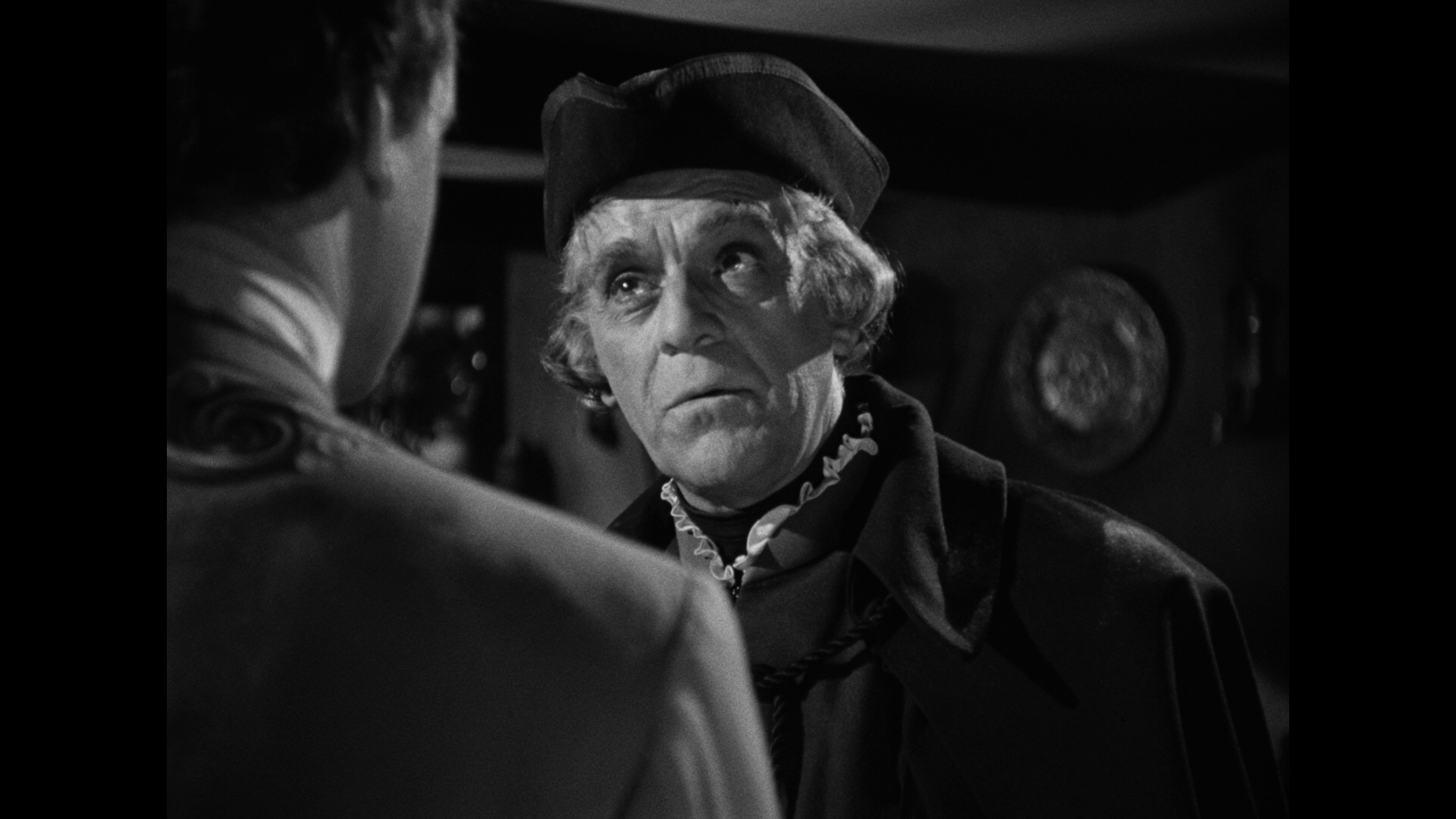 Scream Factory notes a new 2K scan for this disc, the first of four in the Universal Horror Collection 6. Like this movie, it’s clear Scream is digging into the vaults for anything to keep this series going, yet doesn’t treat this movie as anything lesser. A natural, well maintained grain structure preserves detail, rendering costumes with care. Superb texturing highlights the period-correct dress, all the frills and lavish flourishes visible. Some facial detail squeezes out where the cinematography allows.

Immediately notable is gray scale, digging in via dense black levels and sterling highlights. Range is impeccable. Image depth and density loses nothing over the runtime, always consistent, solid, and pure. Black Castle needs those shadows to work, and this Blu-ray makes sure to present them as intended.

A few scratches aside, the source print endures minimal damage. It’s stable too, no gate weave noted, and other than fade outs/transitions naturally loosening resolution, Black Castle’s performance is only a step below other vintage masters done at 4K.

Dialog clarity rises over expectations, precisely captured in this DTS-HD track. Almost imperceptible static runs through a few spoken lines, so minor as to diminish nothing. Fidelity holds to this constant.

Stock score elements wane a little, but never too severe to distort the highs or lows.

Tom Weaver’s commentary is great as always, a must-listen given his awesome presentation and knowledge base. An (almost) 14-minute featurette follows Universal’s mid/late ‘40s and beyond horror output, presented as a conversation with Kim Newman. An image gallery jumps in next.

There’s not a single surprise in The Black Castle, but it’s invitingly familiar, using all of Universal’s best cliches and tropes.

The 15 unaltered images below represent the Blu-ray. For an additional 31 The Black Castle screenshots, early access to all screens (plus the 120,000+ already in our library), 100 exclusive 4K UHD reviews, and more, subscribe on Patreon.