Based on the New York Times bestseller by James Patterson and Liza Marklund, The Postcard Killings hits you over the head with unnerving murders and sophisticated suspense. Recalling the gruesome deaths of Fincher’s Seven, the criminal thriller features a serial killer preying on young married couples with a couple of jarring twists.

Jeffrey Dean Morgan gives a gritty performance as an American detective chasing down his daughter’s killer across Europe. Heartbroken over seeing his young daughter and son-in-law brutally murdered on their honeymoon in London, the grizzled cop goes looking for a devious killer that seemingly left no clues behind.

Starring Jeffrey Dean Morgan, Cush Jumbo, and Famke Janssen in a smaller role, Danis Tanovic’s movie crackles with taut pacing and a superb ensemble cast from Europe. Filmed in Europe, the movie travels across the continent from Madrid to Stockholm. The clever screenplay doesn’t pull its punches, removing the rug out from under you when least expected.

Grieving for his daughter, Jacob (Jeffrey Dean Morgan) discovers similar murders are happening in other European cities. Each murder is preceded by a simple postcard to a local journalist. The victims are all elaborately posed and the local police are baffled.

The brash American decides to take matters into his own hands, investigating the murders by himself. Jacob meets Dessie (Cush Jumbo), an American journalist working in Europe. Jacob feels compelled to find the serial killer before another victim is claimed.

A serial killer movie is only as good as its primary villain. The Postcard Killings has an excellent nemesis for Jacob, smartly written and gifted with real character. This is not your usual run-of-the-mill, garden variety serial killer. The thrill of the hunt smoothly builds and builds until a dramatic showdown, soaked in kind of an old-world charm from Europe.

Everyone talks these days about successful movies subverting a viewer’s expectations. What The Postcard Killings does so well is create something new and fresh in the tired genre with its characterization. Surprising and even poignant in moments, The Postcard Killings is a clear cut above the direct-to-video fodder common in the genre with stylish direction and a clever duality. 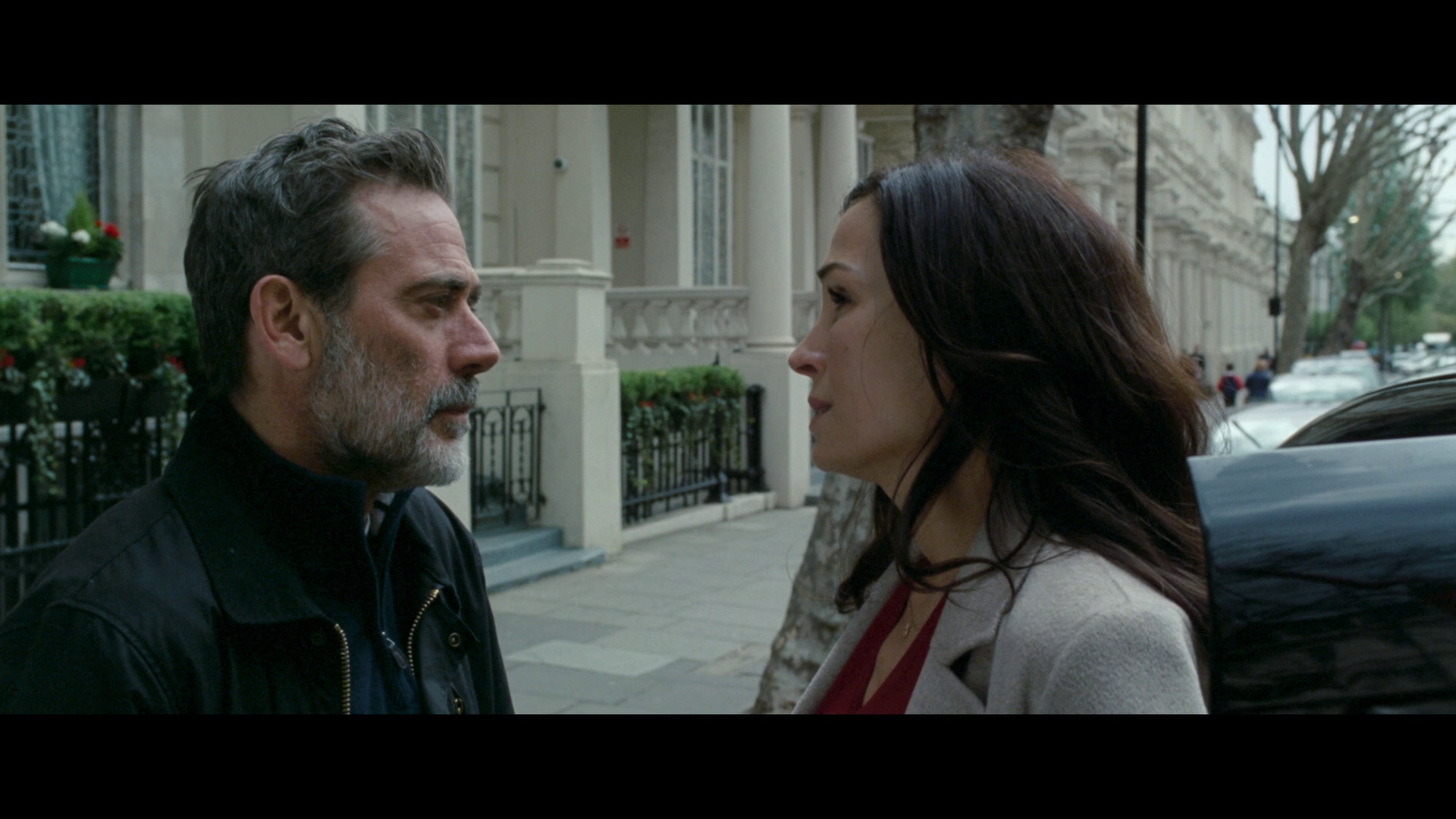 The filmmakers have consciously chosen shooting on actual celluloid for The Postcard Killings, a creative choice that works for the scenic criminal thriller. The 2018 production films all over Europe with a tasteful elegance, endowed with a slightly softer appearance than new digital movies. It’s almost strange seeing grain on a new production with the advent of digital cameras.

Restraint has been shown on the color correction, emphasizing a largely natural palette and lighting over more stark choices. The 2.35:1 presentation has satisfactory picture quality with decent definition and authentic film texture. Its 1080P video has cool flesh-tones and mildly sub-par shadow delineation. A crisp contrast and adequate black levels round out the video quality.

Released by RLJ Entertainment, the main feature runs 104 minutes. It is encoded in modest AVC bitrates on a BD-25. Being a new film, the elements have no blemishes. This isn’t reference quality material but the moody atmosphere acquits itself nicely in HD quality. Close-ups have visible fine detail and unfiltered texture. There are no signs of real post-processing in the transfer.

The Postcard Killings is largely a dialogue-driven affair with a few flourishes, which limits the discrete activity available in the 5.1 DTS-HD MA soundtrack. A modest score fills out the soundstage with rear support. The audio recording is pristine and dialogue nicely meshes with louder audio cues.

Optional English SDH and Spanish subtitles appear in a white font. They remain on display inside the scope presentation at all times.

RLJ Entertainment includes an embossed slipcover on first pressings. A series of three RLJE trailers play before the main menu. The disc is listed as Region A.

The Making of The Postcard Killings (07:01 in HD) – A smooth featurette offering interview clips from the cast and crew, including leading stars like Jeffrey Dean Morgan and Famke Janssen. Unfortunately, more of the basic plot is recounted than actual insight into the movie. The most interesting moment occurs when cinematographer Totino discusses why he shot the movie on film rather than digital.

The Man Who Killed Hitler and Then the Bigfoot Trailer (02:11 in HD)

Taut and embellished by a strong lead performance from Jeffrey Dean Morgan, the serial killer mystery delivers gripping suspense in a clever screenplay.

The 15 unaltered images below represent the Blu-ray. For an additional 22 Postcard Killings screenshots, early access to all screens (plus the 100,000+ already in our library), 100 exclusive 4K UHD reviews, and more, subscribe on Patreon.