Dr. Sigmund Walters (John Carradine) keeps a book on glandular conditions. One paragraph says such research might lead to, “racial improvement.” Later, when almost killing a woman during experimentation, he asks, “Why should a single life be so important?” Walters isn’t a well disguised Nazi, German name and all.

Captive Wild Woman released during wartime, and Carradine, in his first major screen role, stands in for the German Reich. From an ape he spawns a beautiful woman – a white woman of course – who gradually turns black, and back into an uncontrolled, savage beast. Captive Wild Woman is not lacking in racist subtext, nor is the context unclear.

Away from Carradine, there’s a circus. The vast majority is stock footage that endlessly cycles. It’s supposed to be star Milburn Stone in cages with lions and tigers; clearly, it’s not. Captive Wild Woman concerns taming the wild, and maintaining civility. Every second though is crude. Viewed nearly 80 years later, the staged fights between big cats only suggest a naive cruelty, not excitement.

The runtime barely crosses the hour mark. Yet, 20-minutes is spent viewing stock footage from 1933’s The Big Cage. Tigers and lions are shot at and whipped. In the decade between The Big Cage and Captive Wild Woman, no progress was made in training or sensitivity, considering this footage was still acceptable.

Worse, it’s not used for anything substantial. Carradine’s seedy performance broadly construes an enemy ideology. The few outbursts over morality stay within typical boundaries, obvious in their arguments. When that “wild woman” appears – Acquanetta in her third role – she stares blankly. Never does she utter a word. Transformed to an ape, her rampage claims a mere two lives, hardly the body count expected of low-grade exploitation. The ape suit looks pulled from a closet where it sat since the ‘30s.

No question – the title holds power. It’s suitably ridiculous yet undeniably evocative. If anything, the name is Captive Wild Woman’s greatest asset, still drawing the eye under a promise of seeing a woman lash out at her captor. That happens. Sort of. It’s mostly off-screen. Oddly, off-screen is the where Captive Woman belongs too – forever off any screen. 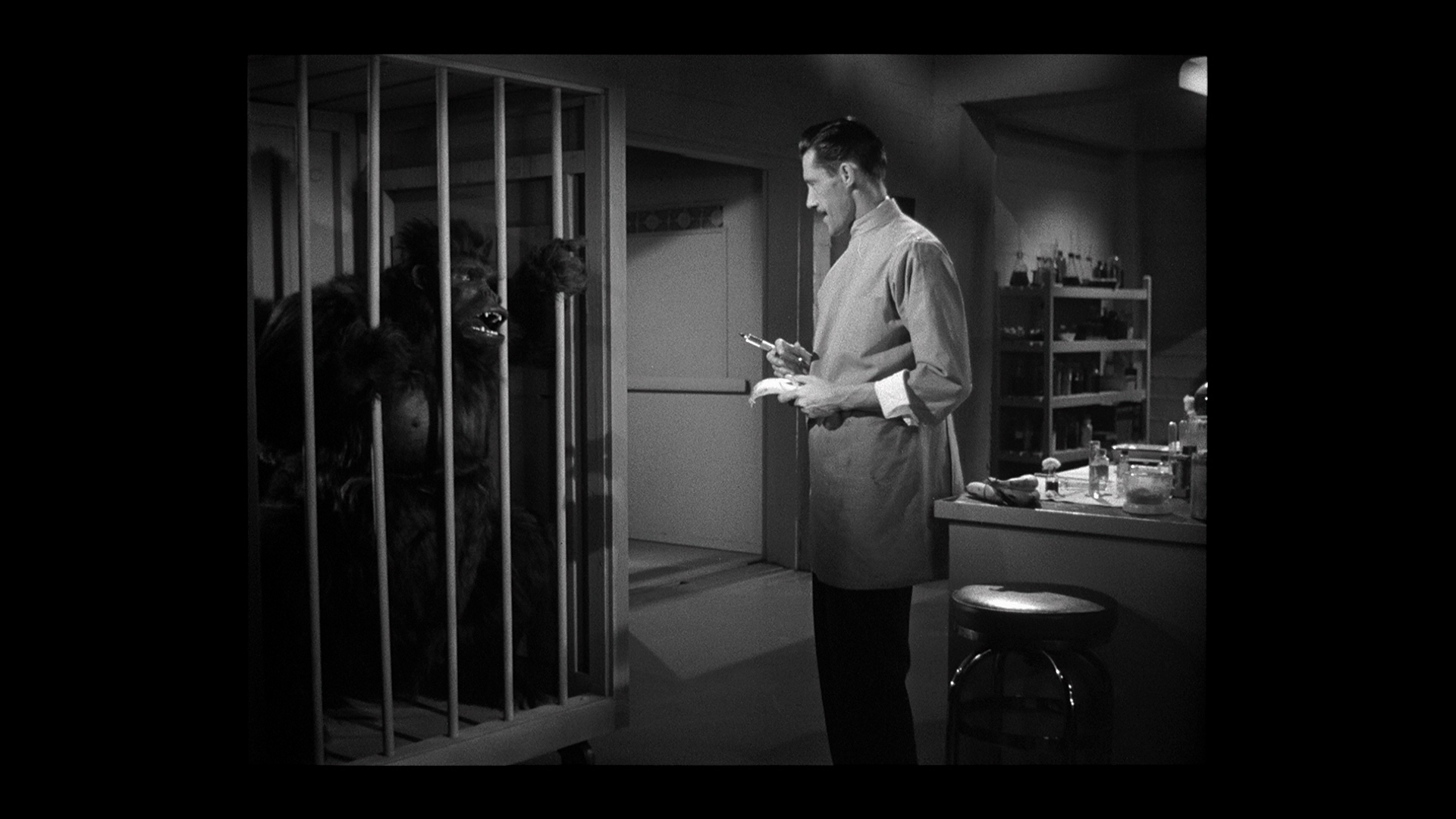 Part of the Universal Horror Collection 5, Captive Wild Woman debuts on Blu-ray with a passable transfer. While from the vault’s scratch-and-dent section, marks on the print leave little genuine impact. It’s a stable source.

Tiger growls nicely work some bass into the treble-heavy track. Clarity is sufficient for something this vintage, resolved nicely by the DTS-HD track.

Tom Weaver jumps in solo for commentary work, but is aided by an animal trainer at times to speak on the circus footage. Weaver drops some fascinating information about Acquanetta late on this track too.

Horrendously dated in its worldview, Captive Wild Woman stands against Germany’s WWII ideology, but makes equally egregious errors of its own.

The 15 unaltered images below represent the Blu-ray. For an additional 21 Captive Wild Woman screenshots, early access to all screens (plus the 100,000+ already in our library), 100 exclusive 4K UHD reviews, and more, subscribe on Patreon.