It’s The Thing, but with cops. That’s all Eye See You is. Unlike The Thing, which held deep rooted, successful subtext, Eye See You instead admonishes mental health, turning police against one another while chasing down their killer.

The story is less about trauma and cops than it is tropes and the genre playbook. An isolated location. A snowstorm. Phones go out. Everyone splits up. The killer attacks. Eye See You competently strings events together with a lower budget veneer. Stacked casting puts a number of names on screen. Yet, it’s too much of nothing.

Eye See You doesn’t care past the opening 20-minutes

In its first act, Eye See You is close to finding… something. Stallone’s trauma manifests in angry, dangerous behavior. He’s sent to therapy along with other cops suffering similarly – they bicker and fight. One sees admission of guilt as failure, taking the masculine route, drinking rather than crying. Another tries playing peacekeeper, but the surrounding aggression causes flashbacks. In a therapy circle, discussing their angst, Eye See You shows a little humanity. Soon, it’s a slasher movie.

Any thriller or horror movie leads characters to do stupid things. Rather than drunken college teens on spring breaks, Eye See You concerns people supposedly trained to defend themselves, tactically too. Yet, they succumb to idiocy, creating opportunities for their deaths more often than thinking rationally.

That’s the key fault – although about police, there’s little policing involved. Together to make themselves right, at no point does Eye See You project their competency. Substance finds a substitute in gory murder, leading to Stallone’s muscle-bound kill after discovering the perpetrator. Maybe Stallone is cured in the end. That’s not made clear. Credits fade in, absent a meaningful resolution. For a story about the lasting and wounding impact from policework, Eye See You doesn’t care past the opening 20-minutes. Neither should an audience. 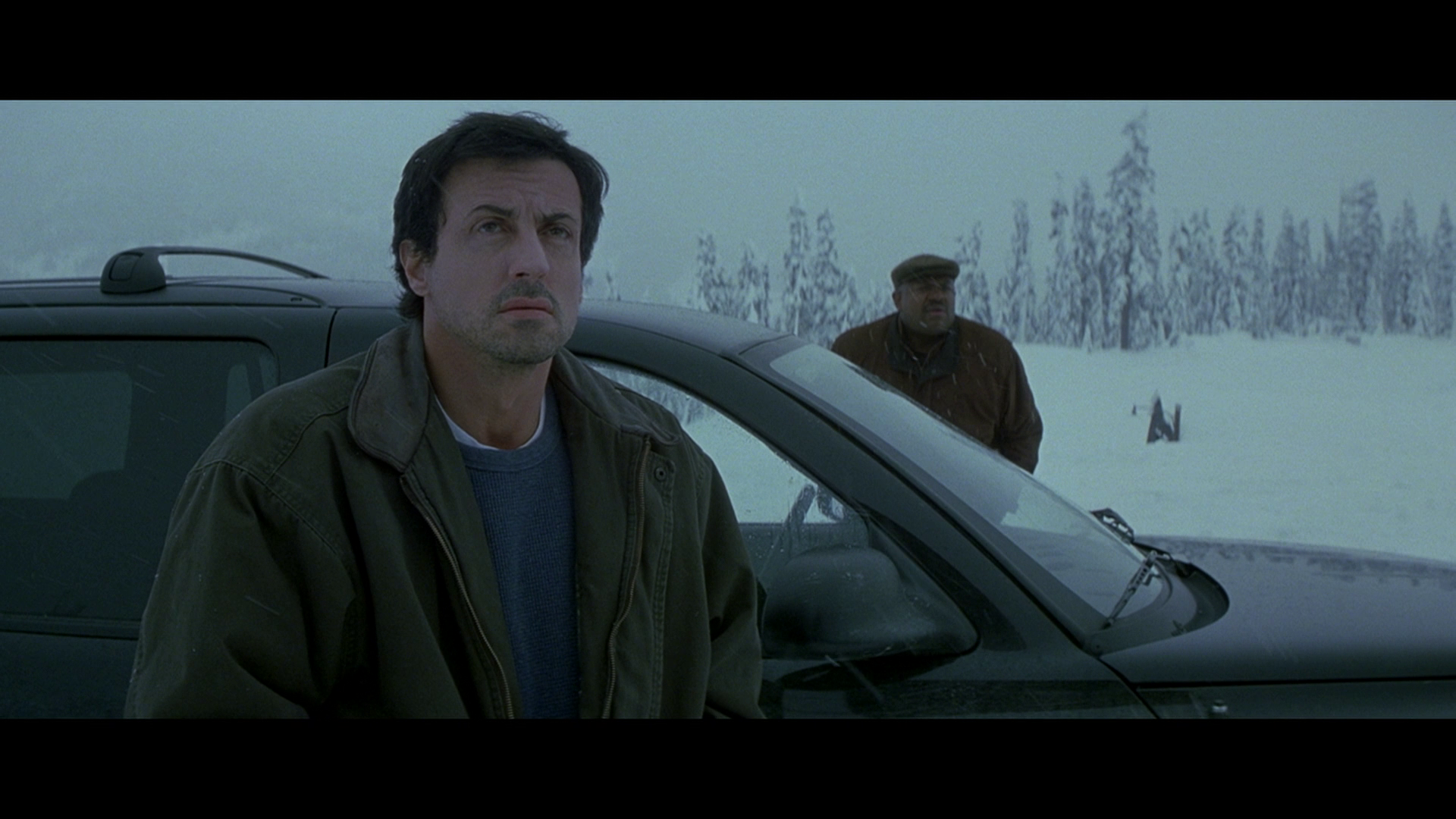 Universal effectively disowned this movie. After a troubled production, Eye See You came and went with little notice. The Blu-ray debut comes from MVD – their Marquee Collection – and it certainly appears Universal didn’t care. What’s here sees dirt and dust scattered on most frames of the disc. Damage, luckily, isn’t an issue, but a clean-up pass cannot hurt. It looks as if the print was left in a vault, uncovered, and transferred to disc.

Indicative of the DVD era, edge enhancement mars the natural clarity. Grain looks chunky and without nuance; sharpening does that. Limited detail rises from this older master, confined primarily to close-ups. Even then, it’s minor.

Staged mostly inside an odd, WWII-era bunker-like structure (the perfect place to host recovery sessions, clearly), darkness swells. Occasional crush limits shadow detail. Contrast is rarely given a moment to show itself, even in snow. Flat color fits the mood, generally slathered in blues to convey the surrounding air’s chill.

A movie of atmosphere, spatial effects send wind around, even when inside. Directionality sustains ambiance for the full runtime, and there’s lots of it. Imaging precisely renders shattering glass and gunshots well. Inside a bar, sounds spread wide. Even the score drifts outward, filling stereos and rears available to this DTS-HD 5.1 track (PCM stereo is also a choice).

In the post-production mess, Universal tinkered extensively to create the final cut. For the first time, MVD presents director Jim Gillespie’s original, unaltered edit. It’s, at times, radically different, if still hampered by the concept. Note this version is SD, and likely from a taped source. It looks as such. However, seeing this is incredible.

Eight deleted scenes and EPK interviews with the main cast (minus Stallone) come before a photo gallery.

Eye See You throws away a great cast and idea by reducing police trauma to a derivative, familiar horror/slasher movie.

The 15 unaltered images below represent the Blu-ray. For an additional 26 Eye See You screenshots, early access to all screens (plus the 100,000+ already in our library), 100 exclusive 4K UHD reviews, and more, subscribe on Patreon.