After the Big One

Snake Plissken is back and ready to kick more butt! Fifteen years after saving the president in Escape From New York, John Carpenter and Kurt Russell teamed up for a sequel to the beloved cult classic with mixed results. The uneven Escape from L.A. is packed with high-octane action and set pieces hampered by shoddy CGI effects.

Moving the setting to a post-apocalyptic Los Angeles devastated by an earthquake and cut off from the rest of the country, Snake is sent in on a mission against rebel leader Cuervo Jones with the world’s future on the line.

Along the way Snake tangles with a rowdy cast of characters played by Stacy Keach, Steve Buscemi, Bruce Campbell, Peter Fonda, George Corraface, Cliff Robertson and Pam Grier. Keach assumes a similar role to Lee Van Cleef in the first movie. Robertson plays a tyrannical president that sees his daughter turning on him. In the strange near-future of this movie, the government has become a weird theocracy bent on running society with old-fashioned morality.

… Escape From L.A. is action with a smirk and wink to the audience

Escape From L.A. is odd in that it’s basically a remake of the far more entertaining Escape From New York, rehashing many scenes and character archetypes from the original. Carpenter has great fun trashing many of L.A.’s biggest landmarks in an opening that shows the city’s destruction. It’s a b-movie loaded with cheesy action and oddball characters, mostly held up by Russell’s signature role as Snake. The veteran actor is clearly enjoying himself. Seeing Russell back as Snake is most of the real fun in Escape From L.A.

The bit players are hit or miss, crammed in between the extended set pieces made for maximum action and wanton destruction. Bruce Campbell appears in enough make-up that you may not even recognize his trademark chin. Escape From L.A. is hampered by badly dated CGI that never looked good, even on release in 1996. Carpenter bit off more than he could chew using new visual effects that hadn’t been perfected by release.

Escape From L.A. is action with a smirk and wink to the audience, embracing its b-movie roots. That formula worked perfectly for Carpenter and Russell in Big Trouble In Little China, but something is a little off here. There is just enough juice left for Carpenter and Russell to squeeze this last film out of Snake Plissken before sending him off into the night for good. 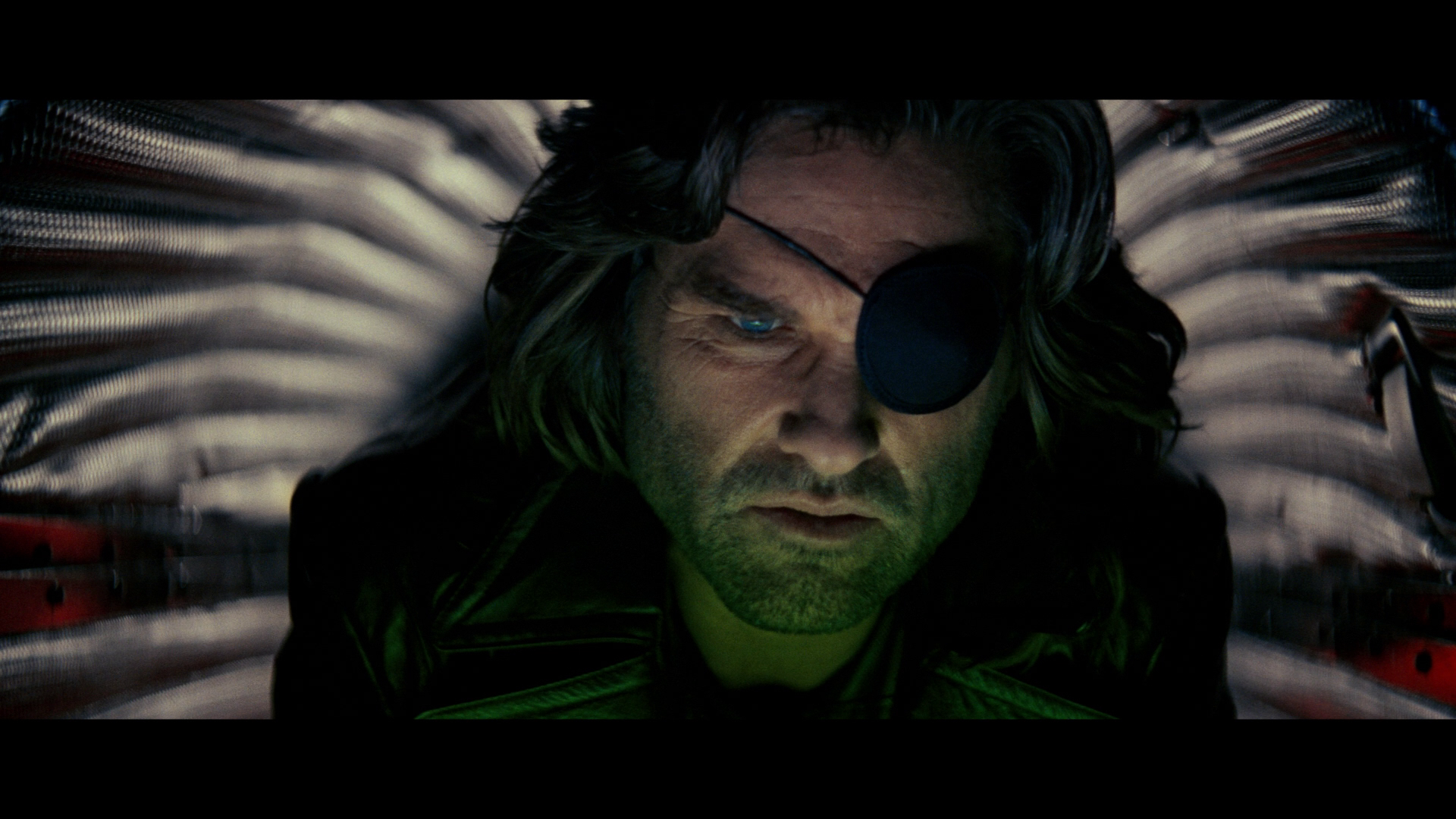 If it’s true that a beautiful new 4K transfer is the sine qua non of collector’s editions, Scream Factory has met that condition. Struck from the original camera negative and using new color correction to cover up some of the movie’s poor CGI effects, this is a markedly improved presentation over Paramount’s original Blu-ray. The 2.35:1 video has palpable texture and refined levels of detail only possible with a quality 4K scan.

The color timing has been darkened from the overly bright Paramount disc. I wager it’s a conscious choice by the video technicians, which improves the ugly, dated CGI by largely blending it out. The film elements remain in perfect condition without any blemishes.

The AVC encode is meticulous, averaging 36 Mbps over the entire feature. Despite the dark palette and frequent night scenes, there isn’t a hint of macroblocking or other compression bugaboos.

If Escape From L.A. were a more popular movie, I’d say hold off until this 4K transfer gets its day on UHD. But given the economics of the format, this impressive Blu-ray presentation should tide you over until that day. It’s a fantastic film transfer.

The 1996 action thriller’s audio doesn’t quite match up with the sheer power and bombast of reference soundtracks like Transformers. Escape From L.A.’s 5.1 DTS-HD MA offers a decent surround mix that peaks early in the film when the city of L.A. is destroyed and turned into an island by a 9.6 earthquake.

The sound design is somewhat underpowered with a few wimpy effects. Motorcycle exhaust lacks that little extra oomph heard in the best LFE. Everything else from the older surround mix holds up fairly well, including the score by John Carpenter and Shirley Walker.

Optional English SDH subtitles always play inside the scope presentation. A secondary 2.0 DTS-HD MA soundtrack gets included with a smaller soundstage than its surround sibling.

In some ways this Collector’s edition for Escape From L.A. from Scream Factory is a major success, but fans will be quite disappointed discovering neither John Carpenter nor Kurt Russell are involved in the special features. Carpenter has given audio commentaries for most of his movies, but declined for Escape From L.A. Kurt Russell couldn’t find the time. The movie was viewed as a commercial and critical flop at the box office, which may be involved in their decisions.

What Scream Factory does deliver is a slew of new interviews from cast and crew, headlined by familiar genre stars Stacey Keach and Bruce Campbell. That’s a huge improvement over the barebones Paramount BD and DVD, now over a decade old. The only reason to keep the Paramount BD around is if you need its foreign dub and subtitle options.

As a Collector’s Edition from Scream Factory, the set is guaranteed to come with a slipcover the first three months of release. Artist Hugh Fleming provides the new cover art. The first 700 orders from Shout Factory’s site will receive a limited-edition 18” x 24” rolled poster of the exclusive new illustration. The Blu-ray is locked to Region A.

One Eye is Better Than None – an interview with special effects artist Jim McPherson (17:58 in HD)

The Renderman – an interview with visual effects artist David Jones (19:04 in HD)

Still Gallery (07:31 in HD) – Dozens and dozens of still images and pictures from the production play without user input.

A so-so follow-up to Carpenter’s cult classic Escape From New York with Russell’s performance as Snake its primary saving grace.

The 15 unaltered images below represent the Blu-ray. For an additional 33 Escape from LA screenshots, early access to all screens (plus the 100,000+ already in our library), 100 exclusive 4K UHD reviews, and more, subscribe on Patreon.