More than a typical good-versus-evil dichotomy, Sonic the Hedgehog brings small nuance to its otherwise unremarkable, juvenile cool aesthetic. There’s Sonic, forced into our world from an alternate dimension, keeping his distance as to not be discovered. He talks to himself. A lot, actually. But staves off loneliness by trying to form a connection with people.

His adversary is an isolated government goon, Dr. Robotnik (Jim Carrey) who detests everyone. Rather than see others as equals, he sinks into a world of technology – things he can control and manipulate.

On Sonic the Hedgehog’s kids-aimed story level, it’s a clever means to not only meld with the videogame franchise, but show how people (or cartoons) deal with loneliness. Robotnik and Sonic suffer because they’re different; one makes an effort to fit in, the other only sees a way to bolster his ego. Even someone/something as commercially “cool” as Sonic struggles to find his place. What matters is Sonic keeps trying. Robotnik gave up forever ago when the US military wanted his drones.

Dropping this into a template, James Marsden again stars against a CG animal (Hop before this), the routine tirelessly adhered to. The shock meeting between human and alien, the question-and-answer period, a disagreement, and eventual reconciliation during the action-laden finale. E.T., minus the heart. Instead, it’s chili dog farts.

Routine plotting though is likely the best case for a live action Sonic the Hedgehog. When Sonic interacted with humans in videogames, the bizarre, stilted, awkward anime influence never worked. Arguably, those attempts represented the lowest points in Sonic’s interactive career (one with countless quality fluctuations).

If nothing else, it’s enthusiastic and hyperactive. That fits. Sonic the Hedgehog sparked to life in the early ‘90s, and this movie’s pacing mirrors some outlandish pop culture from that period. There’s little time for anything substantial, making Sonic spend much (too much) of his screen time explaining obvious events, or spilling another one-liner. Best guess: The writer’s room consisted of a betting pool as to which lines made the trailer.

Assuming the Sega/Nintendo war, which made Sonic necessary in the first place, continues now, that means Sonic the Hedgehog goes up against Detective Pikachu. Like then, both stand as distinctive – Detective Pikachu slow and ambling, marching to its own pace, Sonic the Hedgehog the boomy teenage spokesman in a constant rush to do stuff. Any stuff. At least that stuff finds merit. 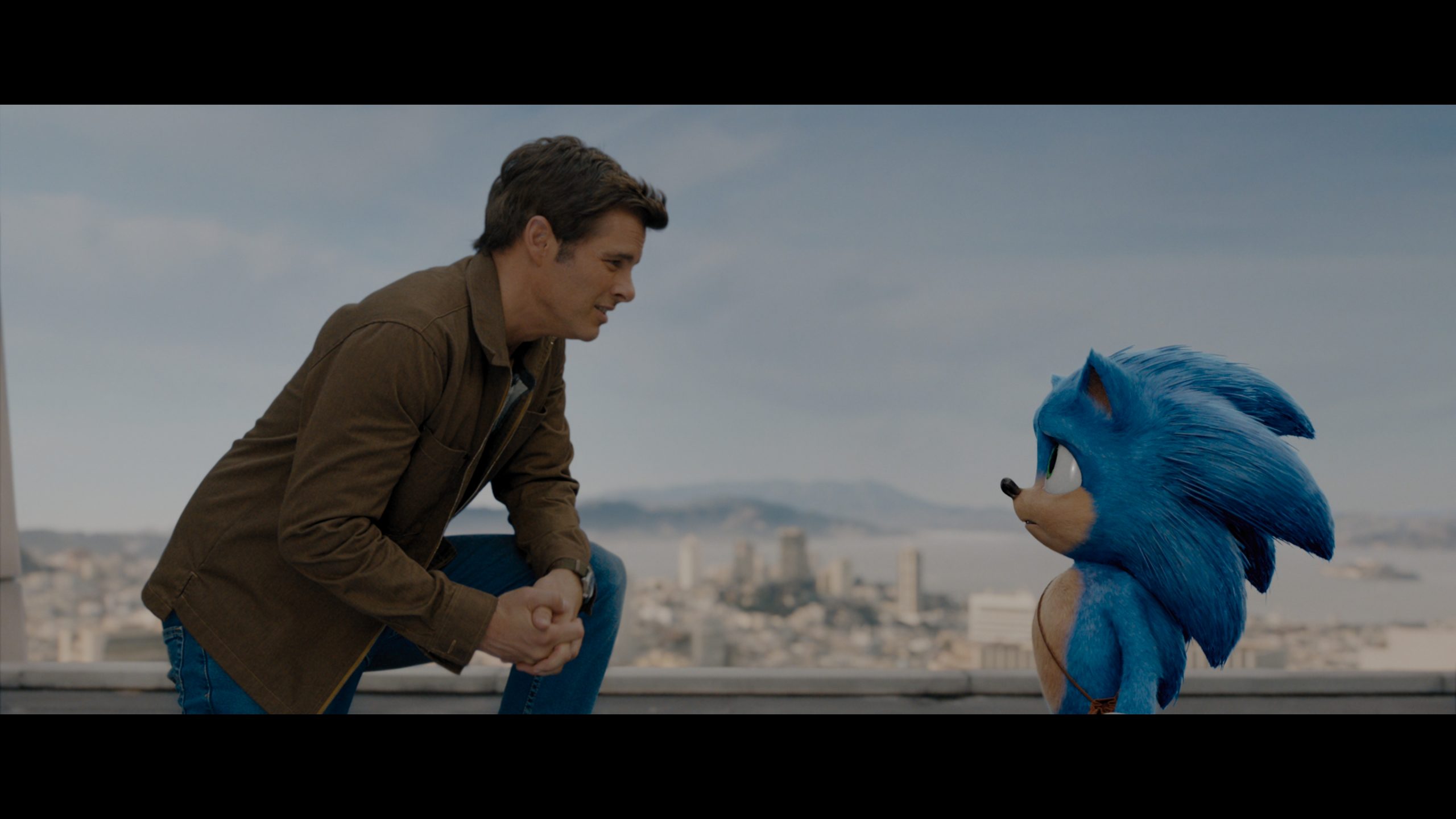 In general, Paramount’s UHD brings along appealing digital video. Minuscule noise butts heads with visual effects, too marginal to cause degradation. Clarity holds to a high standard from the outset. This means maintaining stability against well saturated color, often favoring (a bit much so, at times) an orange tint.

Sonic himself challenges the resolution to define his many hairs. The end result pleases. Texture all around delivers, presenting excellent environments, exteriors, and close-ups. While not exceptional or outstanding, there’s enough energy to appease the video-centric.

Problems surround the Dolby Vision pass. Black levels look spectacular, so it’s not shadow depth. Rather, highlights. Those look dimmed, washing out contrast and creating a flat baseline the entire movie adheres to. Things like spotlights or drone lasers lack intensity. Even explosions muddy, unable to reach a peak that screams “HDR.” Whatever gains the UHD makes over the Blu-ray, they’re lost in this mediocre effort.

Nothing is spared in the low-end. Sonic the Hedgehog brings layers. Robotnik’s truck hums when it passes. Sonic counters, delivering awesome jolts from his EMP ability. Missiles and fireballs erupt, bringing stellar low-end power. Strength and variety test consumer-level equipment, like any big-budget studio production should.

Discreet use isn’t quite as fancy. Fun, active, and blended well, if fighting against the manic action. Sonic darts around at such fevered pace, trying to keep up is impossible anyway. When locked into a moderate pace, the mix shows off thanks to pleasing debris fields, drones zipping overhead, and small touches. Listen just prior to the end credits as a heavy rock is thrown, landing in the rears. Same goes for gunfire, panning across the fronts and rears during an attic encounter.

Head to the Blu-ray – it’s all on there. A commentary comes from director Jeff Fowler and Sonic’s voice actor Ben Schwartz. Five deleted scenes offer an optional intro from Fowler. Bloopers follow, as does a fun look at Schwartz’s typical day. The rest deliver EPK material, aside from a brief look at the Sonic franchise and its origins. That runs a little over six minutes.

Likely the best outcome for a live action Sonic the Hedgehog movie sticks to safe, proven formula and mild humor.