Bloodshot considers the ethics involved in bringing dead soldiers back to life, giving the undead superpowers to make them nigh invincible. These soldiers are built by Rising Spirit Technologies, the name patriotically suggestive, and eventually, revealed as moral-less villains.

Rising Spirit spent $1 billion developing this technology, so says Bloodshot. Maximizing revenue means wiping out corporate defectors, or having the reanimated Vin Diesel do it for them. Consider, though, what Bloodshot doesn’t – a company willing to spend billions, anticipating a profit. This never happens without a buyer. That buyer is the American military. Bloodshot skips that piece however.

In action, Bloodshot only wants to act as testosterone-dripping wish fulfillment. Opening scenes pan down on a generic Middle Eastern town, seared with an ugly yellow filter. There’s no other context – it’s just Vin Diesel in a stock Hollywood scenario emboldening wartime fervor. Everything in Bloodshot is surface grade, numbingly violent to PG-13 extremes, and rarely creative in its CG-soaked outbursts. Army Man Breaks Stuff is the more apt title.

Taken as an outrageous, comic book fantasy, Bloodshot represents an evolution in military publicity. For 100 minutes, the look and feel conveys a technological enthusiasm mirroring TV ads showing soldiers piloting drones, satellites, and futuristic-esque methods. Diesel’s new powers let him punch people through cars, destroy walls, and take bullets to the face without flinching. He’s a videogame character in a cranked up war, based in rudimentary sci-fi ideas, that become ever more plausible in time.

There’s one visually arresting scene in Bloodshot. In a tunnel, lit primarily by flares, Diesel crashes a truck loaded with flour (?), covering the action, adding kineticism to each motion, doubly so in slow-mo. At least it’s splashy and energetic, plus mostly practical. As the runtime closes in on the credits, Diesel’s powers increase, and digital effects take hold. Bloodshot loses its hyper reality for something aggressively absurd.

Sliding down an elevator shaft, the finish caps a brief, uneventful ethical debate. Bloodshot isn’t the type to engage in extended dialog, yet Diesel’s gruffness fails to convey the magnitude in such limited time. How few people resist seems implausible, or maybe a soft commentary on how the drive to make a better, more obedient fighting force is acceptable no matter the scientific integrity. The latter only applies to movies that care though; Bloodshot clearly isn’t one of them. 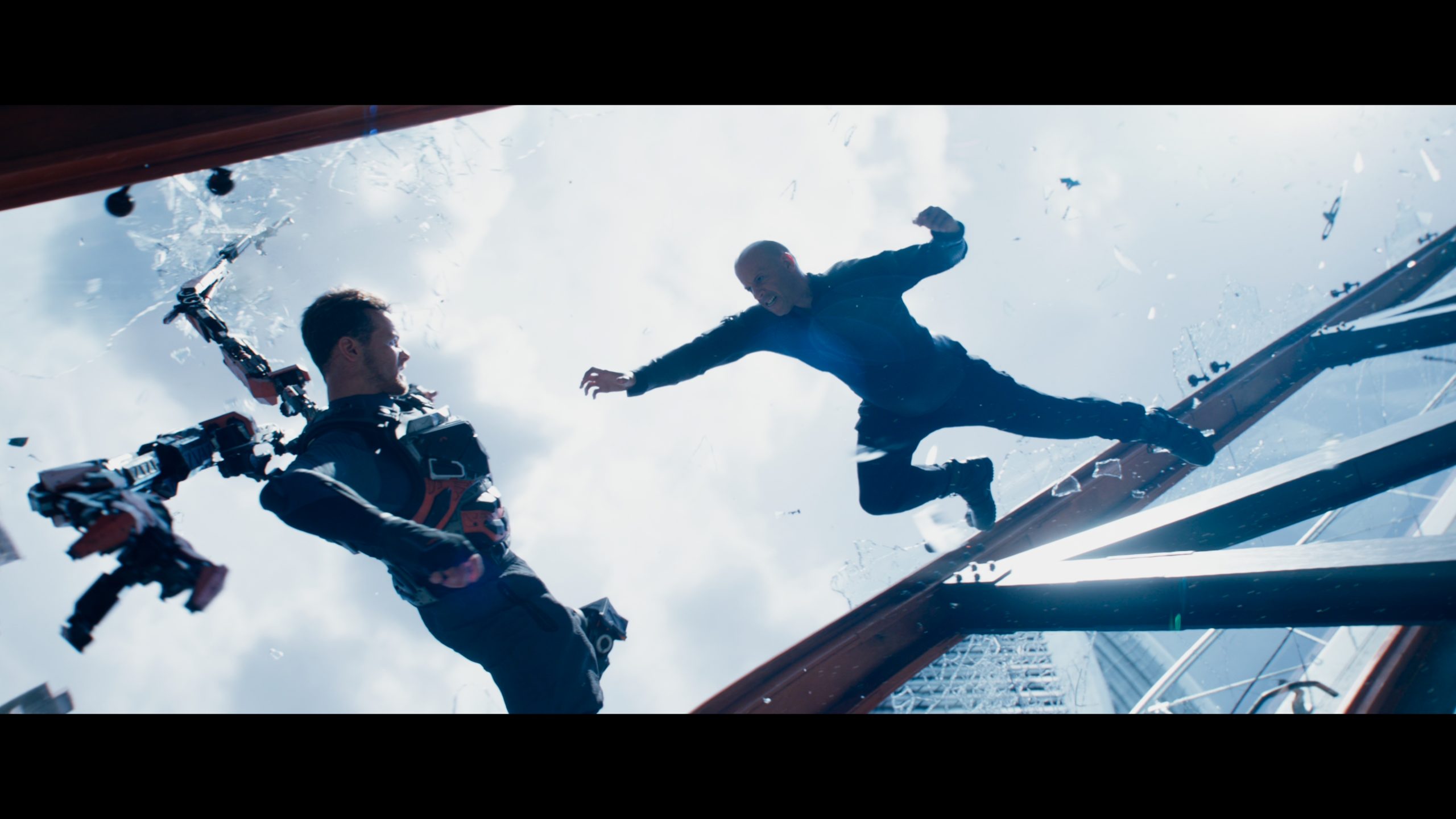 In spite of a smaller-than-average file size, compression holds its own. During the tunnel fight, extreme reds and blues clash, both asking for an artifacting breakdown; that never comes. Impressive work.

No LFE was wasted in designing this mix. Powerful range sells punches and gunshots. A crashing truck finds a target point at the lowest end. Bloodshot exists in the pure action spectrum, testing equipment limits unapologetically. Destruction and explosions punch up the already mighty Atmos track.

Also excellent, positional effects sustain movement throughout. Debris washes over with convincing accuracy. Cars and motorcycles pan past effortlessly. Inside the tunnel, each sound echoes out, filling the space. Smaller touches like Diesel’s voice coming from a PA system in the heights shows an attention to detail.

The UHD holds a few deleted scenes, along with an alternate ending (and optional) commentary. Over on the Blu-ray, those same cut scenes, along with a short blooper reel, director featurette, and a piece on the cast. All together, it’s barely a half hour total, with no substance.

Bloodshot doesn’t want to consider the ethical quagmire behind its story, so aims its attention on hokey action scenes instead.