For Life, or Just One More Sequel

Bad Boys for Life comes close to a revelation. Rather than rely on the destruction and macho bravado of Will Smith and Martin Lawrence, this entry brings in a super CSI team, under the ridiculous moniker AMMO. The idea is that drones, technology, and computer smarts reduces Bad Boys’ need for sensationalized violence.

But by the end, even the CSI team goes guns blazing. Nothing changed, nothing learned.

Smith and Lawrence are both older now, over 50. Too old to dive and shoot, take punches, and survive crashes, to this degree anyway. Lawrence is still belittled for avoiding fights and daring to be a family man who drives an SUV. Smith is then celebrated for bending the rules, killing, and looking cool while doing it. Bad Boys for Life doesn’t grow these characters, even if their crude caricatures belong in the mid-’90s.

Bad Boys for Life is embarrassingly simple, led entirely by charisma and pace

If time gave the duo anything, it’s faultless comic timing. While too much humor derives from Lawrence’s timidness, Bad Boys for Life keeps quips flowing at a steady pace. The script comes from first-time series writers who lock on to the formula. In that sense, it works. Agitation and frustration let loose, if never enough to override friendship. That’s Bad Boys’ central hook; to lose that is to lose the series. Bad Boys for Life doesn’t relent.

Nor does Bad Boys for Life alter the thematic concerns. The original movie escalated the ‘80s action formula, which now looks akin to genre parody. Glossy glorification of violence and endless “cool” gives set pieces a time travel vibe – as if producers scrounged this footage from something decades old. And again too, social contrast is used in the core conflict, with Mexico introduced in a underlit prison basement, and eventually, the source for any murders. In comparison, Miami’s saturated skyline and sizzling nightlife is endlessly paraded. Then, the finale, set in what amounts to ruins down south, to cement the visual superiority.

In seizing on a revenge motif, Bad Boys for Life tapers down a little. All these drive-bys, car chases, and body counts happen as both sides grow ever angrier. A richer, more reserved action movie caters to that idea. This series doesn’t operate on such subtleties though. No one ever accepts fault or acknowledges the harm they caused. It’s embarrassingly simple, led entirely by charisma and pace, as to not give anyone time to consider the outmoded context. Although hilarious together, hopefully the Smith/Lawrence team aged out of these parts. 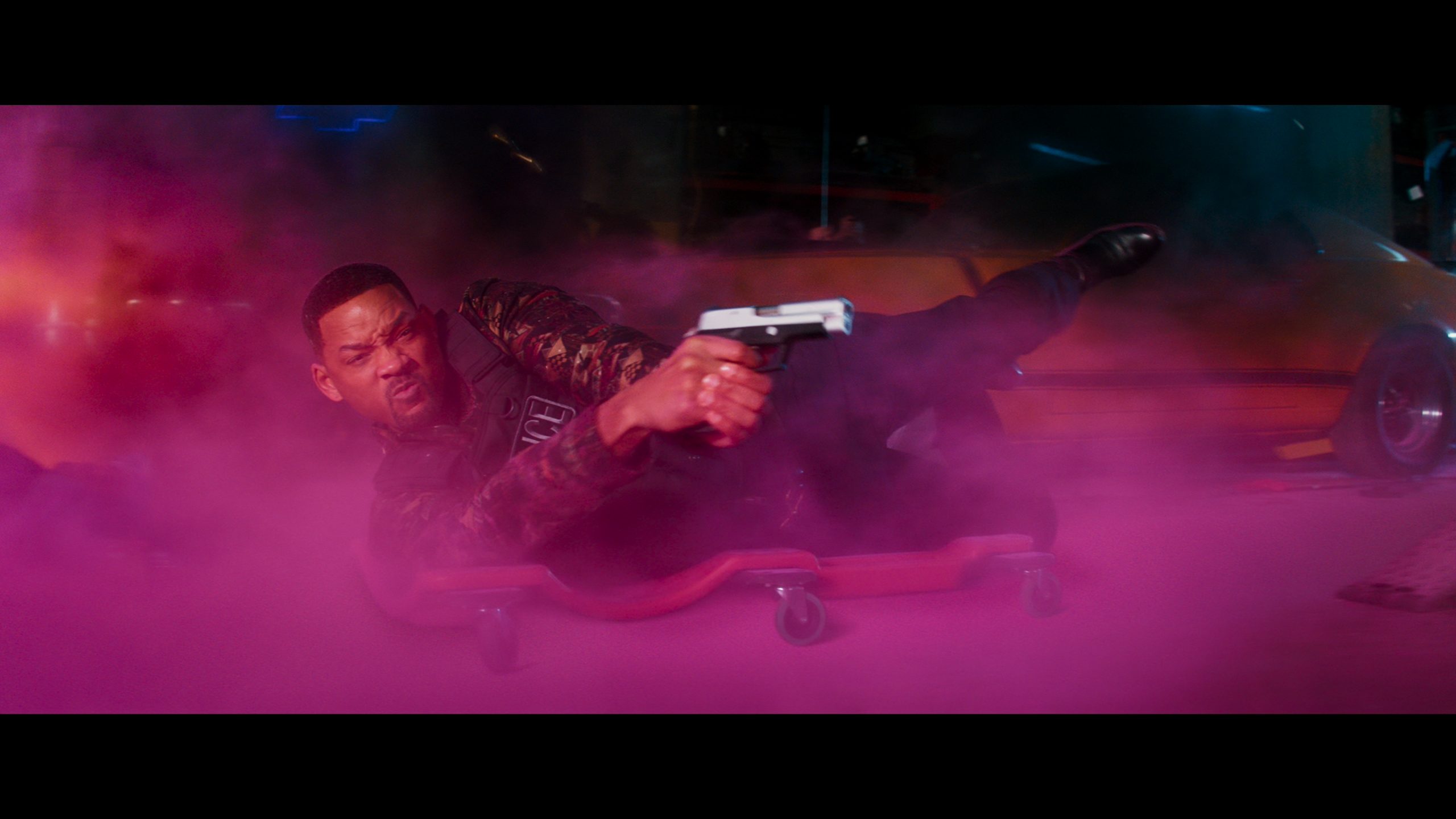 To clarify, detail reaches exquisite tiers. Digital cinematography pushes facial definition to reference levels at times. City exteriors and aerials create a definite glamour, even if a few stock shots succumb to aliasing. No noise seeps in, keeping imagery pure and clear. The IMAX enhanced stamp doesn’t hold much esteem to date, but other than questionable smoothing in an early hospital scene, Bad Boys for Life avoids the pitfalls.

In keeping true to the first two, color swells with warmth. That’s not a negative – primaries don’t lose their grip to this post-production grading. Miami’s waters probably don’t look this blue in real life. Flesh tones hold their own, admittedly warmed, if not egregiously. Not to be repetitive, but again those neons lining beaches at night spare nothing in their variety.

Other than the final act, height channels stay unusually quiet. Such bombast invites their use, but until the vertically-focused finish, there’s little to go around overhead.

Allowing for that loss puts this DTS:X track at expected levels. Surrounds engage constantly. Bullets zip by, and travel the soundstage. Expert precision misses nothing, utilizing the width to give this track flawless results.

Pedestrian material includes a funny gag reel, marginally interesting deleted scenes, the 14-minute EPK Ride or Die, a short look back at series and this sequel titled It’s About Damn Time, with easter eggs and stunts given time next. Partners in Crime splits into a trio, with the heroes, villains, and directors given focus.

Hampered by outmoded style and themes, Bad Boys for Life still produces the most entertaining comedy of the series, if little else.