Rogue One makes A New Hope better. That’s not something often said for such prequels, in any form.

Leading into A New Hope with Rogue One’s fatalist story only strengthens the tension already evident in the original Star Wars series. Here in Rogue One, the Empire shows more control. The oppression and desperation outside Luke Skywalker’s view pushes fascism’s hold.

Troops in tanks wander through marketplaces, a PA system bellowing propaganda messages. Civilians endure unnecessary seizure merely for standing in the street. And, instead of following a Darth Vader, there’s Krennic (Ben Mendelsohn), a forgotten lackey who desires power as his own ego transforms into incompetence. It’s a masterful touch to preface Governor Tarkin’s own downfall for similar reasons.

Rebels strike back against the Empire, doing so in a disorganized, crude way. It’s all they can muster when the Alliance admits defeat. Some people cannot afford such caution, thus making up Rogue One’s central heroes. Unlike the mainline films so focused on fate and Jedi powers, Rogue One finds itself giving nobodies the chance to fight. Their will – not destiny – overcomes, and then costs them everything. But they know that, and charge in anyway.

Han Solo eye-rolled when first considering the Force, demeaning it as a “hokey religion.” Through Chirrut Imwe (Donnie Yen), the Force becomes that religion, but not hokey, so much as one steeped in eastern philosophies. Imwe’s blind monk-like personality and unflinching trust in his beliefs becomes more than an ability to wield a lightsaber or choke people from afar. It’s an assurance that greater power protects us all, not only those with specialized skills and training. Rebels fighting above the planet, those on the surface; all of them can harness the Force, treated in Rogue One as a deity, bettering Star Wars’ lore.

Early in Rogue One, responding to Krennic, Galen Erso (Mads Mikkelsen) notes, “You’re confusing peace with terror,” the opening salvo that defines the war following Episode III. Democracy is lost, along with any hope of ever keeping it. That’s Star Wars’ world as Rogue One begins, the segue to Skywalker, Vader, and Palpatine. Those films arguably look grander and command more scale, while Rogue One convincingly conveys the sacrifice required, even by outcasts, to make those stories possible. Heroism is always inspirational. Rogue One though scales that down to actual rebels – prisoners and outcasts who represent the whole, not the few. Authoritarians never acknowledge such a threat. 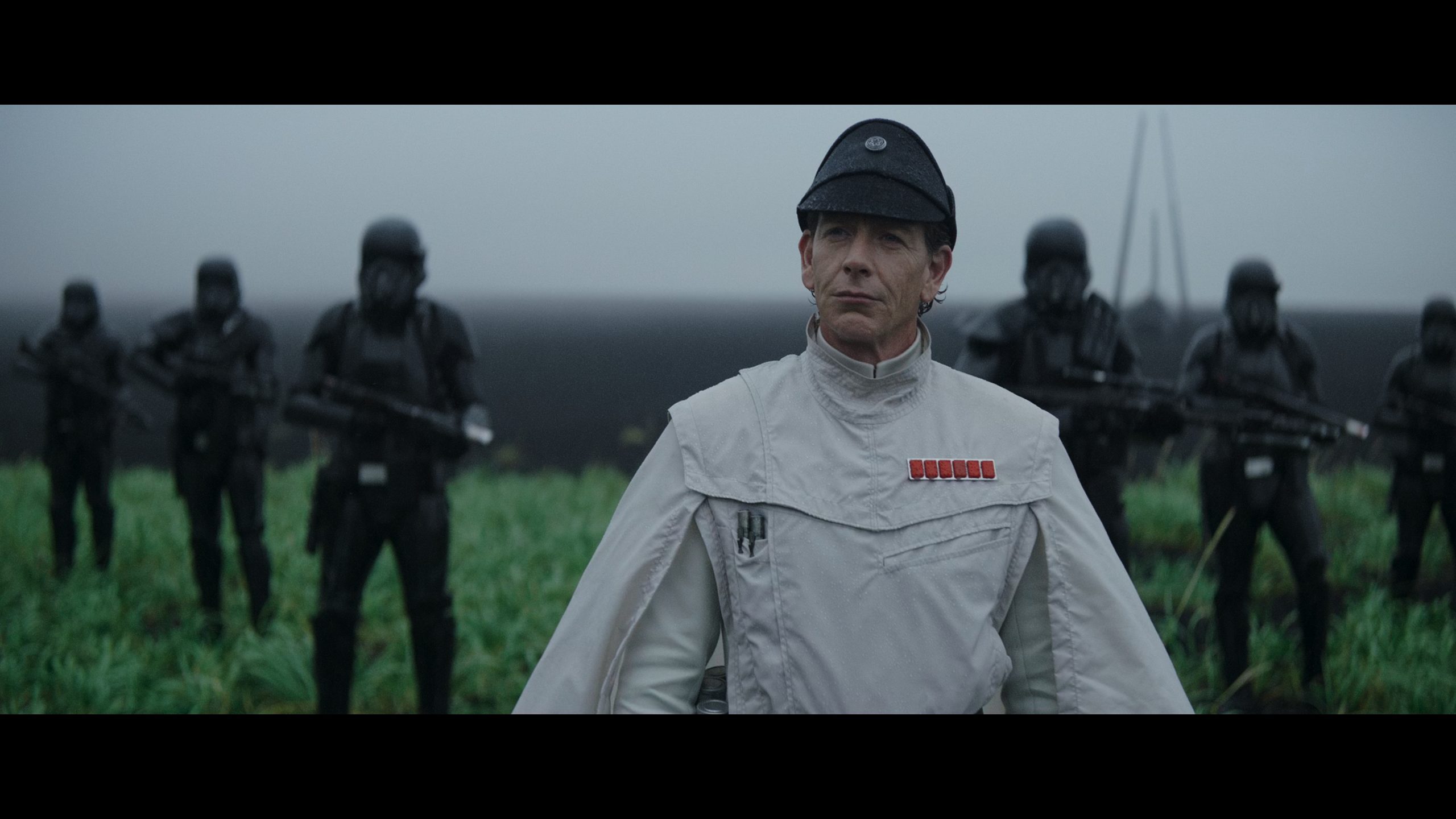 Mastered at 4K, that’s evident early. Rogue One delivers the greatest sharpness of any Star Wars 4K discs so far (assuming no remastered editions come in the future). Although slight ringing impacts a few shots, Rogue One is given an all clear. Digital cinematography carries a light, flawlessly resolved grain structure. It’s convincing enough to believe this was shot on film.

While muted, the deep color doesn’t lessen its hold. Earth tones early and dense blues later give each planet a unique aesthetic. On Scarif, gorgeous blue water and lush palm trees bring out the best in this palette. Even the space scenes above track the same, with a bright shield, explosions, and sunlight aplenty.

Sadly, Dolby Atmos takes Disney’s usual form here. Range never catches on. Low-end doesn’t dig in, truly disappointing as the Death Star strikes. The ensuing earthquake rumbles, just meagerly. Grenade blasts, rocket launches; all of it fails. Given how great the other Star Wars discs were in this regard, this one’s a bummer.

In the upmix, height channels find a little work. Debris fields exhibit some stretch into overheads. A ship or two pans by too. Everything else sweeps through the soundstage as well as before, utilizing each channel. Separation isn’t subtle.

Meh. While the 10-part feature The Stories runs an hour and seems beefy, it’s mundane. Production values cover a routine, corporate-leaning bonus. No mention of the reshoots or any behind-the-scenes struggles. The only other bonus is Rogue Connection, spending four minutes pointing out series connections and crew cameos.

Rogue One: A Star Wars Story

One of the best of all Star Wars films, Rogue One brings the franchise’s themes, style, and philosophies to the forefront.