Two classic comedies from Ealing Studios by director Alexander Mackendrick (Sweet Smell of Success) are smartly packaged together by Film Movement Classics. British laughers Whisky Galore! and The Maggie (originally released as High and Dry in the US) represent a hallmark for post-war comedy in Great Britain. Dabbling with an uproarious clash of cultures to excellent results, Mackendrick returns to his Scottish roots in both films.

Whisky Galore! adapts the novel by Compton Mackenzie. Set in 1943, the tiny island of Todday is floundering. Its hearty citizens are at a loss when the island runs dry of whisky due to the ongoing war. The locals begin scheming for a cargo ship’s stash of 50,000 cases bound for America when it gets stuck near their shore. Inspired by true events, the locals break out in happiness when their crazy plan works and whisky returns. This was Ealing’s first comedy shot on location and went far over budget, ultimately cleaning up at the BAFTAs with several awards.

The Maggie is a delightfully warm and zany comedy about an American businessman’s valuable merchandise getting mistakenly placed on a local puffer boat on its last legs. ‘Maggie’ is a small puffer boat that chugs the Western Isles of Scotland. Her unassuming but sly captain, about to lose the boat over mounting debts, takes on cargo from an uptight businessman named Calvin Marshall. Delightfully played by Paul Douglas, Marshall tangles with the boat’s amusing captain over the safe passage of his cargo.

Emblematic of Ealing Studios’ signature comedic brand after the war, Whisky Galore! and The Maggie embrace post-war class differences as a driving force and a healthy appreciation of working class folk causing mostly harmless mischief. Each movie has its charms, though the lead performance by Paul Douglas as a gritty American gives The Maggie a decided edge in actual laughs. Prepare for a few lines lost in translation unless you have an uncanny ear for rough Scottish accents.

Comedies often don’t work past their own era as cultural changes undercut some jokes while others are lost in meaning. There’s a warm approach to the ensemble of lovable characters that gives Ealing Studios’ comedies a grounded approach that still resonates today. An inviting, rich tapestry of colorful characters, getting in over their heads, each movie provides laughs without the mean-spirited edge of today’s cynical comedies. 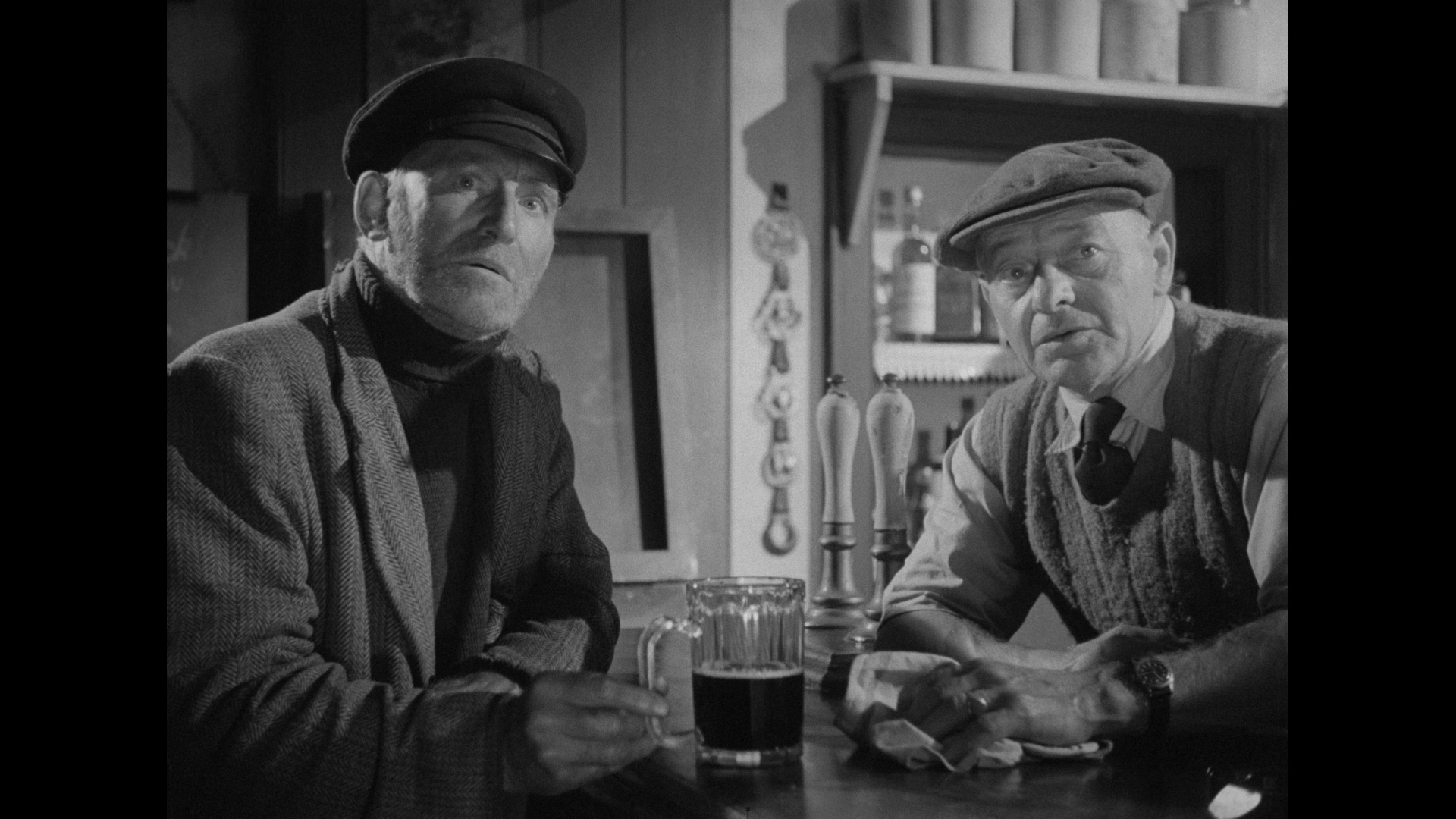 Film Movement licenses both HD transfers from StudioCanal, derived from transfers made ten years ago for the UK market. The British films, both in black-and-white, receive adequate 1.37:1 presentations. No one will confuse either presentation as state-of-the-art film scans, though both are respectable transfers from extant elements.

The Maggie’s 1080P video has crisp definition and real texture, nicely situated with an even contrast. Sourced from clean elements in fine condition, it is a dramatic improvement over the much softer Whisky Galore!, looking worse for wear with muddy black levels and more degraded film elements.

Each movie gets its own BD-50, allowing generous AVC parameters to perfectly reproduce each movie’s original grain structure. Neither film transfer demonstrates heavy-handed processing. Both are film-like with appropriately cinematic presentations. Whisky Galore!’s poorer picture quality reflects the difficulty of a laborious location shoot for Ealing Studios that ended up running well over budget.

Both movies are heard in 2.0 PCM, reproducing their original mono soundtracks. Whisky Galore!’s audio is on the thin and raspy side. Being Ealing’s first film shot on location, recording quality is rougher than expected. Interiors fare better than exteriors on dialogue.

By comparison, The Maggie shows improved fidelity and a cleaner soundstage. These are serviceable sonic presentations with all the limitations of British filmmaking made soon after World War II.

Neither film includes subtitles, somewhat disappointing considering all the thick Scottish accents heard throughout both films.

Film Movement puts together a classy set for this double-feature of comedies from Ealing Studios. They pull existing documentaries and interviews from the DVD set released over in the UK by Optimum Releasing. The 16-page illustrated booklet has a new essay written by film scholar Ronald Bergen covering the two films. The Maggie doesn’t receive any specific video supplements, all attention is paid to the more popular Whisky Galore!

The two-disc set comes in a normal-sized BD case. A flyer for other Film Movement releases is included. There is an interview with Hilary MacKendrick only found on the Region B Blu-ray.

Distilling Whisky Galore! (54:18 in SD) – A lengthy, behind-the-scenes exploration of the film, featuring interviews with director Alexander Mackendrick and other crew members.

The Real Whisky Galore! (20:36 in SD) – A fascinating featurette, interviewing an elderly Scot named Angus Campbell who actually lived during the original events that inspired the movie. Prepare for a very thick accent.

The Titfield Thunderbolt Trailer (01:00 in HD)

The 15 unaltered images below represent the Blu-ray. For an additional 31 The Maggie screenshots, early access to all screens (plus the 100,000+ already in our library), 100 exclusive 4K UHD reviews, and more, support us on Patreon.