The Song of Names is a sweeping historical drama over several decades with a masterful score from composer Howard Shore, directed by François Girard (The Red Violin). Starring Tim Roth and Clive Owens, the earnest tale is about the close bond of two boys growing up together in London, one an enormously talented prodigy from Poland that had to leave his Jewish family behind during the Holocaust.

Filled with musical touches, a mystery develops that stretches over decades. When the violin prodigy from Poland disappears on the eve of his first public performance in 1951, his adoptive English family is heartbroken. Nearly forty years later, the English friend goes all over Europe looking for his former friend against the advice of his wife.

… music from Hollywood composer Howard Shore is the real attraction

Tim Roth stars as Martin, an English boy who grows up alongside Dovidl Rapoport, a Polish Jew taken in by Martin’s family during World War II. Dovidl is a gifted virtuoso at the violin, considered a musical prodigy. Recognizing this genius, Martin’s father gives Dovidl a home and financial support for his gifts. The two boys grow close while the world lapses into war. Dovidl loses contact with his family in Poland during the Holocaust, growing resentful of his Jewish identity.

The narrative is constructed around an adult Martin, now decades after first losing contact with Dovidl, discovering a thin clue that may lead him to answers about his long-missing friend. His investigation will lead him to Poland and back.

The Song of Names is moving and approaches its characters with heartfelt sincerity, exploring the Holocaust’s aftermath with care. The classical music from Hollywood composer Howard Shore is the real attraction. Clive Owens gets a smaller role than his leading man status indicates and doesn’t comfortably slip into an adult Dovidl’s shoes.

The central mystery of what happened that fateful night back in 1951 receives too much attention in the mystery. The Song of Names is much better when showing the flashbacks to their childhood together in London, comforting each other in the face of tragedy.

The story of two close childhood friends from different backgrounds, and how those backgrounds affect them as adults, The Song of Names is filtered through a reality of the Holocaust and its terrible legacy. There are flashes of brilliance, mostly musical in nature, and flashes of uneven melodrama. Serious filmmaking with an eye on award season, the characters are interesting enough on their own to make you forget the film’s small problems. 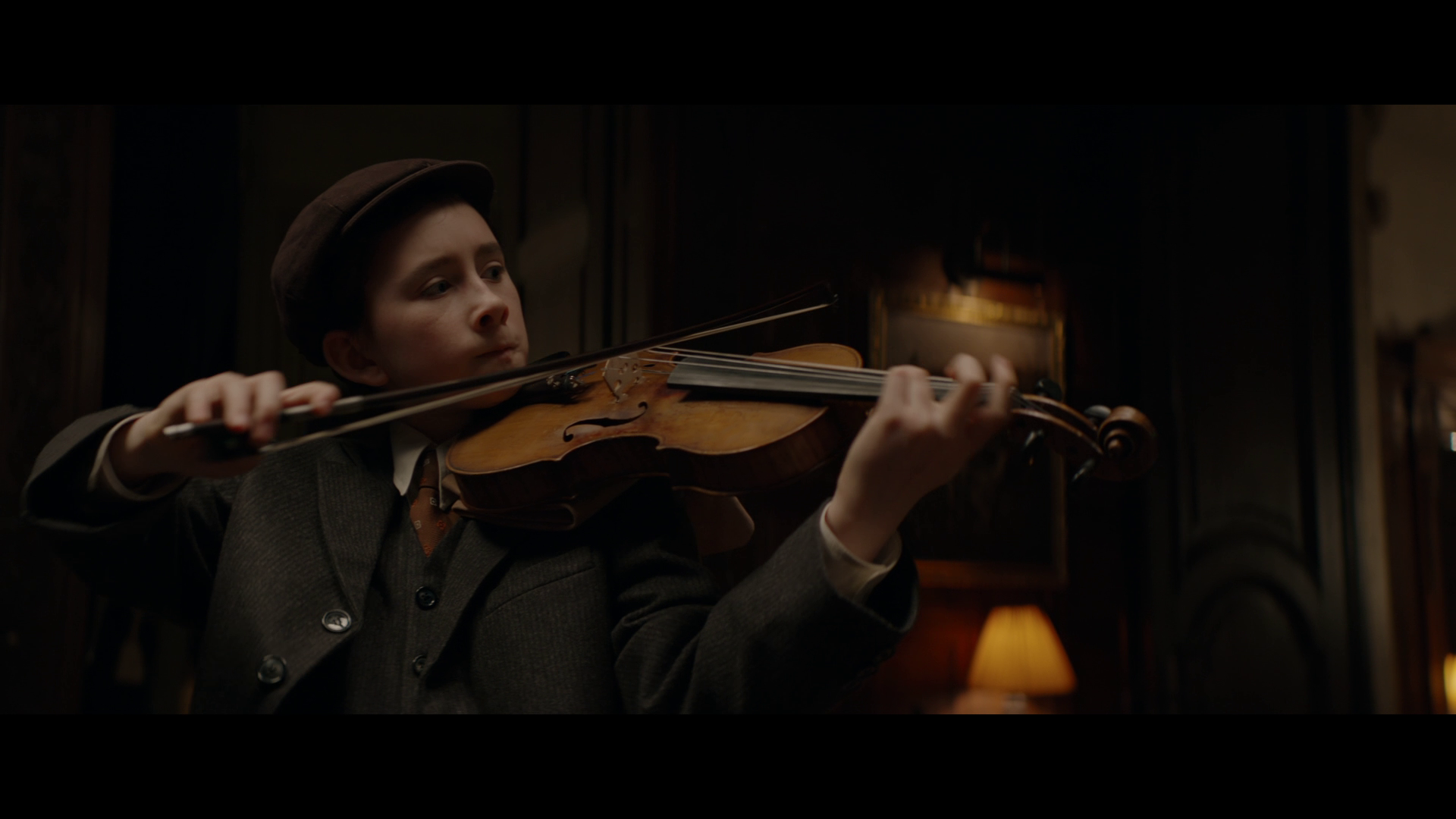 Elegantly refined cinematography by David Franco looks nigh perfect on Blu-ray. The Song of Names is a carefully filmed 2.40:1 presentation, radiant with amber tones and razor-sharp definition. The digital transfer by Sony is immaculate, neatly capturing the 1080P video’s crisp textures and extravagant detail.

The AVC encode isn’t granted particularly generous parameters on a BD-25, one failing of Sony’s MOD program. Nevertheless, this is top-notch picture quality struck from a pristine digital intermediate.

Black levels are deep and inky. The ripe contrast allows for a wide range of highlights and shadow detail. Hats off to the digital colorist, subtly changing tones and lighting for each depicted period without going overboard. Colors are slightly restrained, mildly under-saturated.

A beautifully fluid and smooth original score by composer Howard Shore is the highlight of this expressive 7.1 DTS-HD MA soundtrack. Resonating with a haunting violin performance from noted performer Ray Chen, the instrumental music is heard with effortless high frequencies and a tight mid-range. Howard Shore personally invested a lot of time and effort into The Song of Names, possibly hoping to score an Oscar or two. The hard work pays off for anyone that appreciates the subtle tones of a violin. It’s a masterful score, full of stirring melodies and a haunting mood.

The surround mix is wonderfully integrated across the soundstage with delicate placement and spatialization. The dialogue-driven drama’s audio becomes more immersive during the World War II bombings of England and city life. The score and violin music plays a critical role in the movie. It’s heard in relaxed dynamics with quiet intensity and pristine clarity.

Released as part of Sony’s Made-On-Demand program, The Song of Names arrives on a pressed BD. A few special features are even included.

The Song of Names Theatrical Trailer (02:14 in HD)

Sony Classics Trailers (10:08 in HD) – Playing before the main menu and able to be chosen from the special features menu, trailers for Never Look Away, Pain And Glory, Frankie, Norman and The Climb are included.

Behind the Song of Names (07:34 in HD) – Director François Girard, actors Tim Roth and Clive Owens, and author Norman Lebrecht are interviewed in this behind-the-scenes featurette that serves as a reasonable guide to the movie.

The Song of Names

Tim Roth and Clive Owens headline in this sentimental Holocaust drama that takes decades for its mystery to be solved.

The 15 unaltered images below represent the Blu-ray. For an additional 38 Song of Names screenshots, early access to all screens (plus the 100,000+ already in our library), 100 exclusive 4K UHD reviews, and more, support us on Patreon.