Missing from the original Star Wars trilogy and these modern sequels is a sign of what everyone fights for, rather than what they fight against. Under the Empire and New Order, life stopped, except for those few profiting from the conflict. Rise of Skywalker travels to a festival, lavish in color, dance, music, and children watching stories unfold. Culture and life explode around Rey (Daisy Ridley) and her resistance friends. This is what can be if they win.

Rise of Skywalker also shows how totalitarians operate. On a hunt for clues, a limp plot device amid a wide-reaching finale, First Order troops go door-to-door. Fear rules. Families beg for mercy. One citizen steps onto their porch, and quickly retreats when they realize what’s happening. The contrast is stellar – what can be if you fight, and what is if you don’t.

Over three trilogies, fascism rose, it died, and rose again. People in power always want more, but people joining the resistance do not succumb to fear. History would remember Star Wars’ rebels and resistance well.

Patchwork scripting brings the series together in its send-off; forty years of pop culture, lore, fandom, and geekdom collide here. Inconsistent, but at least aligned with Star Wars’ overarching themes. Fate does not make us, families (direct and indirect) guide us, and those in power do not define us. Rey’s struggle with her identity encapsulates these feelings, her strength great enough to overcome her past. She’s a character representing future generations of freedom fighters, establishing herself, while paying homage to those before her. Amid cameos and respectful nostalgia, Rey capably makes this trilogy her own.

The twist then is Palpatine, surrounded by devoted cultists who still claim allegiance to the Empire. In Star Wars’ fantasy, his return is plausibly foreshadowed. More, Rise of Skywalker shows how the frightened downtrodden relent to those “above” them. It’s another connection to World War II, disguising Hitler’s totalitarian zenith with lightning, lasers, and spaceships. Like The Last Jedi, which rejected affluence, Rise of Skywalker equally scrutinizes the now, warning of manipulative leaders seizing authority from their growing influence.

As the ninth movie in the core series, Rise of Skywalker doesn’t pause often. If anything, it’s breathlessly rushed in preparation for the spectacle to come. That imprecision comes at a cost to depth (and tossing aside characters like Rose), but in envisioning what heroism and bravery can achieve, no other film in the series actualizes this scale. Rise of Skywalker, missteps in direction aside, is what pop culture parables deserve to be. 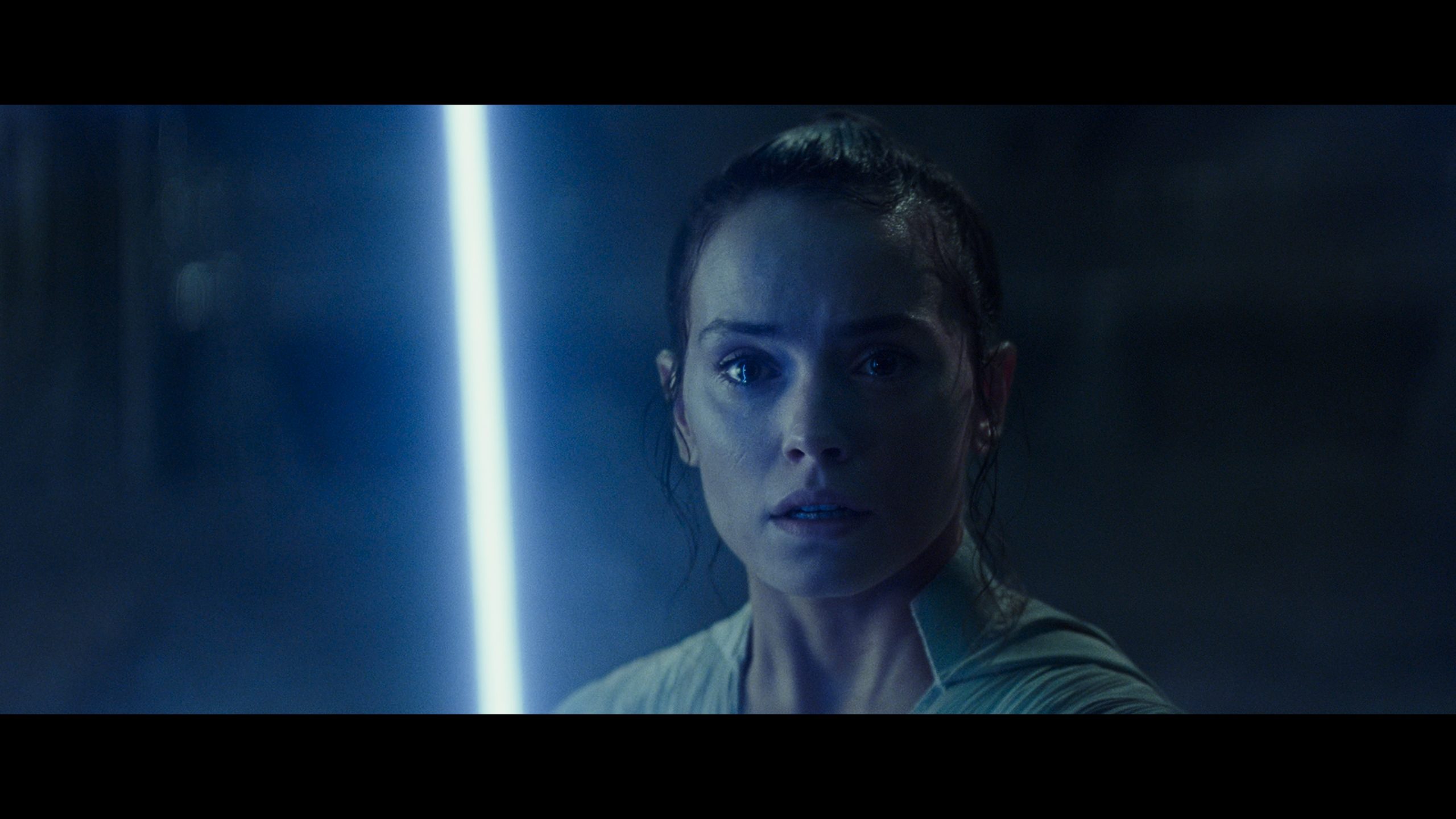 Shot on film and mastered at 4K, the disc doesn’t necessarily reach the expectations. Grain is a concern. Not in the sense that grain is there – that’s great – rather the low-quality and grittiness that often defines it. Were this an older catalog release, the equivalent is an earlier, less precise mastering process. Yet, Rise of Skywalker is brand new. There’s no reason the film stock appears this harsh so often. At times, 35mm is accurately represented. Then, grain carries 16mm’s typical weight. The disc’s file size indicates there’s enough space given to the encode. Compression isn’t the issue.

This isn’t a mess or a disaster. Rise of Skywalker often looks fantastic, sensational in fine detail and rich in fidelity. Close-ups draw out the best textures. Wide shots find their comfort zone without issue. Say, the deserts, or the waves crashing down near the second act’s close. Star Destroyers by the hundreds exhibit zero aliasing. Sharpness doesn’t waver, just the grain. Digital color grading brings numerous palettes into view, superbly rich during the festival, balanced when on the hunt for 3PO’s stored information, and deeply blue when reaching Exegol.

Although the theatrical presentation used Dolby Vision, Disney opts for HDR on UHD. Mirroring The Last Jedi to an extent, black levels still lack density, a midpoint between Force Awakens‘ dimension and Jedi’s lack thereof. Depth is appreciable, if not totally pure. That’s noticed right as the text crawls against the starfield. Highlights intensify at least, charging lightning bolts, reflective metal, and lightsabers with definite might.

While the Dolby Atmos track seems okay at the start, soon the LFE loses its range. It’s Disney, after all. Bass never feels full enough, even with a volume increase. Expect menial response during tidal wave-like waters. Massive as the finale is, from explosions to falling ships colliding with ground, lackluster low-end robs Rise of Skywalker of its scale.

As a consolation prize, active mixing keeps audio whipping across the soundstage. Height channels keep pace with the rears, dazzling in their ability to track countless vehicles and ships. Striking ambiance wastes nothing, whether bold, reverberating voices or chants from the cult. Lightsaber duels pan speaker-to-speaker, effortlessly mixed, in-sync with the choreography.

On the bonus disc, the superb Skywalker Legacy documentary runs two hours. This uses a framing device that connects to the full franchise. It’s congratulatory in tone, but classy.

Featurettes follow. Behind-the-scenes of a chase scene runs 14-minutes. The festival gets six minutes of focus. O-C’s lore and ship are explored for five and a half minutes. In an all-too-short but loving tribute, Warwick Davis is given his due. An overall look at creatures runs just under eight minutes.

While sloppily composed at times, Rise of the Skywalker celebrates the themes, style, and action of this series with proper gusto.