Return of the Jedi ended with Emperor Palpatine falling to his supposed death and Darth Vader’s remorseful send off; The Force Awakens begins with a starship blotting out an entire planet’s light. All the rebels fought for was lost. After the Empire’s fall came The First Order, furthering the fascist cause, and leading to this apex in their power.

Unabashedly, The Force Awakens remakes A New Hope. Why these events reoccur is Force Awaken’s warning – complacency doomed a galaxy. Han Solo (Harrison Ford) retreated from the rebellion, returning to his smuggling days. Luke Skywalker went into hiding. On planet Jakuu, Rey (Daisy Ridley) scrounges for parts amid the Empire’s scraps. This is normal. This is life, and how people live. Comfort zones provide a cushion away from conflict. If the Empire’s fall was of no help to those destitute on Jakku, why resist?

In that time, the First Order hardened their power. Opportunists, all of them. Stormtroopers are admonished for removing their helmets, lest anyone reveal individuality. Questioning First Order authority means being reconditioned. And like most authoritarians, their leader Kylo Ren (Adam Driver) projects his insecurity. When failing, Kylo lashes out, destroying a wall with his lightsaber. Nearby stormtroopers stop, then slink away; this is their normal. They don’t fight back either.

Rey’s home is a fallen Imperial walker. She has nothing, yet agrees to help a lost droid, a simple act of kindness that changes her life. So too it is with Finn (John Boyega), resisting First Order control, refusing to shoot civilians, and escaping alongside a rebel pilot. Those who have nothing reflect the best of us; those with everything only want more. Empathy is the defining heroic trait.

Force Awakens climaxes on a rebel/resistance attack, X-Wings diving into a trench to bring down a Death Star redux. That’s unforgivably routine and blatant. Like mistakes in the Star Wars prequels, creative errors tend to overwrite what’s done well.

Modern society prefers the negative, it seems, ignoring an emotional send-off for an endearing character, and the politically dire circumstances that place Force Awakens properly in the series. Much as Han Solo repeats his missteps in remaining centrist, so too does the First Order in building another planet-destroying death machine.

The difference? The First Order believes the Empire wasn’t bold enough, gripping tighter, and choosing to ignore any worries of being an independent body – instead, they blow up the Senate. Such a fight cannot be ignored. Much as Force Awakens is about Rey and Finn, it’s equally so about Han Solo atoning for his indifference as the First Order gained control. Yes, complacency can doom us all. 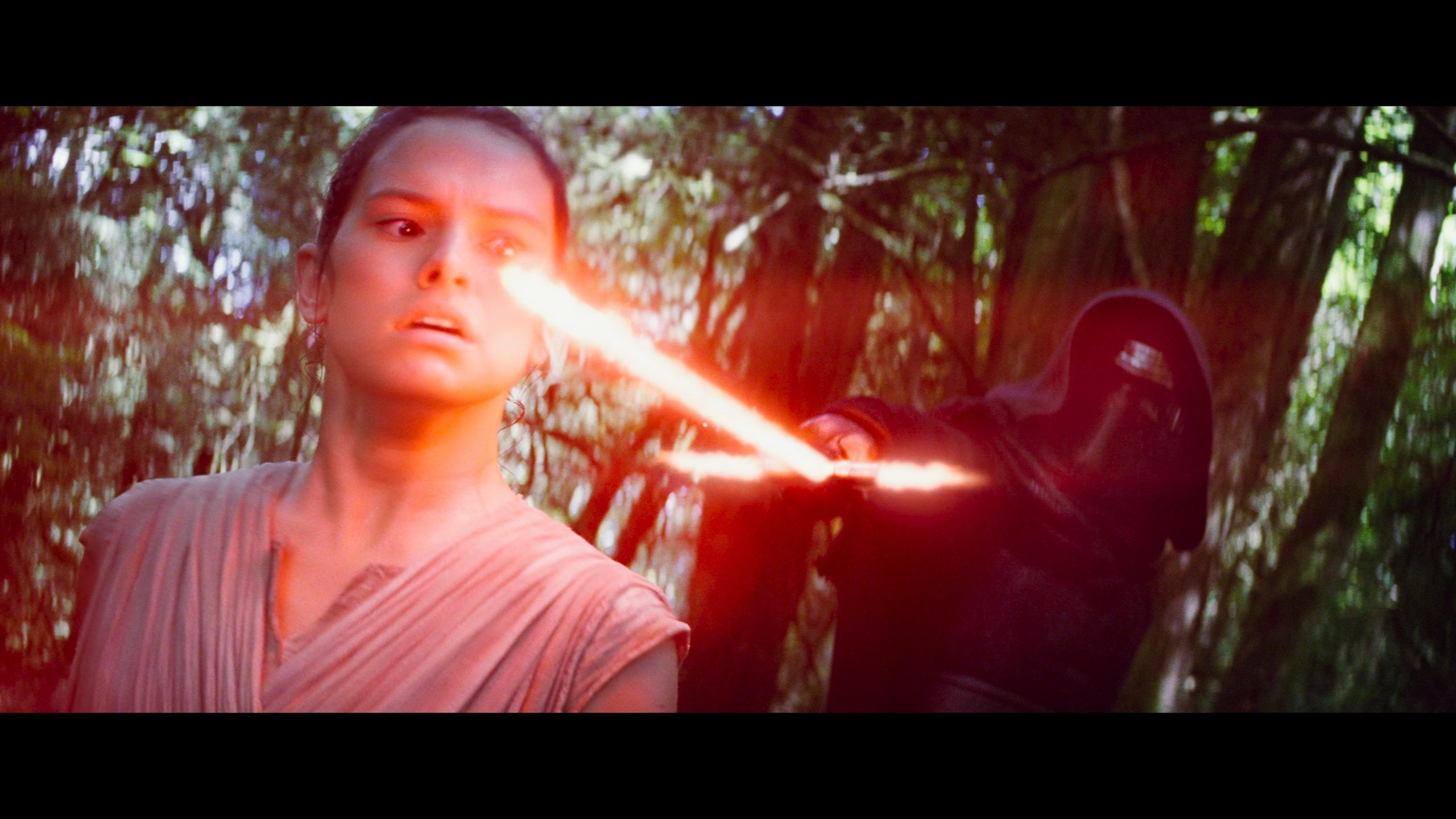 Shot on 35mm (some 65mm, too) and mastered at 4K, Force Awakens lacks the bite typical of true 4K presentations. This is more akin to a 2K upscale, where the images look fantastic, but missing the sharpness that makes 4K so pristine.

Addendum: Conflicting information makes it difficult to pin down the finished resolution. An interview in American Cinematographer states a 2K DI. Other reviews of this release state a 4K DI. Leaving the review as is, but it’s important to note.

In all of this, color grading boasts improvements through natural hues, lifted by the tech. Again, explosions erupt, carrying fireballs up to brilliant oranges. Warmth on Jakuu, the dense blues on Starkiller Base, laser blasts, and ship engines all display increased prominence.

After the 2D and 3D Blu-ray discs featured DTS-HD, this UHD is the first home release containing the theatrical Atmos track. That’s overdue. Channel separation is akin to magic. Open spaces send Snoke’s voice wide, and Kylo/Solo’s meeting on the bridge tracks each footstep and word, echoes spreading to each speaker. Ambiance in docking bays excels. When action erupts, height channels find as much use as surrounds. Debris fields wash over the scenery, vehicles pan front to back (catching the overheads in the move), and lasers travel point-to-point.

While not a complete loss, Disney’s touch factors into the low-end. Compared to even the original trilogy, dynamic range recedes in Force Awakens. That’s unfortunate. Bass amplifies blasts and force powers, if missing the extra punch that defines modern tracks. In comparison to the DTS-HD track of old, the Atmos doesn’t hold the same weight.

Disney copies the previous releases. JJ Abrams goes solo for this commentary track, only available on the Blu-ray. He’s soft spoken, a little tired, and routine. Nothing juicy, just a typical production rundown with first-person insight.

On the bonus disc, extras begin with the four chapter, hour long Secrets of The Force Awakens. This follows production beats in order, from bringing the series to a new company, hiring Abrams, shooting, designing effects, and repercussions of certain story decisions – well produced and insightful.

Seven featurettes follow, all under 10 minutes, most of them significantly shorter. A clip show from a table read barely breaks four minutes. A great peek into the process of making practical creatures is worth the time, and so is the six-minute Building BB-8. A look at lightsaber choreography follows, with the rest of the disc leaning toward the commercial side. ILM is given praise for their work, as is John Williams. Four more featurettes after that (pulled from the 3D release), including nice looks at foley work, audio design, costumes, and weapons. Together, those featurettes run 25 minutes. Scavenger and the Stormtrooper sits down Daisy Ridley and John Boyega to chat about their time on the film. This runs near 12-minutes.

With perspective offered by hindsight and the series’ conclusion, The Force Awakens fits better into the greater arc than previously noticed.