The greatest insult to the Empire’s rule isn’t seeing two of their planet-destroying Death Stars crushed by rebel forces (or a destitute farm hand). Rather, that authoritarian control is unraveled by a race of primitive creature still using sticks and stones. It’s equivalent to Mel Brooks playing Hitler – a lasting indignity to those most deserving.

“Your overconfidence is your weakness,” Luke Skywalker retorts to Emperor Palpatine, and it’s true. Each of the Empire’s failures comes from a place of ego, believing themselves all-powerful and their rule absolute. Here in Return of the Jedi, it’s truer than other films in the trilogy.

Return of the Jedi sends Luke (Mark Hamill) back to the staring line – Tatooine. At one time, Tatooine was a place isolated from the Empire. In defeating the rebels, rather than separating them, the Empire brings heroes together even from outlying planets. Fear no longer rules, and a once nothing planet rallies an entire movement.

If not yet obvious by Return of the Jedi, the fascist Empire’s allusions to Nazism becomes absolute

With its first act, Return of the Jedi plays to a male fantasy, envisioning Leia (Carrie Fisher) in revealing slave garb. It’s less about making Jabba the Hutt evil than showing skin, even if Leia overcomes her captor. Certainly, Leia established her want to fight already in previous films. More broadly, Jabba’s loss becomes a dry run, where characters like Lando (Billy Dee Williams) confirm which side they stand for. Everyone is in sync, bonded through adversity, and capably withstanding conflict.

Return of the Jedi feels like a galaxy joining as one. Where in A New Hope, the Mos Eisley Cantina saw aliens ignoring their surroundings through drink, traditional full circle storytelling brings beings of all types into this fight. The Empire, however, is all human, driven by hate. Their bias is unspoken, only seen. In choosing to rule all, they represent only their own. If not yet obvious by Return of the Jedi, the fascist Empire’s allusions to Nazism becomes absolute, and the fight against them led by a kid who, only a few years earlier, spent his days farming moisture. How appropriately humiliating. 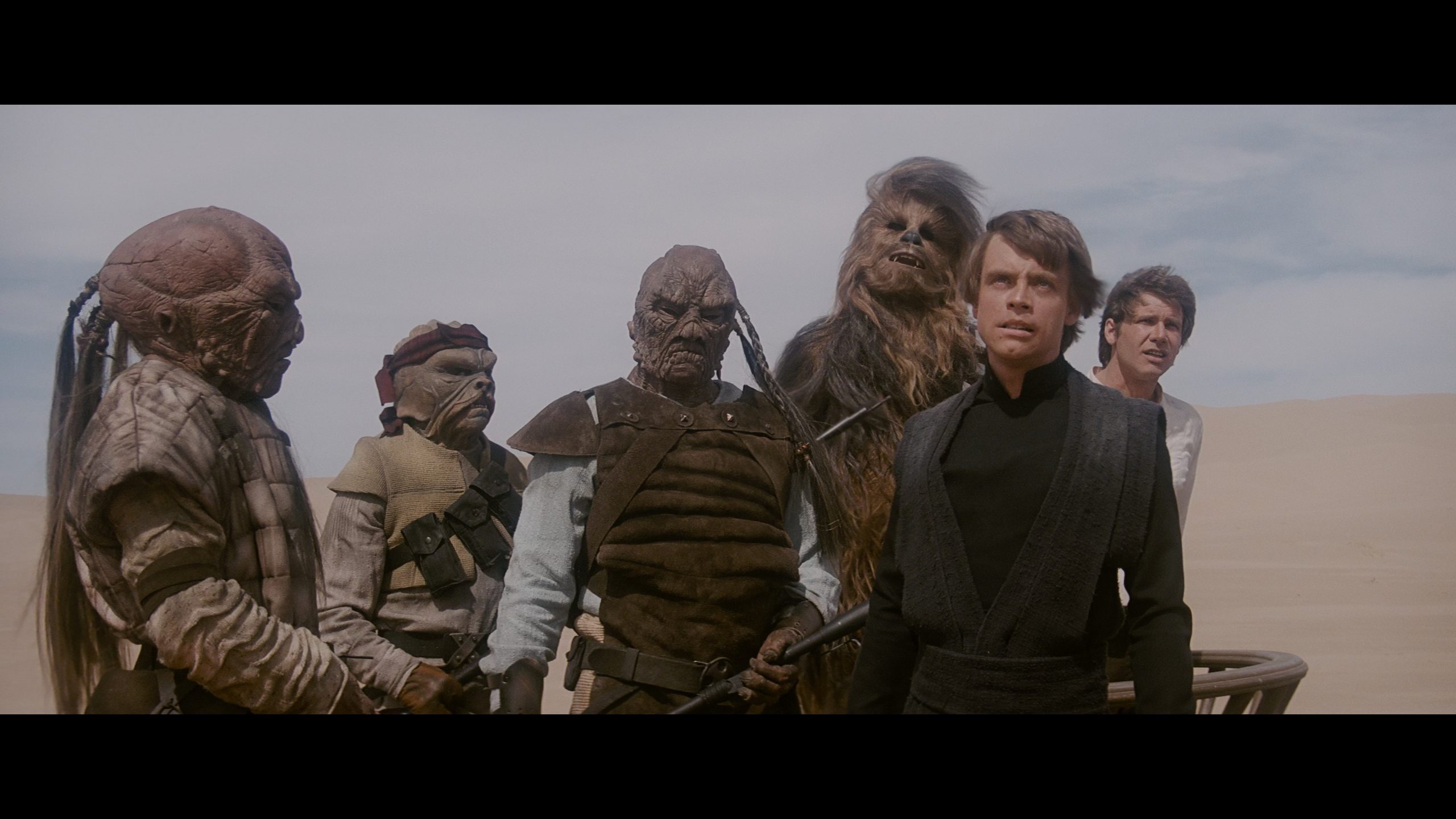 Sadly suffering the same fate as the other original trilogy films, this older master is due for an update. While the scan is sufficient in resolution – notable in close with fidelity-rich facial texture – significant DNR robs detail from Return of the Jedi. Unneeded processing gives medium and long shots a fuzzy, imprecise look. Additional grain reduction hammers shots before wipe edits, over aggressive in tackling the film stock. That leaves much of the runtime playing back in a smeary, plastic, digital aesthetic. With remaining grain mostly frozen in place, the gritty texture never looks natural, and even causes banding (watch the exterior light as Luke first enters Jabba’s palace).

A boost from deeper color draws out Endor’s greens and Tatooine’s sand. Flesh tones excel too. Bolder hues make Jabba’s Palace interior come alive, with the creature variety more apparent. Watch too for Jabba’s skin, coated in earth tones, and exquisitely applied. This disc brings that artistry to the forefront.

Blistering Atmos work brings Return of the Jedi into the modern sound era with no complications. Jabba’s boomy voice is the LFE’s early indicator, beginning to blossom as Star Destroyers pass. The barge explosion sounds richer than any release previously, and speeder bikes clash on Endor with superb weight.

Any action scene works, but the speeder bike chase brings everything. Faultless channel transitions use all speakers. Heights employ constantly, generous in placing passing leaves or the bikes depending on the shot. Return of the Jedi never relents, spreading Palpatine’s electricity, dogfights in a fully dimensional way, and even ambiance during the quiet on Dagobah. Marvelous.

George Lucas, Carrie Fisher, Ben Burtt, and Dennis Muren come together for a commentary. An archival commentary comes from the thoughts of 27 different cast and crew members as they recall their experiences.

Pop in the bonus disc for everything else. Four of the effects crew come together in a roundtable that runs nine minutes. Ben Burtt’s sound effects get their due by digging up props Burtt used. A documentary follows the creatures in a 1983 made-for-TV promo running 48-minutes. Collected interviews combine for 15-minutes. For almost 20-minutes, deleted/extended scenes play out. Puppets, miniatures, and more in their current state (mixed with interviews) play out in an attractive reel. That’s 37-minutes total.

Vibrant, fun, and energetic, Return of the Jedi gives the Empire a perfect undoing while finding closure to the family drama.