Destroying the Death Star in A New Hope accomplished little, it seems. Empire Strikes Back finds the rebels crammed onto an inhospitable ice planet, in hiding, with even less freedom than before. When discovered though, Luke Skywalker’s co-pilot says, “I feel like I could take on the whole Empire myself.” A new hope indeed.

Empire Strikes Back ends in failure. Again, the rebels go into retreat, scattered or imprisoned. They gain nothing in the greater war, and if anything, lose the little ground they once held. Compared to A New Hope, it’s less a film about the value of victory than one about the purpose of loss.

Much the same as a general psyching up troops with a dramatic speech before storming an enemy stronghold, Yoda instills confidence and power when needed the most. Yoda’s funny. He’s charming and clever. To Empire Strikes Back, he’s also everything. Star Wars’ morals and philosophy reject failure; through Yoda, the Force is less a skill reserved for the few, rather something harnessed by those willing (prequel lore botching that idea).

Empire Strikes Back makes everyone family

Light and dark appear through Luke’s Jedi training. It’s how people control, influence, and impact others. Yoda admonishes Luke for his lacking belief: “That is why you fail.” Empire Strikes Back then cuts to Darth Vader choking his latest commander – the third in this film alone. One side projects confidence through their disappointment, the other spreads only fear. Obvious good versus evil, yet written and directed with a marvelously soft hand, against the directness common in large-scale blockbusters.

This isn’t only Yoda, Skywalker, and Vader. Han Solo (Harrison Ford) begins Empire Strikes Back seeking an escape, sames as A New Hope. He’s different now however. Solo stays for romantic interest, but it’s also clear the Death Star’s destruction awakened a selflessness within him. Karma then turns Lando Calrissian (Billy Dee Williams) against Solo, Calrissian relenting to the Empire’s demands, much as Solo avoided the conflict prior. His own character flaws now stand before him like a mirror, forcing him to accept his mistakes.

The saga as a whole relies on family dynamics. It’s central hook concerns fathers, sons, mothers, daughters. Empire Strikes Back, with a significant, influential pop culture twist, solidifies that theme. In defeat though, the rebels still bond. Those disagreements and doubts, common to any family, fade in the end. But a few minutes before the credits, Chewbacca choked Calrissian. Now they pilot the Millennium Falcon together, searching for their common friend. Fear passes in time. So too does discouragement. Empire Strikes Back makes everyone family. 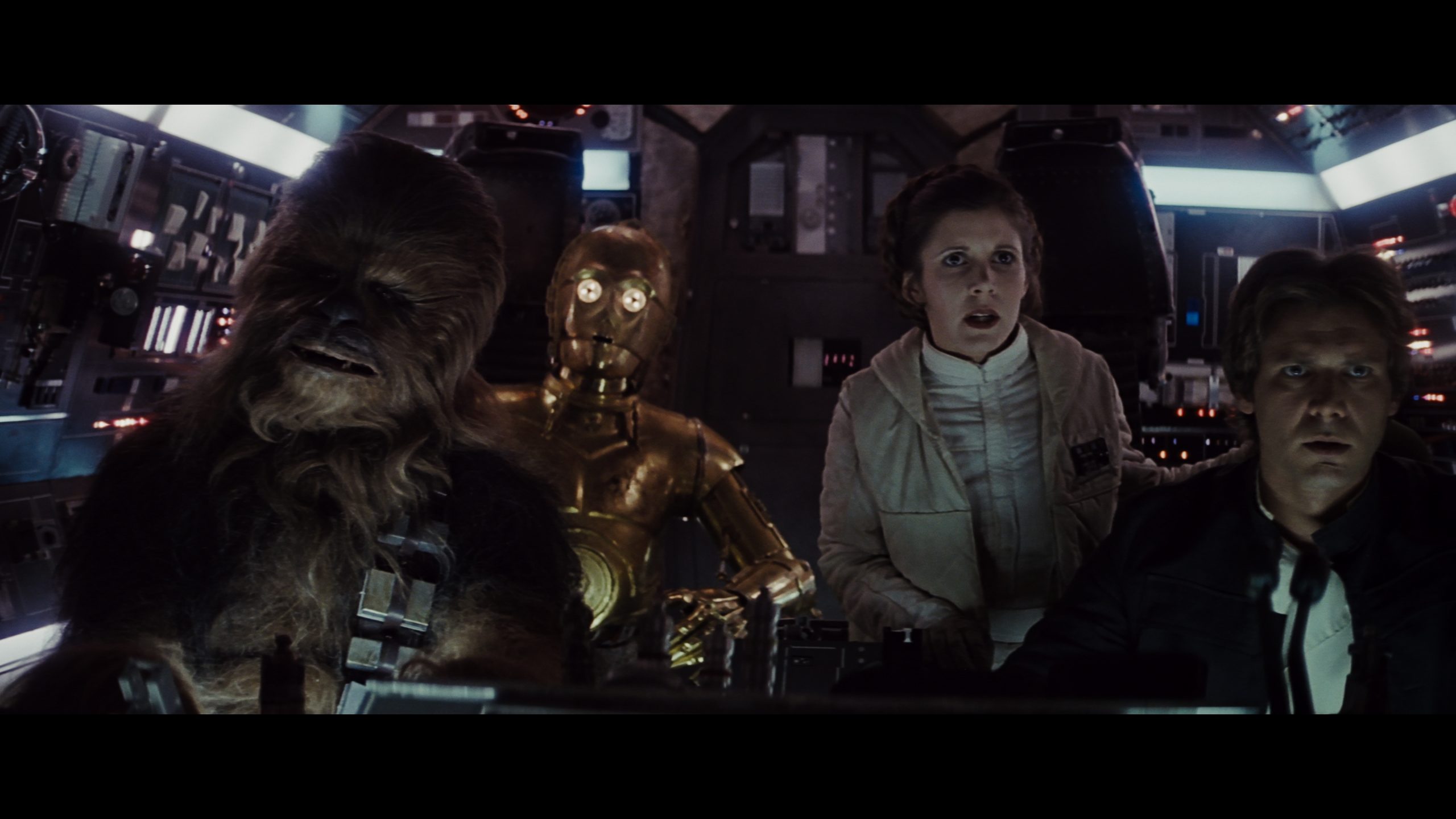 At a glance, Empire Strikes Back fares well on UHD. Static close-ups bring superlative definition and texture, clearly making use of the extended resolution. Facial detail is gorgeous… at times.

Sadly, this master suffers noise reduction, at times heavily so. Grain stays in place, stuck to the backgrounds. If moving at all, the images buzz, akin to mosquito noise. Empire Strikes Back doesn’t look like film stock, rather a digital image. Those attempts mar whatever pristine quality exists in the 35mm negative.

While ‘80s era composites caused degradation, this presentation doesn’t admit such. Those shots, say from inside the Falcon’s cockpit out into space, receive even heavier processing. Smoothness turns images into a muddy mass, lacking any organic firmness, and in turn, wiping detail. Light ringing intrudes too, if uncommon overall.

Color density does improve, although steering toward digital hues. Hoth’s blue turns to modern grading for its look, as do those scenes on Dagobah. Mastering zaps film’s natural richness. That doesn’t mean saturation is failed or lost. Certainly, primaries elevate (the orange flight suits). HDR adds an energy burst to lasers and explosions, if otherwise sedate in application.

Sensational new mixing brings Empire Strikes Back a new life. Already active in other home releases, Atmos spreads sound effects wide. On Hoth, when the base takes a hit, debris falls from the ceiling, naturally panning between height and surround channels. Passing through the asteroid field, rocks ping into positional channels, enveloping characters and listeners. Steam sprays wide as Luke and Vader clash. Even ambiance stretches, whether winds on Hoth or wildlife on Dagobah.

Bold low-end support keeps up its energy, tight enough and integrated well as to believe this was always in the mix. Ship engines pass and lasers hit targets exceptionally, generating thrust to match the scale.

Nine minutes of taped interviews, conducted during filming of the original, are provided here for the first time. A matte painting showcase is next, running near five minutes. In 2010, a number of interviews with key players (Kershner included) let everyone reminisce for 25-minutes total. Dennis Muren explains his animation in a brief teaching session that only lasts two minutes. Another interview collection runs almost 27-minutes. Deleted/extended scenes make it a little over 14-minutes. Then, nearly an hour is spent showing off models and miniatures, along with interviews.

Star Wars’ centerpiece remains a stellar work as Empire Strikes Back uses a nuanced approach to break from A New Hope’s emotional high.