By Revenge of the Sith’s end, Palpatine has brought the galactic government’s downfall, enough so that he turns Senate seats into literal weapons. After two films concentrated on political maneuvering and bickering, this marks a definitive end to any debate.

Watching sequentially, the Star Wars prequels come and go in quality. Uneven, sloppy, inconsistent. What works though, other than the absurdly raw symbolism above, are the politics. It’s little things – Mace Windu (Samuel L. Jackson) previously defended the Jedi as peacekeepers, not soldiers. In Revenge of the Sith, he’s ordering battalions to attack, not negotiate. Palpatine’s plans destroy power structures and ruin control systems. “Good is a point of view,” he says to a manipulated Anakin (Hayden Christensen), as if slaughter is ever righteous.

George Lucas saw Revenge of the Sith playing out decades before it entered production, or so he says. Looking back 15 years since its release, there’s striking context for a post-9/11 world. Palpatine (Ian McDiarmid) is given full control by promising a “safe and secure society.” All that he does to form the Empire comes from an ideal, born from fear and instability. “This is how liberty dies, to thunderous applause,” bemoans Padme (Natalie Portman), watching the galaxy collapse. It’s a meaningful target for ire, an attack based on lies, of which the populace is unaware.

Of the prequels, Revenge of the Sith fares the best

Revenge of the Sith turns Anakin toward his path as Darth Vader. That’s expected, but it’s a matter of this script bottling that anger in a compelling way. Personal fears lead to revenge based on false premises and bogus motives. Perfectly routine philosophy, conveyed, however, from a nation in flux, even through the hokey, dorky dialog.

Of the prequels, Revenge of the Sith fares the best, still hampered by pitiful dialog, if doling out the totality of Lucas’ vision. Anakin’s turn feels legitimate, Palpatine’s power grab plausible, and Obi-Wan’s empathy (until the end) the Jedi’s final light. The finale stages an engrossing lightsaber duel amid lava, imparting the sheer disdain between Obi-Wan and Anakin in each strike.

Where most Star Wars entries close on large scale space/ground battles, Revenge of the Sith eschews the formula (front-loading those scenes in the first act) to focus on intimate clashes. All that Lucas sought to do in Phantom Menace shows here, with technology able to keep pace rather than distract. While still thick in digital visuals, here they sustain focus, add scale, and thematic weight. 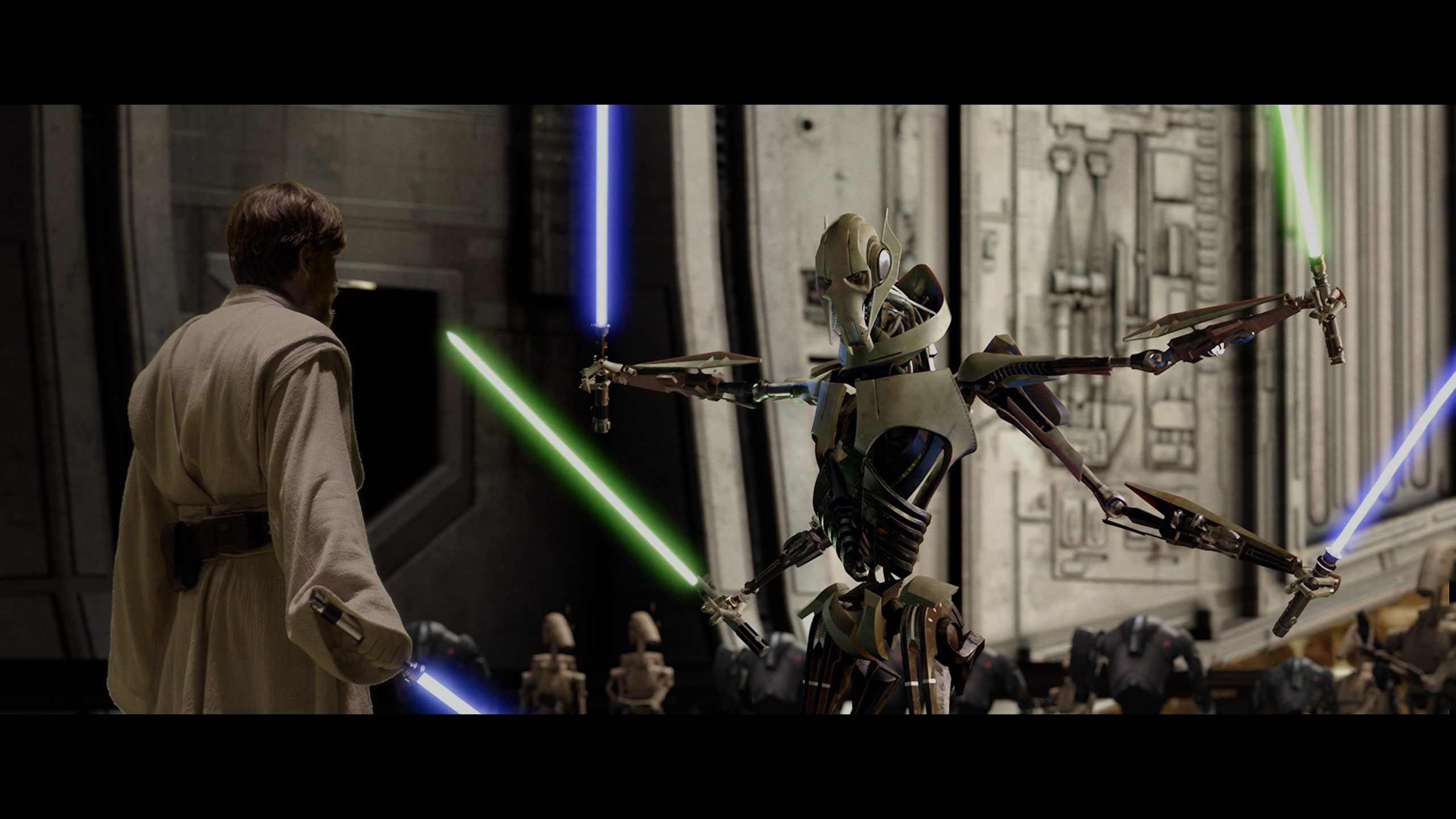 Although still maxed at 1080p, Revenge of the Sith’s visuals greatly improve over Attack of the Clones. Digital camera tech upgraded that fast, leading to 10-bit color. In 4K, this is an upgrade over the Blu-ray. Deep color proves effective, bolstering the palette, and enriching primaries. Flesh tones reach total accuracy. Overall saturation gives the fantasy worlds a notable glow.

Likewise, this is the purest HDR pass of the prequels, again thanks the source’s progression. Fantastic contrast peaks add awesome vibrancy to Mustafar’s lava. Explosions and lasers sizzle as they stretch across the frame. Lightsaber density matches that of the sequel trilogy. Black levels stay a sore spot, unfortunately. Crush is far too common, particularly with Anakin’s darkening robes.

An overlaid grain filter seems new (if at this thickness, anyway). The encode handles this, if making the static CG backdrops stick out harshly when their low resolution details look frozen in place. Overall detail finally looks organic, pleasing textures naturally defined in close. Revenge of the Sith isn’t without errant processing however. Wide shots suffer ringing and edge enhancement in various degrees. Aliasing, especially around composites, becomes a persistent problem. Upscaling can only do so much.

While lacking in range compared to the other prequel’s Atmos tracks, that’s a limited complaint. Bass still excels, from the first shot of an early Star Destroyer panning around to tight, focused explosions. Lightsabers hum aggressively, while locations like Mustafar keep a pronounced rumble for their duration.

Height channels tend to go underutilized in upscaled Atmos mixes, but not here. As lava begins splashing up toward Obi-Wan and Anakin during their duel, droplets hit metal with brilliant precision. It’s notable and placed flawlessly. Everything else works too. When spun, the electrified staffs used by Grievous’ guards pass each speaker. Ships fill the soundstage effortlessly, adding to an already pristine home theater track.

Revenge of the Sith pays off two movies worth of political maneuvering, delivering thematically and with its action.