The fracture in The Phantom Menace begins over a seemingly benign trade dispute. The Simpsons famously mocked that idea by showing a AT-AT smashing into the Senate chamber, then sitting down and listening to the debate. In parody, there is truth.

Phantom Menace isn’t without purpose though. Dull and sedate as it too often seems, the blabbering politicians and arguments fit into Star Wars’ long term goals – George Lucas wrote these stories with World War II in mind. In Phantom Menace, the Senate rejects a plea from the planet Naboo, deciding instead to send a commission to prove Naboo is under attack. Few satires better extrapolate the absurdity in leadership to deny the obvious.

Underneath the delays, Senator Palpatine begins a plot that will lead to the Empire’s creation. That’s what The Phantom Menace is trying to say: innocuous bickering over trade often boils over to war. No one notices the little things. Hitler seemed irrational but easily ignored, until fascism took hold. Here, those indifferent people come packaged as the Gungans, an underwater race waving their hands at any suggestion they help those on the surface. The Gungan dismissal (at first) leads to war, and then a domino effect that gave birth to Star Wars’ later chapters.

Defending The Phantom Menace isn’t easy. It doesn’t deserve praise in any grand way either. Quite often, it’s a dismal movie, and while political squabbles look ahead for greater context, those themes stretch over two hours. The opening text crawl handles this just as well.

Then comes Jar Jar Binks, the lambasted cartoon character turned into frequent fandom mockery. While justifiably criticized for embarrassing, tonally divergent antics (ruinous to the brilliant Duel of the Fates lightsaber battle), Jar Jar’s racial stereotype implausibly happened in 1999. His crushingly tone deaf dialect would grossly stick out in the ‘80s, ‘70s, or even the ‘60s. Jar Jar is a tell of how little pushback George Lucas received in developing Phantom Menace.

Warts and pimples and boils and all though, Phantom Menace did reach a generation of kids. Pitiful writing and shaky performances aside, Anakin (Jake Lloyd) reached new fans. His story, making the choice to defy the path in front of him, is inspiring. “You can’t stop change,” his mother says, instilling a critical life lesson through Star Wars arguably better than anything Luke did in A New Hope, despite following the same arc. If only Phantom Menace didn’t treat it all as if seen from Anakin’s childish eyes. 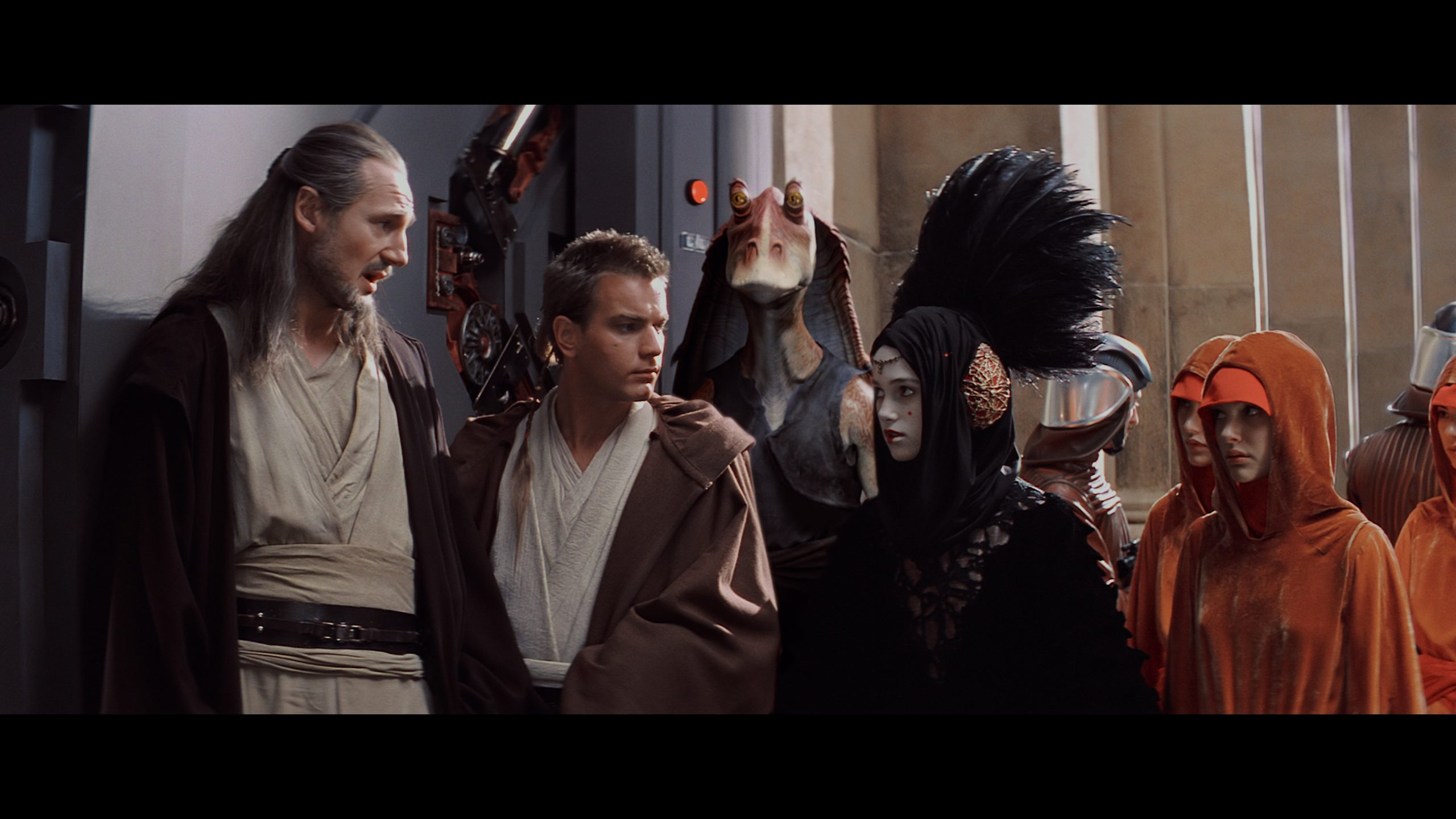 The thing to consider about Phantom Menace is how revolutionary it was. Digital effects were not at this level by 1999. A lot of technology came together to make this movie happen. Spotting a low resolution background here, an aliasing line there (both made increasingly noticeable as resolution improves), that’s understandable; what’s not is how awful this looks overall.

This transfer is smothered in processing, leaving being a ghastly, smeary style. Detailed this is not, making beards look like solid chunks of wax, skin akin to smooth reptile scales, and textures oily. Only some shots escape, nearly all of them coming during the dinner at Anakin’s house. Even then, it’s an edit-by-edit quality jump before receding back to the gunk.

Add ringing, halos, and noise to complicate things. Shot on 35mm, grain is all but unseen, wiped out alongside the detail. Medium or wide shots suffocate due to heavy manipulation, imprecise and edgy.

Issues continue with unforgivable black crush. The HDR pass does nothing to help. Certain digital effects may escape ire, but the rest, not so much. Darth Maul’s Sith garb is a black mass without leniency. When asking Obi-Wan to test a blood sample, Qui-Gon’s head becomes one with the skyline. Certain highlights benefit in this new tech era (watch as a door turns molten from Qui-Gon’s lightsaber), but even this isn’t enough to overcome those brutal shadows.

Worries of Disney ruining the Atmos tracks were unfounded. This is magnificent, reference grade material, and a stellar example of what Atmos adds. An expanded soundstage sweeps into the surrounds and stereos as always, since DVD. Now though, that precision is amplified, not only smoother in transitions, but taking advantage of the height channels. Ships pass overhead, ambient forests push sounds above, and during the climactic war, debris fields fill each speaker.

Forever a design masterwork, the pod race gains on its already flawless presentation. That’s helped with massive low-end support, sensationally weighted and powerful. That goes for everything, giving explosions dominating kick and range. Each blast pushes enough air to be felt, appropriately scaled to the action. Lightsabers hum in the best way, and force powers jolt.

Disney includes the extra disc from the previous Blu-ray. Note the UHD does not offer the George Lucas (and others) commentary, only the Blu-ray.  On the extras disc, a few brief interviews include Doug Chiang (5:23), George Lucas discussing digital filmmaking (7:51), and the model team (4:17).

The Beginning, an hour-long documentary, follows the production in the “Legacy” section on the disc. Continuing there, the theatrical edit of the Pod Race, a fly-through of the archives, additional interviews, deleted scenes, and digital model gallery come up for the finale.