Sweatin’ for a Cold One

Two British soldiers, a nurse, and suspected Nazi spy walk into a bar. That’s what Ice Cold in Alex is leading to, not a joke set-up.

Released in 1958, Ice Cold in Alex is a healing post-WWII film. Stranded in the African front’s deserts with few supplies and a crippled ambulance, the foursome head to the British front, hoping to get there ahead of any Germans. John Mills stars as the Captain, the war already turning him into an alcoholic. Ice Cold in Alex accepts the disease as an inevitability, with other characters worrying, if understanding.

It’s a matter of working together, an ages-old parable, set during a volatile time in history. Survival becomes key, not the conflict around them (bombs and mortars echo in the distance) Broken shocks, an overheating radiator, and sand traps stress this makeshift team. When under pressure, borders don’t matter.

View Ice Cold in Alex as a road movie in wartime, but one empty and hopelessly isolated under a baking sun. The scenery looks hot, even without the sweaty, shirtless bodies pushing the truck through quicksand. It’s uncomfortable to watch, let alone for those who lived this.

Solitude and a common goal keep everyone working as a unit. The imposing Anthony Quayle plays the (possible) German, and while distrusted, it’s more important to keep moving out of this desert rather than accuse.

War changes people, from those who actually fought to those at home. Ice Cold in Alex acts a calming force for good. Residual hatred and anger over Germany’s heinous actions ensured animosity continued between nations post-war. Here’s a film that, rather than glorifying victory, somberly reminds us how equal we are, extinguishing the Nazi’s disdain with one of their own coming to a realization that counters nationalist propaganda.

One scene involves gunfire. That’s Ice Cold in Alex’s only violence, a war movie not about war, but the bonds war creates. The tone is tense and stressful. Emotional breakdowns happen. Yet Ice Cold in Alex remains light, not aggressive. Some final lines encapsulate the experience. “All against the desert, the greater enemy.” Replace desert and that’s applicable to anything, from climate change to inequality. More than a post-war film meant to mend, Ice Cold in Alex conveys truth decades later. 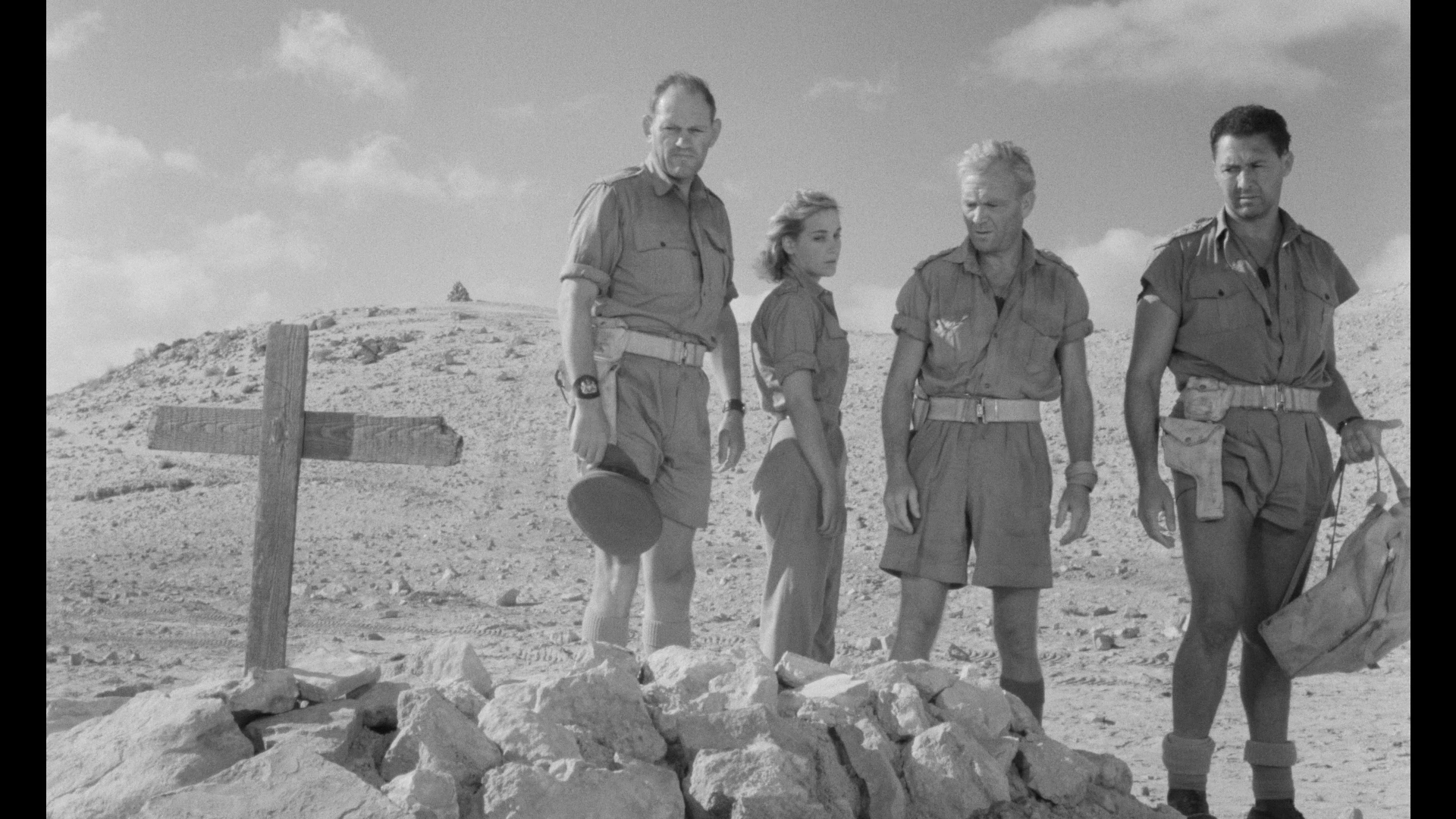 Sweaty faces and heavy sun invite gobs of detail. A new high-res scan brings all of its power to this Blu-ray, giving Ice Cold in Alex revealing sharpness in the modern era. Definition soars, not only in reference-grade facial texture, but the desert sands too. In close, individual grains begin to show. Wide shots show the loneliness in full, minus any mastering distractions.

Mild grain maintains consistency, expertly resolved by the encode. Minimized damage appears as scratches and dirt, nominally invasive even at the worst.

Although set under heavy sunlight, Ice Cold in Alex lacks in gray scale. Or, gamma is set too high, as black levels excel at night. Mid-tones disappear, the aesthetic marginally washed out, if enough to lessen how great this transfer is otherwise. That’s a shame given the expert-grade effort everywhere else.

Pushing hard on treble causes the score to wobble slightly when hitting the upper registers. The score primarily stays there too, so that’s a bummer. Age will do that.

Dialog occasionally snags on similar faults. Most of it is fine though, just harsh in the analog style of the day. Uncompressed PCM can’t counter those limitations.

A war film without war, Ice Cold in Alex focuses on healing the international divide post-WWII through a smartly composed desert trek.

The 15 unaltered images below represent the Blu-ray. For an additional 26 Ice Cold in Alex screenshots, early access to all screens (plus the 100,000+ already in our library), 100 exclusive 4K UHD reviews, and more, support us on Patreon.